This coming week is the run-up to half term...

Last week was the last (just about) of the shuffled rescheduled weeks. It took a fair bit of concentration to make sure I was in the right place - and during the week I managed to find

my "piano-teaching" pencil case, packed with all sorts of necessities such as reward stars, post-it notes, mini folding scissors, pic-n-mix activity cards, dice for use with the cards, coloured pencils, pencil, but no pencil-sharpener/rubber as I had already lost that (left behind in a school where I don't teach piano - how did that happen?)

I know that things have drifted too far from routine when I start losing things all over the county.

"Unusual events" this week were a school music festival, which meant moving one school to another day, and a day up in London for routine clinic appointments which meant rescheduling four piano lessons, to earlier in that week, or into the coming week. It all makes for a lively time!

The clinic appointments were all very reassuring - routine check-ups along the lines of "no change, carry on as you are". I had been a bit apprehensive (to be honest, each time I usually am) in case things have altered, so I left the clinic happier than when I had arrived. When we had arrived. Of course he came too!

Afterwards, after lunch, we caught the bus back into the centre of London, stopping off at the National Gallery. We have a celebration coming up later this year, and we're working on various scenarios. One is that we just announce a date and location for afternoon tea somewhere, and the gallery was a thought. I don't know, maybe I just wasn't in the mood for art. We had a look round the Chris Ofili exhibition  because it was free

but all the Titians and Rubens and Grand Masters were too colourful and too intense and too Greek Legends and Too Much. The only things that caught my attention were Frank Auerbach drawings and sketches in the Espresso Bar. I've tried to find the ones he made of Turner's painting of Calais Pier


but I can't. You'll just have to google around until you trip across one. Then we had a nearly-good cake and drink in the cafe. Through the window we could see an old friend. 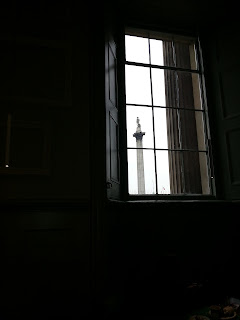 Wherever we pick for the celebration it probably won't be the National Gallery!
Posted by KirstenM at 22:13:00