To cut a short story shorter, we ended up having lunch at an unusual, but very elegant tea-shop. I'll keep the story even shorter, but when did you last have your tea-shop tea served on vintage china, with a real teapot? 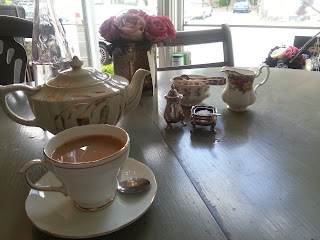 And check out that sweet little salt pot and spoon!

After delicious smoked salmon sandwiches and salad, we had equally good cake.

We were on another round exploring local churches. We had intended to visit three, but it was too hot, and we spent too long in the teas hop, so the medieval church of St Mary's Bletchingley was as far as we got.

The church hasn't changed much either;


Who would have known that Bishop Desmond Tutu spent some time as a curate here?

from his wikipedia page;

Tutu then attended King's College London, (1962–1966), where he received his bachelor's and master's degrees in theology. During this time he worked as a part-time curate, first at St Alban's Church, Golders Green, and then at St Mary's Church in Bletchingley, Surrey.[5] He later returned to South Africa and became chaplain at the University of Fort Hare in 1967.