Who would ever have thought that this, back at the beginning of April, 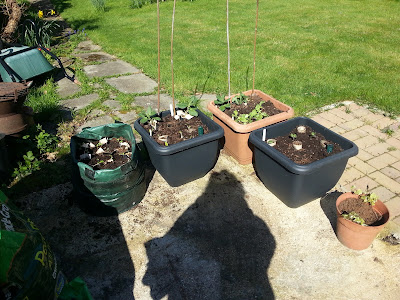 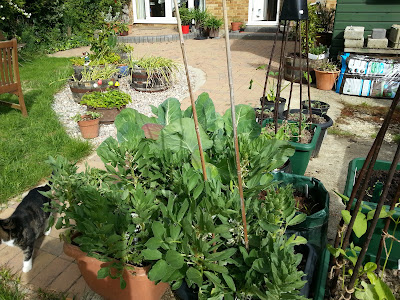 The brown and black square tubs with sticks in them are now overflowing with broad bean plants, and the huge leaves belong to the nearly invisible brussel sprout seedlings in the first picture. We've eaten all the first batch of lettuces and pak choi and radishes and spring onions, and very good they were too. The spinach was well worth growing; I pick a handful of leaves most days which I store until we have enough for a meal - more like a garnish, perhaps?

Apart from the early days, slugs haven't been a real problem. We started with the extremely smelly wool pellets (made of scraps of wool and sheep-poo, according to one source) called "Slug Gone". I guess it is one of those products which tells it like it is on the packaging.

Here it is, doing a good job of protecting the peas I bought in the market yesterday. 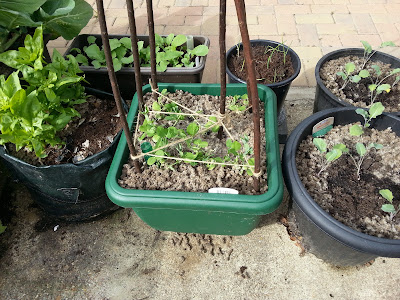 Many years ago I had a few lettuces, bought from a school fete, growing in a trough. I used some plant containers made of tinselly wire mesh that had been used for poinsettias at Christmas, and discovered that slugs and snails can't climb them. The tinsel has worn off, but the pests are just as reluctant to climb up the rust. So, using the same principle, He has made me some chicken wire mats which I am hoping will save his spring onions from destruction. 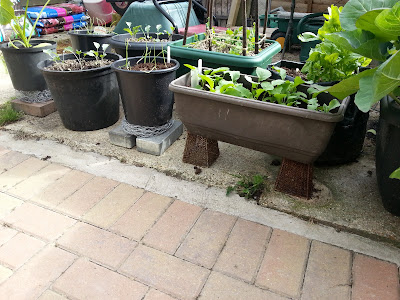 The spare hanging basket frame seems to be thwarting any attacks on the young lettuces; 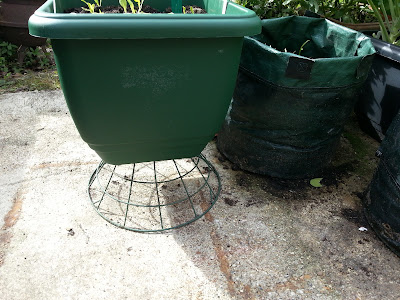 We watered them all thoroughly, which means that it is sure to rain tonight. Now that we have all these containers that need watering, I take quite a different view of rainy days.