There is nothing like knitting for learning patience, perseverance, and all sorts of goodly and desirable virtues.

And also for increasing one's vocabulary of unfortunate and inappropriate words and phrases.

This yarn is called Bamboozle 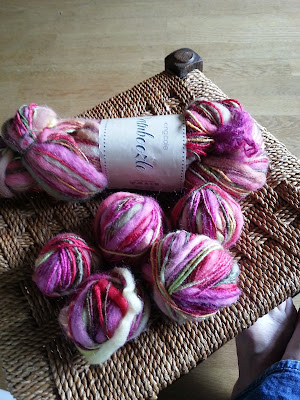 It comes in hanks, which have to be carefully laid out and rolled into a ball before you can knit with them. Notice - FIVE little balls of wool beside an the hank. That's because they came from a hank which had four joins in it. Unimpressed.

Here is the front - the yarn has random changes of colour and also of thickness - one moment you are knitting with slippery, silky-soft thin yarn, the next moment it has turned into something more like cotton wool. It is surprisingly easy to manage, though, and I love the finished texture. However, it is extremely difficult to measure how long or wide the piece is, which is why I haven't ended it off, but left balls of yarn attached at the top in case I need to add some more. 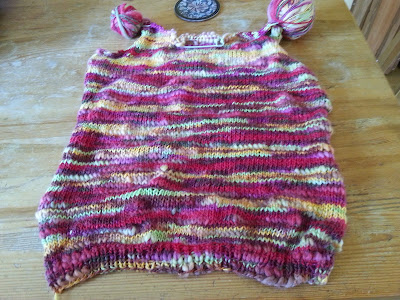 Which means I have to knit the sleeves next, in order to lay the pieces together to see if the armholes will be the same size for the front and the sleeves.

I could have shown you a finished sleeve. At the weekend I had almost completed it, but then I discovered a mistake right down at the cuff. And then another mistake right at the start, when casting on the stitches to begin knitting. I went through the usual process;

step 1; stop and consider whether it mattered
step 2; surely no-one would notice
step 3; actually it would show
step 4 rip out the knitting and gather up the mental strength to start again.

No matter. I have another WIP to turn to; a blue medium-weight jumper I started in the Spring. It is knitted using a method called "top-down". You use "circular" needles 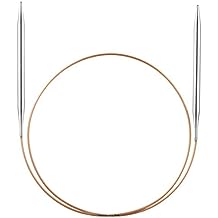 which means that you can knit round and round in circles. So, for a "top-down" jumper, you cast on for the neck, knit down as far as the shoulders, leave stitches on a holder to add sleeves in later, and continue down to the waist. Then you get some needles joined by a wire, go back to the hole you left for the sleeve and put those stitches on the needle and knit the sleeve down to the cuff. Are you with me so far? 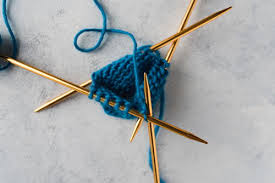 you spread your tube of knitting around three (sometimes four) needles, and use another one to knit with. So you knit the stitches off a needles onto the spare needle, releasing a needles to knit the next lot with. I thought I'd try this technique with the second sleeve. Big mistake - I was well down the second sleeve when I discovered that my knitting was now much looser, so this sleeve was about an inch wider than the other one.

Deep breath, and rip out the sleeve. So, my blue jumper looks like this at the moment; 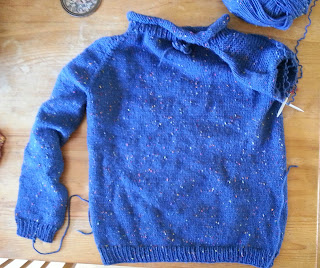 Because of the way the jumper is constructed, you can try it on before it is finished, which I did. I'm relieved to discover that it is a good fit, and I like it very much indeed. Which is just as well, as on Monday morning, after several inches of knitting, I found that I was doing the pattern incorrectly. Sigh. Still, I'm getting good at ripping back the stitches, and then carefully picking them all up again (the secret is to use a finer needle to pick them up). Last night I discovered one incorrect stitch about ten rows back. Sigh. Yes, it will matter. Half-an-hour's delicate work with a crochet hook, dropping the stitch down and working it back up again and all is well.

The advantage of this form of construction is that there will be no seams to sew up - once I have knitted the last stitch and darned in the loose ends, it will be finished. The disadvantage, is that as I knit round and round the sleeve, I have to keep turning the whole garment to untwizzle the knitting. It is also quite a warm thing to have bundled on your lap, which is why I took a break from knitting it during the spell of baking hot weather back in July. I'm hoping I finish it fairly quickly before I forget what I am doing and have to start over again...