I've been growing veg on and off this year -  and every so often we've had a little harvest. Here's todays'; 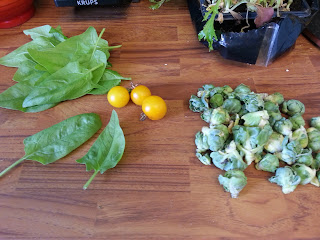 a few sprouts, some spinach, a couple of tomatoes. Not much, maybe, but still very satisfying. To look at, maybe, if not very filling after cooking! There's not much more to be had from the garden now. The spinach is bolting - again - the leaves change to an arrow-shape - but we eat them anyway.

Hanging baskets don't make for a good yield but do defeat slugs. 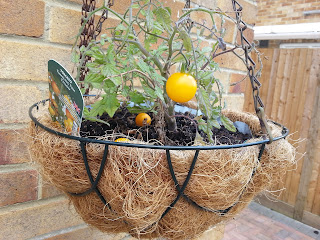 You can see one of my three remaining sprout plants in the bottom of the picture below. I was keen to try these, as we had sprouts in Canada last year which were picked before the frosts, and they tasted very different. The empty containers have been refreshed ready for a winter crop of something or other. 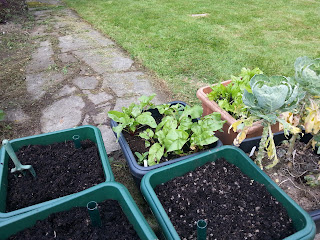 It's been fun to watch them grow from the little bitty seedlings I planted in the Spring. 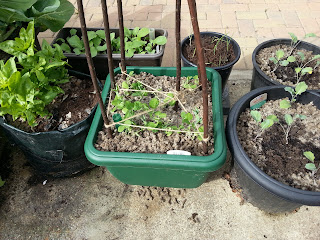 The broccoli was a complete failure. The crushed chicken wire stands did a good job of making life difficult for slugs. But the cabbage white butterflies have laid eggs with great abandon, and their caterpillars have had much more enjoyment from the broccoli that I will ever get. 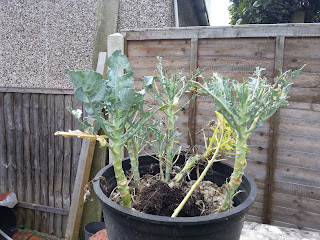 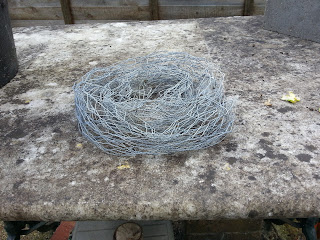 I plan to chit some potatoes and plant them in some of the empty containers in the hope of little new potatoes early in the Spring -maybe even in Winter. So long as I don't forget where I put them... 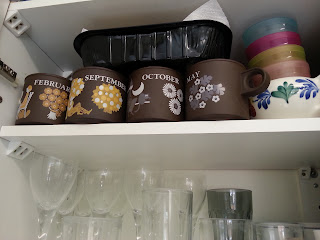