It was cold and sunny this morning, but that has all changed as the afternoon has continued.

Now it is half past two, and the cats have made their feelings abundantly clear. I would have been sitting in comfort at the PC, but one cat, after prowling and meowling for ages, has decided to settle down at last on the computer chair; 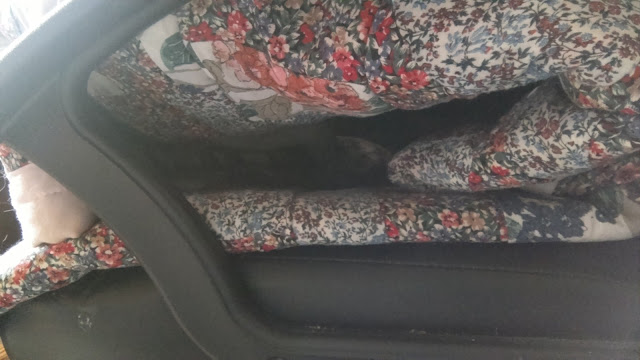 somewhere in the folds of the quilt you might just make out her ear.

The other is asleep on a cushion balanced on the radiator. 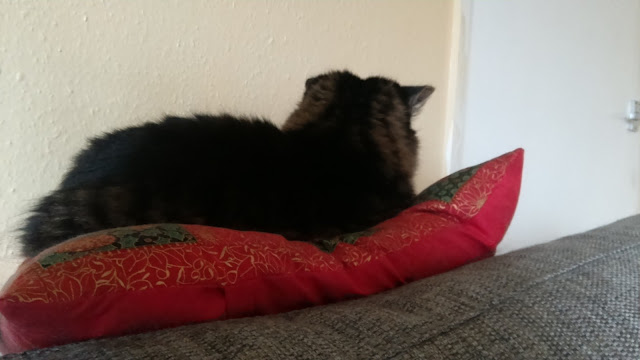 I am going to have to set a limit on my book and Kindle purchases. So I have. But I'm not saying what it is in case I need to make adjustments. I suppose I could try and give up buying books for Lent? That means I would still have just over a week before Ash Wednesday on 14th February. I've got a fair few stacked up in the 'New Books to Read' pile, and it is not as though we don't have hundreds in the house and access to thousands in the library... and Easter is only a couple of months away.

Chocolate, cakes and biscuits don't usually figure in my 'Giving up for Lent' choices. I did give up biscuits once, and nearly managed it. I ate one biscuit by accident. I was chatting with a friend, and discovered the taste of biscuit in my mouth with no memory of having lifted it from the plate, conveyed it to my mouth, or crunched it up. The other I ate on purpose; 5-year-old daughter appeared with bag of biscuits she had made at school, so of course I ate one. What mother wouldn't have?

I shall be baking biscuits for the upcoming Womens' World Day of Prayer coffee morning which will happen at church on Saturday week. I say 'happen', because I am supposed to be 'organising' it, much against my will (and better judgement). One of the most unlikely things any 'spiritual' person discerned about me was that I my 'gift' was for organisation. Maybe he meant the person next to me?

We will serving traditional biscuits and cakes from Suriname; not as easy as I had hoped. The most popular cake is Bojo Cake, made with coconut and cassava. First catch your cassava - sounds like a long-legged antelope to me. So I found a recipe for...

Melt 100g butter
add 120g castor sugar (I use sugar which is stored in a jar with vanilla pods for baking, so no need for
vanilla extract
add an egg, mix well,
add 200g of custard power, or half and half custard powder and cornflour

mix well, and use spoons to dollop onto the baking trays. I made 16 biscuits the first time, but will make smaller ones the second time. Leave a gap, they spread a little.

decorate with "disco sprinkles" (this recipe came from a Dutch blog, translated by google). They look like hundreds and thousands in the picture on the blog. I've bought gluten-free ones for the next time I make them.

B ake for 25 mins according to the website; I'd check after 15. They are done when they are just beginning to brown round the edges.

They are very sweet, quite moreish, with a strange texture. They taste quite custardy... 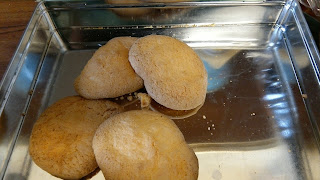 So that's my contribution sorted.