The days whirl past...

Last week was SATS week - four mornings of tests for year 6 pupils. Schools take them very seriously, as their position in the league tables depends on the pupils doing well. So, instead of being a test of the quality of the teaching taking place at the school, they have become a high-pressure focus on all the pupils getting at least "above-average" or even better. Well who would ever have guessed that somehow the burden would shift from "let's see how your pupils are doing" to "all of you eleven year-olds must bust your guts or.... the sky will fall in and the earth will come to an end".

Don't get me started.

The result was that my presence as a piano teacher was not required on four mornings. Excellent! I could have four mornings to recuperate, catch up on outstanding tasks, maybe relax....

Or I could go to the GP for routine stuff and a vaccination against pneumonia (Monday), attend a  staff training thingy (Tuesday) visit the dentist to decide what to do about a broken tooth (Wednesday) and... on the Thursday I ... did nothing.

(The broken tooth (it broke several weeks ago) turned out to be a chunk sheared off an old crown, and the expert advice/decision is to do nothing. Good-oh.)

On Wednesday we took part in a three-car shunt, courtesy of a Supermarket wagon using a narrow back lane ( unfortunately the same one that we were using) and coming round a blind corner towards us rather wide. We could choose a) hit the wagon, b) go into the sturdy hedge, c) STTOOOOOP.

We chose c), and so did the car behind us, successfully with room to spare, and so didn't the car behind her. Crump. We're ok - just an exchange of paint between our rear and her front bumper. She's not so lucky; her rear end is an inch or so closer to the steeering wheel than it was previously. Mr Shiny Brown Shoes has comprehensively remodeled his front end, and his driver's door protests making noises like an affronted chicken when forced to open or close. And the wagon? I don't suppose he even knows what he did.

We've had a week of lovely lovely sunny weather, with a cold wind. It seems odd to be wearing a thermal fleece over my cut-off trousers and tee shirts. Looks can be deceiving in May. I think these rock roses, which came out at the beginning of the week, 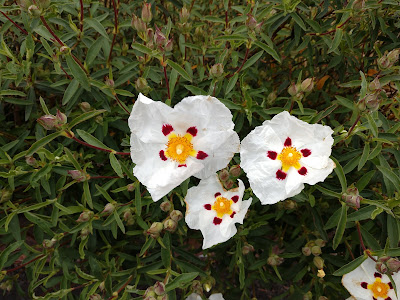 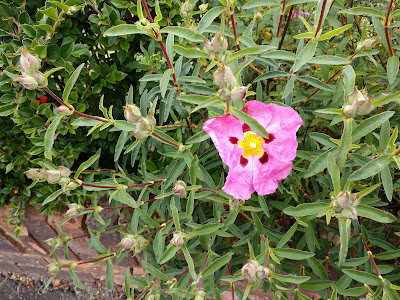 are some of the best things we've ever bought for the garden. I adore the fragile papery petals, and those vivid streaks of carmine. Especially the white ones.

I'm always taken by surprise when the paeony comes into flower. I think of it as a Summer, rather than Spring flower. We have one plant left, nestled among a mixture of aquilegia (aka columbine or "Granny's Bonnet" and goose grass; 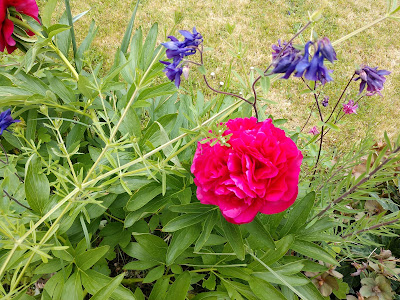 I've some more pictures of the garden, but they are on the other device, so that means another blog post.