I followed a red alfa romeo 147 down the bypass the other day. I had finished the "morning" school, and was proceeding to the "afternoon" school. "Proceeding" sounds like a good word - brisk, efficient, but not speeding (unlike a  close relative of mature years, not a member of this household, who has picked up two speeding tickets in one month and claims to have beaten his car with a stick, like John Cleese). I have to admit to some pangs - but in the end it was easier than I thought. It was travelling too slowly so I overtook it, and put it behind me. Literally and figuratively.

So far I have managed to remember all that needed to be remembered this week - music festival, changed teaching schedules, getting photocopies and so on ready in advance for lessons.... The most important thing now is to remember to do the entries for the music exams for a couple of pupils - the closing date is Friday, and I still have a question mark over two of them which is preventing me from getting on with the task.

I've been having a go at making kimchi - Korean fermented vegetables. Ever since I read


a couple of months (or was it weeks?) ago, I've become more interested in "fermented" foods. It appears that the midwife who insisted I eat plenty of live yoghurt shortly after I gave birth to the firstborn, and I was taking antibiotics for an infection (and that's enough information) was on to a Good Thing. Antibiotics kill off the Good Bacteria in your gut as well as the Bad Bacteria causing the infection. Well, I take antibiotics all the time, as one of the other potions I have been prescribed is to damp down my immune system. Apparently the stronger antibiotic I reach for if I suspect a chest infection is imminent is also known as "Domestos" becuase it "kills all known germs". In other words

The book is a good read, and debunks most of the foodie fads. But femented food (not booze, before you ask!) is a Thing to keep your gut healthy and encourage Good Bacteria (what about the Bad Bacteria? what happens to them?)

I tasted the kimchi - it is a quick version from the Good Food Guide, ready after a day and better after two weeks.

It looks Very Ominous, and smells - shall I say "potent"? Still, I didn't fall down in a faint after the little mouthful, which tasted "interesting" and even "not unpleasant" as well as "powerful". Possibly the substitution  of chipotle paste for the chilli paste, which I couldn't buy easily at the time, and cider vinegar for rice vinegar, will have made it less authentic and much hotter than it is meant to be. I'll just have to go to Wagamama and have kimchi there so see what theirs tastes like. 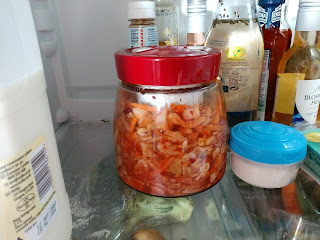 The little blue-lidded pot contains yesterday's home-made keffir cheese. This is a fermented milk, similar to yoghurt, but using a different sort of bacteria. I bought the starter from a health shop, followed the instructions and, hey presto - keffir. The stuff you can buy, ready-to-drink in bottles in the super market is expensive and tastes like a cross between yoghurt and buttermilk. My home-made brew hasn't pleased me as much.. However, the home-made keffir just keeps on going; just add a dollop of today's to more milk and leave it to its own business overnight. Then, filter it; 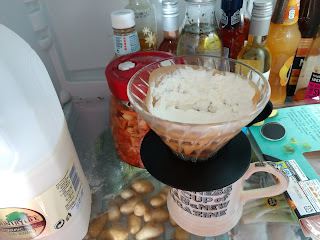 and all the sour whey drains away (couldn't resist, sorry, no, not sorry at all,) and delicious cream cheese can be scraped off the paper. Yesterday I had it mixed with salt and pepper and herbs, today with maple syrup. Tomorrow - who knows? I've still got some chipotle paste...

Finally, this is The Best Time of year to be visiting one of my schools. It is a Victorian school, cheek-by-jowl with the village church. The grass between the gravestones is left alone in Summer, because of these orchids. One of the teachers said "I've been told that they are very rare, but I never knew what they looked like." Sigh. I took this blurry picture of one right by the wall which separates the school path from the graveyard. Perhaps she never has time to look. 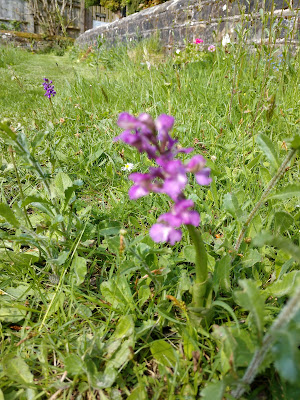 As the months go on, there will be hundreds of these flower spikes, mixed in with all different wild flowers. Mostly primroses at the moment, but some vetch and herb robert and ones I don't know the names of .
Posted by KirstenM at 16:00:00

Email ThisBlogThis!Share to TwitterShare to FacebookShare to Pinterest
Labels: cars, catching-up, flowers, random non-sequiters, recipe, sweet eats, too much to do