It is still very hot.

The young lettuce plants (on the right, the mauve flowers are self-seeded nemesia) are not going to make it; 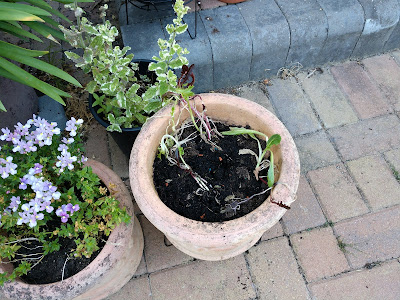 But I have been able to pick some peas, enough beans for a meal, and one pod of broad beans.

The cats flop about, going from one shaded spot to another, moving on when they have warmed that patch of floor or patio or carpet or cushion to find another cooler place. We have to groom them every day; the best brush for Leo is a very expensive Mason Pearson hair brush that the daughter left behind when she moved out. I don't think she will be wanting it back.

To make refreshing cold tea, put a couple of pinches of china tea into a bottle or jug with water and leave overnight in the fridge.

We are able to sit under the apple tree again. Phew - it is the coolest place in the the house or garden. There was a strange and unpleasant smell in that area of the garden last week, but all is well at the moment - I guess desiccated poo has no smell.

Outside is a good place to be dabbling with watercolour, as the washes dry out nice and quickly. Except when the washes dry out too quickly. Also the paper I am using is too chalky and thirsty - altogether a bit of a challenge. However, I'm pleased with this; 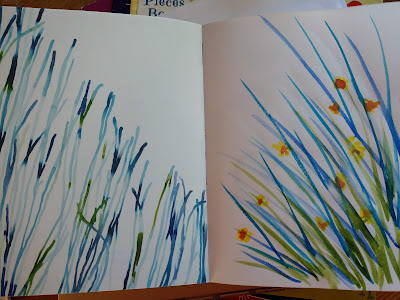 The left hand page was already printed in the book, the right hand page is my effort. And I'm very pleased with this; 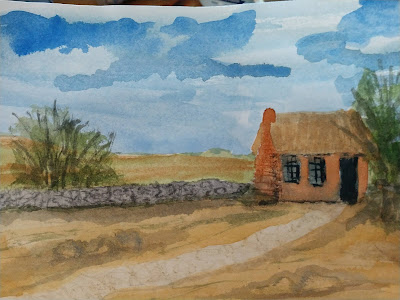 The cottage needs a bit more work (too late, everything is dry, but maybe I'll go over it with pencils or something - it doesn't matter) You get that effect of the stone wall by poking at the wet paint with the edge of an old credit card (I didn't have one) or the pointy other end of your brush (mine are all rounded) or - traditionally, - your fingernail - I have ten of those all to hand!

A new character invaded my novel without asking yesterday - he is called Ruthless Rupert because he is incredibly selfish - that's why his wife, Ruth, left him. He has arrived mid-scene, so now I need to know if he is going to stay, how he managed to inveigle his way into the story, and what his purpose is. My word, but he is a bit of a callous b*st*rd so-and-so. I may have to dispose of him somehow, but there again, he appears to have two young sons, so that does seem a bit drastic. But he is an appalling role model for the boys, so maybe that would be for the best? Perhaps he will just melt away in the heat.

The agapanthuseses are unwrapping themselves from their paper envelopes; that brownish creamish bit pointing left is the bud covering (I expect is has some botanical name) just about to fall to the ground as the flowers expand. 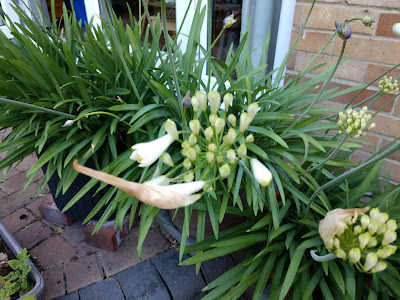 The white ones all come from some pots that I bought in Horsham market for Mummy's birthday someyears back - may even have been in 2003 - I remember having them all crammed into the car, in the footwell behind my seat and poking their long leaves and flowers through the gap between the front seats. I've potted them up once or twice, and will have to do the same again soon; last time there was almost no soil left in the pot, just a tight-packed mass of roots. 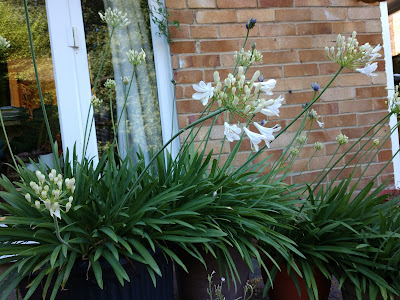 I've got some blue ones as well now, all from the parent's garden. These will flower next week; their buds are all still tightly wrapped up. 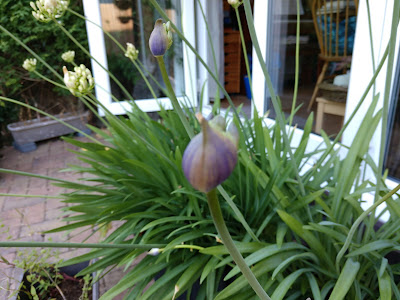 Here is another photograph from the series that BB took at Wakehurst Place the other day; 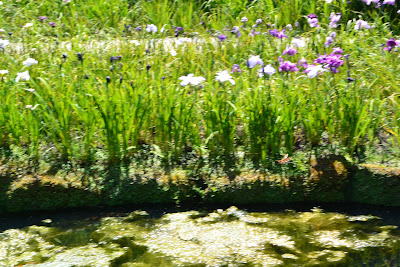 The object of the photograph can just be made out if you look at a point about three-quarters over to the right and one third up from the bottom. Here it is zoomed in; 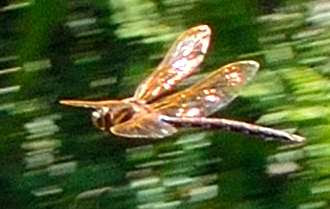 I'm doing a free on-line jazz piano course from www.futurelearn.com All was going swimmingly-ish, until the tutor set us the exercise of playing "Things ain't what they used to be" five times, using five-tenths chords and seven-tenths chords and improvising on the C- F- G- and American- Blues scales. I know what all these things mean, but my hands are too small to play tenth-chords. I shall find a way of fudging it. Some people on the course have recorded the left hand, using two hands to play the chords, and then recorded the tune and improvisations over the top. Is that ingenuity? or cheating? or fudging it? Who cares - it's supposed to be jazz, not Chopin.

I'm slowly, infinitely slowly, having a go at Chopin's Nocturne no 1. I heard it being played on Classic FM and thought "I should be able to manage that". But never as gracefully as Ashkenazy who was playing it on the radio.

The problem with both piano projects, the jazz and the Chopin, is that they are much easier if you have man-size paws, and they also need to be memorised to any hope of playing them with a sense of flow.

It's already very hot, even though it's only 9:45 am but I'm going to set to work before the sun gets round to shining into the piano end of the room and making everything even hotter.
Posted by KirstenM at 10:00:00