Friday 14th December - London, knitting, cooking, this and that

I've finished the scarf that I started back in April! I stopped knitting it over the Summer- being a tube, and colour knitting as well, it was too warm to have on my lap. I'm wearing it round my neck as I type instead of a hot-pack. I was very grateful for it this morning - it is the first time there has been ice on ponds and buckets of water, still there at lunchtime. 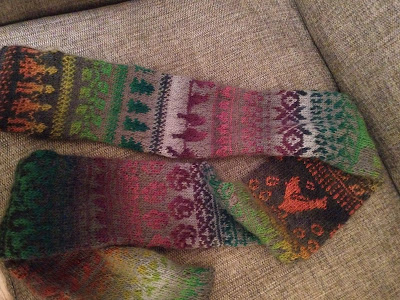 Some of the patterns worked better than others. On the whole the second half of the scarf has more of my favourites - the birds, Christmas trees and Scandinavian people. Although I have a fondness for the giant chickens and the purple Rennie-Mackintosh style roses as well.

I was given a couple of balls of King Cole Tinsel 'eyelash' yarn by my daughter, as a birthday present last month. 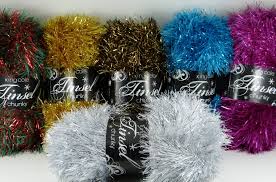 I asked the assistant in John Lewis about patterns; 'Oh, it is mainly used in knitting toys...' and she handed me a pattern book full of monkeys and squids and stuff...

cute, but a bit too much like hard work. However, this gave me an idea, so I bought the pattern 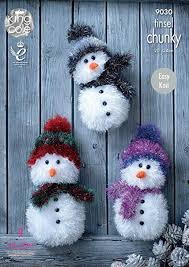 and I have been knitting away. And I'm not making snowmen.

Did I mention John Lewis? We went to London yesterday - how lovely to go up without an agenda or a timetable or appointments. He persuaded our Panda to ease into a highly improbably space - the last one left in the station car park -  and we caught a train at nearly 10 am - tickets costing about £70 less than we usually pay for hospital appointment travel.

The idea was to investigate a new set of plates and bowls as we have never been that fond of what we have had since we were married ('you must choose your dinner service and put is on the wedding list...') My, but we were hard to please then ('oh, I suppose this is the best we can do') and time hasn't changed us. Back then we chose this set, and still have plenty of it left.

(Poole Parkstone, in the 'oatmeal' colourway)

We've seen some Belleek that we like, advertised as for sale in House of Fraser and Debenhams but when we looked for it the assistant said 'it's only available on-line now, Madam. You can always send it back if you change your mind', which is not how we like to buy stuff.

The various white or cream china in Selfridges and Debenhams and John Lewis proudly proclaims itself to be 'hotel china', and looks the part. But we don't cook like Masterchefs, requiring oversized bowls with tiny little depressions for a spoonful of consomme 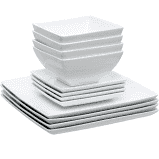 so we are continuing to smash our way through the Poole plates.

It was fun, though, riding on the top of a London bus (number 390 these days) along Oxford Street, and browsing through Selfridges again. We bought a few small Christmassy bits and pieces, nothing too heavy or bulky.

Today I did a bit of teaching in the morning, and settled to Christmas Cards in the afternoon, encouraged by some Christmassy bits and pieces, a tea-light, and a cup of tea. 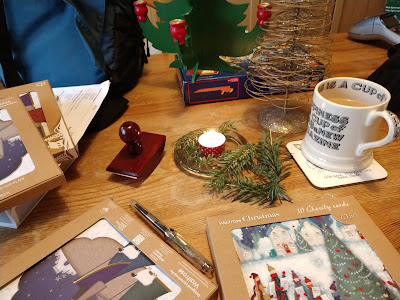