We actually went for a day out...

Oh, rather than me going on, look it up; google 'Watts Studio' or, 'Watts' Gallery' or 'Watts' Chapel' and you'll be able to find out all about it.

We had mixed feelings; it is All So Very Arts And Crafts, especially the Memorial Chapel, that we were a bit overwhelmed. Everything seemed to be in Capital Letters, if you know what I mean. Odd to think that this was exactly the era that my Grandmother grew up in - that transition between Victorian Art and Edwardian Socialism. I have an Arts and Crafts bedroom candlestick which used to belong to her.

On the whole I prefer the National Trust's Standen house, also Arts and Crafts but not so Conscious.

Anyway, I took my paintingy things along. We are going on holday later this year, and I'd love to be able to create a travel journal/sketchbook, but that's not going to happen unless I start getting my eye in now.

Lunch took forever to arrive - a combination of kitchen technology failure and a coach party of Dutch tourists was proabably the fatal combination. I amused myself copying part of the site map into my diary; 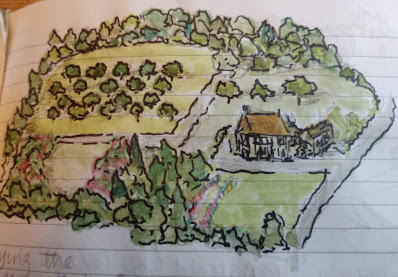 After we had walked round The Studio and The Chapel we had tea and cake. They serve it on mis-matched vintage china cups, saucers and plates; most attractive. The jugs tend to be less delicate, and as for the teapot - well, I couldn't bring myself to include it. A plain round white teapot with 'TEA' printed round the belly. 'TEA'. What else would one expect to find in a teapot? Apart from maybe a gold watch or a dormouse. But there wasn't much room for frivolity here. 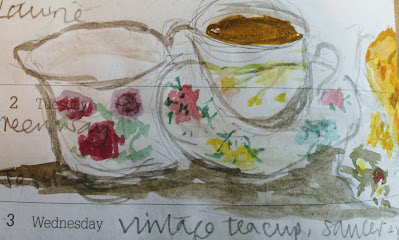 I had a go at copying a painting that caught my eye in the gallery; 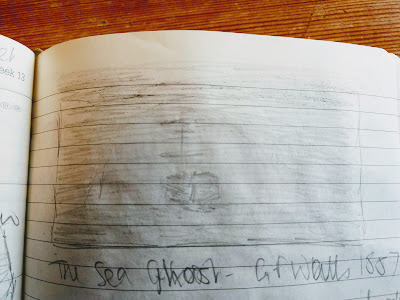 It was in shades of a pearly greenish bluish grey, and depicted a moment when they were sailing around near Venice in the fog. Maybe I liked it so much because there was no deep symbolism, wracking emotion, moral message...


Today is actually Sunday 14th April; I said the posts might be out of date order. I've finished the first crochet square, and also sewn a bag to keep the ball of wool and crochet hook and next-square-in-progress. I'm ridiculously proud of setting in the zip - as I sewed it all by hand it was much easier than roaring along with the sewing machine and then unpicking at all afterwards. 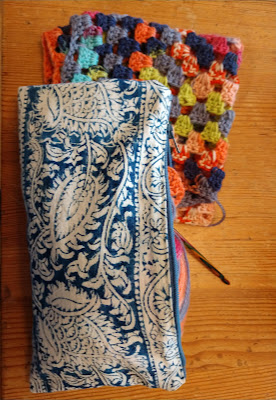