Sunday 19th May - NOT a Sabbath Rest

Having discovered yesterday evening that work is to begin on painting the hall-stairs-and-landing tomorrow, he had a busy busy day.

The two bookshelves on the landing were emptied and reduced to their component parts. I've advertised them round the church group as we don't intend to put them back. All the books are in the son's bedroom. The plan is to select the few, VERY FEW, books we wish to keep, and send all the others on their way. (Son and daughter, take note!) 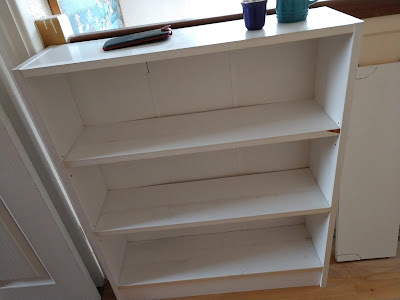 The top of one of the bookshelves is a bit damaged; this happened when Himself made a sudden and unexpected descent from the loft many years ago. We are eternally gratefully to that bookshelf for saving him from a headlong tumble over the banister and down the stairs.

We have a stack of cassettes to go - mostly nursery rhymes and Thomas the Tank Engine stories... speak now, or forever hold your peace.

All the house plants are sitting disconsolately on the patio outside in the rain. I'm hoping it doesn't freeze (although that would solve the aloe vera problem).

While clearing the hall I discovered a massive pile of those charity collection bags that get shoved through the letterbox several times a week (oh, to be living up a muddy lane rather than in a suburban street). One was clearly biodegradable. I thought I had taken a picture of the heap of confetti surrounding the couple of items waiting to go to some charity... but it's not there on my phone. 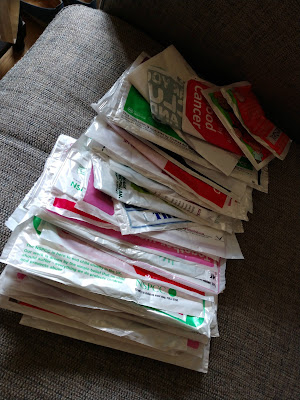 The hall is in a state that no-one has seen since it was last painted about twenty-five or more years ago. 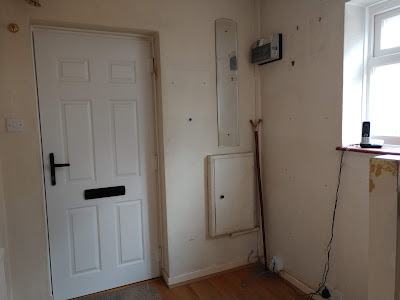 However the dining room table is worse than ever 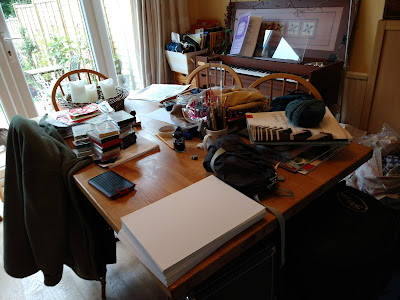 and the heaps have invaded half the floor space. 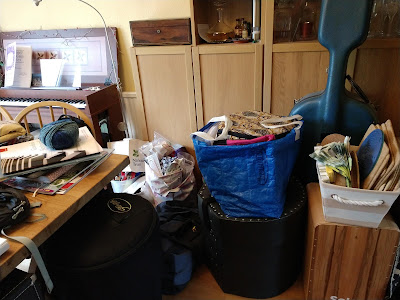 (A cello, a djembe, a saxophone and three bags for the samba drums. The place mats are sitting on a cajun)

It's all a bit overwhelming. And it's not as though I did most of the work - holding bits and pieces while hooks and pictures were taken down, carrying one or two boxes upstairs, was about the limit of my usefulness. We went out for lunch in order to buck ourselves up ready to finish the job. Right now I'm thinking that retiring to bed for a couple of weeks with books and boxes of chocolates might be a most desirable thing.