It's a crazy day. We are running about two hours early;

Woke up around 5am and had breakfast because neither of us were likely to go back to sleep.

Second breakfast at about 8.

I went off to church, played two of the four songs on the piano and was grateful not to be playing everything else (two hymns and all the music before the service, during communion and afterwards). The organ has something wrong with it; the organist of the day had it set up to play with some soft stops, but on certain notes it would unexpectedly couple to a more brilliant stop, producing a sudden blare of sound. 'Is the organ supposed to do that?' a churchwarden asked me in passing. 'Nope. Time to called the Organ Man.'

I suddenly lost patience with the way everyone chooses seats two rows back from the front row. My first thought was to remove the two front rows before the service began. My second (and, to my mind, even better thought) was to remove the two front rows during the first hymn. Heheheheh. In the end I made a solitary statement and sat by myself on the front row, handy for the piano later on. It felt very isolated, but I did have the advantage of hearing everyone else singing, which boosted my own efforts. 'Thank you,' said the vicar afterwards. 'I didn't feel so lonely.' He was all by himself in the other front row.

Driving too and from church was too interesting. We have a truly bonkers non-system of road closures everywhere 'to improve traffic flow'. Back to the drawing board, I say, and stay there until you have come up with something better!

My latest 'this will make you an artist' book has arrived. It is actually quite fascinating. In order to improve your observation skills, you copy intricate little diagrams. I'll put this all in a separate post, I think, as I'm already rabbiting on for ever.

While I was being holy, Himself was being practical, which, in my book, counts as being holy. He has restored all the coat hooks, and the red storage unit to the hall, and we are now trying to be Extremely Selective about what goes on them. 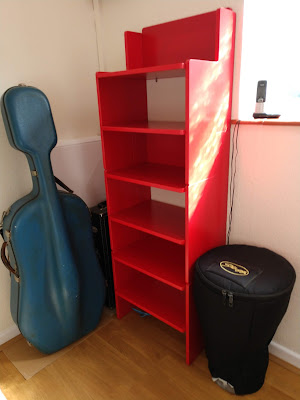 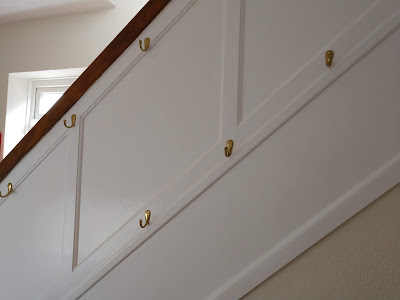 It's looking pretty good with Nothing on them...

We had lunch at about half past eleven.

He zipped out to Argos, the source of small thin (front-to-back) bookshelves to replace the elderly and dilapidated ones that stood on the landing. 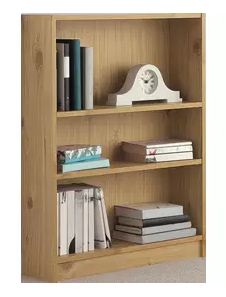 We stuck it without a bookshelf there for all the time the painting was in progress, saying how wonderful the extra width of the landing was. But we were also cursing the lack of somewhere to put things that were on their way up or down stairs. And, of course, there is the little matter of what to do with all the books...

I'm quite glad there was only one in stock when he got there. If he's feeling anything like I am, building two bookshelves would be one too many for current energy and ability levels.

My contribution to the home front was to water the garden, and get supper on the go. We are having BBQ ribs (ready meal) boiled potatoes (bottom of the fridge) and various veg from the garden, all somehow unified by the addition of fried tomatoes - sorry, that should read 'pan-fried' tomatoes. I've managed to pick some broad beans, fighting off the aphids, and some spinach - and found a couple of still crisp carrots in the fridge. 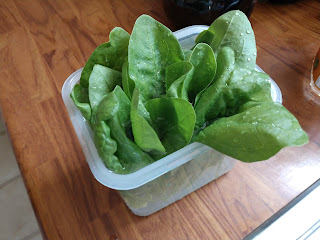 Broad beans are a bit of a swizz; all those pods for a handful of beans. But worth it, nothing like those horrible great grey pebbles we used to get served at school. 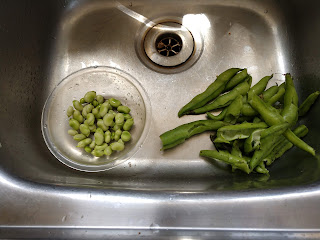 I zap the beans with a little water for 45 secs in the microwave, and then remove the outer skins to reveal emerald green pearls of deliciousness. The pods make a contribution to the compost.

It is now just gone 5pm, and we have enjoyed an early supper. The weird vegetable medley worked out ok; the tomatoes did their job effectively.

I've two emails to send out, to let people know that my Godmother is leaving hospital and returning to her bungalow on Monday afternoon. The hospital are arranging transport and home care support but it is not all over yet. The 'difficulty with swallowing' business started right back at the end of March, I think; she telephoned us for help at the beginning of April, it took six days to get a home visit, fourteen to get an endoscopy, seven more for the barium swallow, another seven for the followup appointment and eleven days in hospital to reach this point... still, let's see how the next few weeks go.

The wear and tear on her, and us, has been enormous, and the future is still an unknown quantity.

If our day is running early, it can only be a couple of hours until bedtime...
Posted by KirstenM at 17:19:00

Email ThisBlogThis!Share to TwitterShare to FacebookShare to Pinterest
Labels: gardening, My God-mother, too much to do, vegetables