How many litres in a bushel?

Well, I certainly didn't expect google to give me the answer to that so question so easily...

We picked up four tubs of rotten apples from under the apple tree and I reckon the tubs would have averaged at about 20 litres each. That's a fair number of apples, not including and stray wasps. About 8 wasps emerged one by one from a small hole in a medium-sized apple that I picked up, and swerved off in a drunken fashion to find somewhere else. The smell of cider-factory was something else.

It was hot, hot hot. We (daughter and I) were happy enough to be under the tree in the shade. Himself was wearing his Tilley hat to wrangle the brambles out of the new border, in the sun.

Son arrived home from walking about the town, and got roped in to dealing with the over-enthusiastic rose which threatens to engulf the compost bin every few months.

To cut a long story short, we got lots done, even watering. Those ice creams were well-deserved.

(I've also started planning for school - it gets to the point where I have to move from 'thinking about it' to 'getting it down on paper'. What shall I teach this boy? How shall I move her on to the next stage? Should I panic about whether they will be ready for music exams in November? and so on)

So, that was Saturday. It is now Sunday evening; Son has laid out a setup for the game of 'Settlers' which has caused Himself to pour himself a whisky and give me a glass of ginger wine. 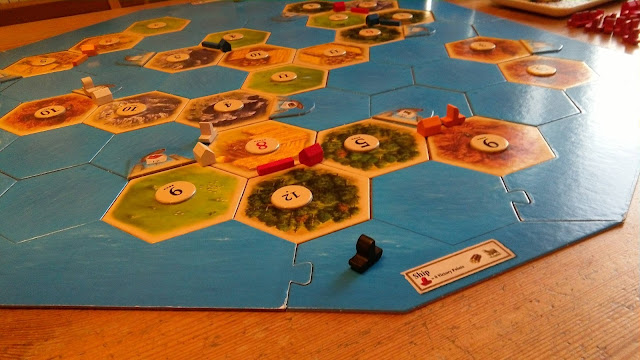 Himself and I had stayed at home all day. Doing nothing would have been a good choice, but somehow the garden beckoned...

I'm pleased to have sorted out various pots of plants that were in limbo; I've been growing ivy to use as ground cover, and there were a couple of tatty tubs of mint that needed sorting out; you know, this that and the other. Between us, husband and I got masses done while the Offsprings were at church for the dedication service for their friends' twin daughters.

Have I mentioned it was hot? If I hadn't seen McCavity slowly easing herself in among the plants of our new raised bed I would never have known she was there. Coolest place in the garden, I bet, until the sun came round a bit further. 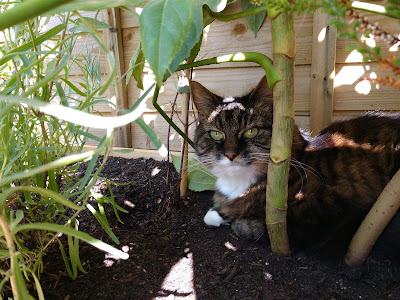 She would have been behind the chairs, close to the fence. I think this is the first time I have opened both patio doors this year. The green watering can acts as a useful door prop for the left hand door and I fetched a stool out for the other side. 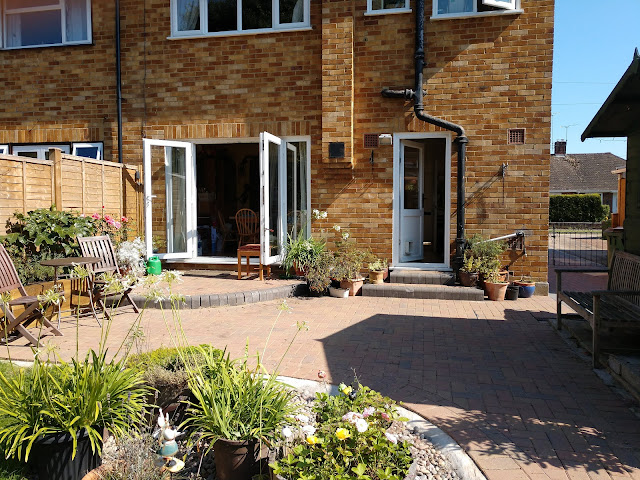 This is taken from the patio doors looking down the garden. I did a fair amount of sorting out of the veg patch (where the red tub is), and also that dark shady border beyond. 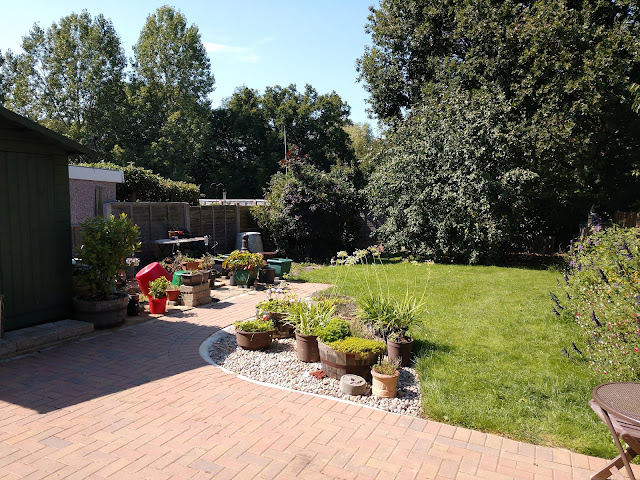 You can see the compost bin now that the bushes behind have been hacked back. The compost bin is the sort that should be positioned in the shade, and so it was, for many years, until we had the old shed and garage demolished. Sometimes, when I open the lid, I discover zillions of worms all trying to escape - they aren't quick enough though.

And that game of Settlers? Father and Son tended to compete, 'stealing' each other's cards, Daughter just tried collect sheep, and I won. C'est la vie. Although I'm sure trading cards for a cup of hot chocolate half way through wasn't part of the standard rules.