I tend to think of Saturday as the beginning of the teaching week, as well as the end of the teaching week. It is a sort of confused day, involving teaching 8 piano pupils at the Music Centre in the morning, and visiting my godmother in the afternoon, and zonking out in the evening.

Which is what I did today.

At the beginning of the week, on Monday, it felt as though I was living my life in a sort of grey-scale world. What on earth was going in? Then on Tuesday I suddenly put two and two together - hacking cough, red blood-shot eyes, wobbly legs, tiredness - time to take the antibiotics. What a difference! Colour has returned to my days again! Clearly I was brewing up for the usual back-to-school lurgy.

Another tell-tale symptom was that I had started leaving my possessions scattered over the county again... luckily, when I left my diary at a school on Tuesday afternoon, I was able to drop in on the way to another school on Wednesday and retrieve it without too much delay...

I did manage to fill the empty drawing page in my diary for last week; 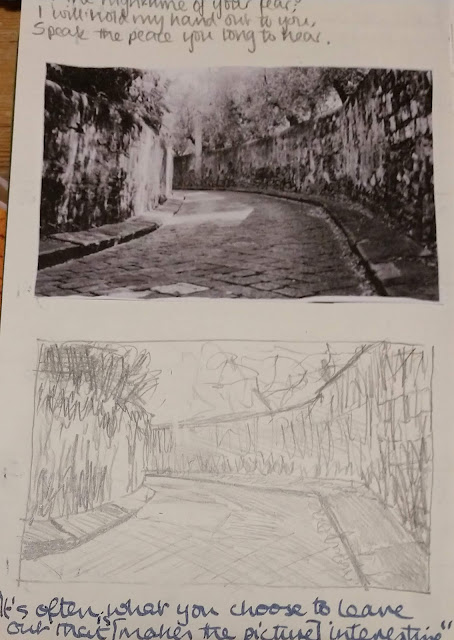 It's a deliberately sketchy sketch of the picture above, which is the last photograph in the book 'Steal Like an Artist' by Austin Kleon that I've just finished reading. I have taken my time over it - too easy, otherwise, to get through it all in one quick read, and there was quite a lot to think about on the way.

I've mis-quoted the final phrase, which directed my thinking about the sketch, but the sense is about right.

I've also read nearly all the Anne of Green Gables books again, staring from a quotation that someone referenced on twitter;

I forget why the someone mentioned the quotation; Anne Shirley makes the remark after a torrid day teaching in the local school. It seemed appropriate for the day, and I looked it up and got hooked . The final volume of the series, 'Rilla of Ingleside' is set in, and was probably written during the years of the First World War; it felt as though the war was being 'live-tweeted' all through the book.

This weekend's ridiculousness has been cutting out 48 Autumn leaves 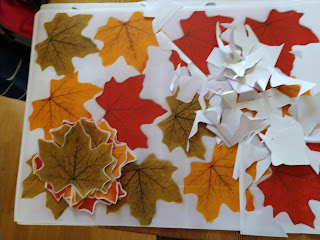 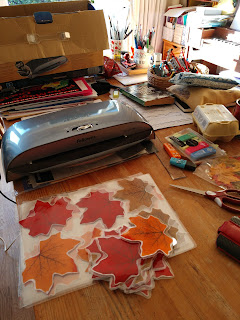 and then cutting them out of the laminated sheets 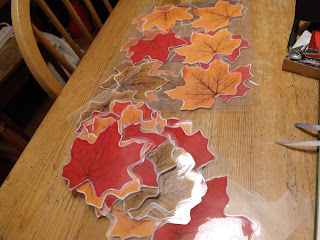 which is a job that goes on for far too long and eventually your hands and fingers get very tired of working the scissors. The plan is to create an attractive noticeboard outside the piano room in one of the schools, with each child having the chance to write their name and their favourite piece on a leaf, to be stuck on the board. It seemed such a good idea...

My godmother is bearing up well; ninety years old, still just about managing to cope on her own. I do a minimalist bit of housecleaning when I am there, and she gives us ice-cream or cake or rice pudding ordered from the meal-delivery company. There's usually something to sort out - a letter, a clock, batteries, whatever. Long may it last.

Tomorrow I may or may not make it to church - at the moment it's looking like a 'not' as he's bought croissants, and breakfast in bed is a distinct possibility.