It's that National Blog Promotion Month again, when one tries to post every day for a month. Except it started without me.

We went to see my godmother yesterday, bearing dettol wipes (to clean her bathroom - I do this on the sly every time we visit) and a stack of pots of delights; 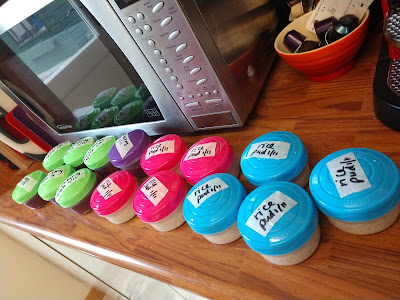 that's eight mini-pots of home-made rice pudding, and seven mini-pots of apple and blackberry puree. Himself had to go out to Tesco to buy more pots - how wonderful that they happened to be reduced in price! My godmother says she eats rice pudding twice a day.

Recipe;
In large microwave bowl, put 100g pudding rice, 50g sugar (I mix white and dark brown sugar - more brown than white for us, about half and half for her), 25g unsalted butter and 700ml milk.
Bring to the boil in the microwave - that takes more time than you think, but less time than you thought, so I suggest zapping for 3 mins and stirring and repeating until just before it boils over, or just after if you are unlucky). Then zap on simmer, With No Lid, for 30 to 40 mins, stirring after every 10 mins to stop it going lumpy and forming a skin. We don't like the skin.
This is much easier than in a saucepan, on the stove as it doesn't burn, and much easier than the oven as it doesn't stick to the side of the dish.

The 1st of November has been the first really, really autumnal day. Yesterday afternoon was dark and drizzly. There's one kind of tree, with leaves shaped like a maple but I think it may be a sycamore, which blazes out from all the others like a yellow firework. The other trees are mostly only just beginning to turn, so the contrast is quite stunning. I noticed them on the long drive through the miserable afternoon. 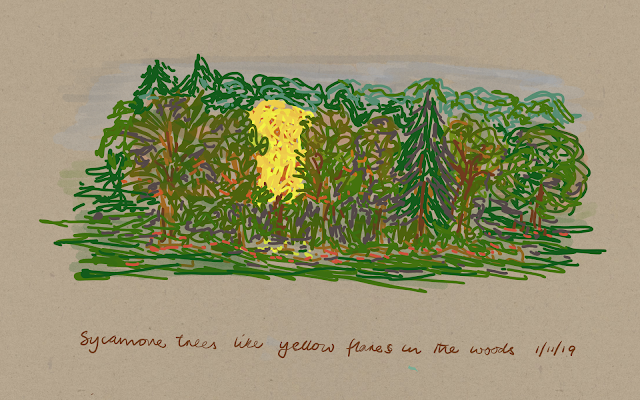 I've got the Bamboo Paper drawing and writing app on my tablet now; there's so much one can do... getting to grips with it will be a l o n g job but I prefer it to the other apps I have tried.
Posted by KirstenM at 10:55:00