I haven't done any 'proper' Remembrance Sunday things today. I remembered that I was feeling tired and a bit bleh and I haven't been sleeping too well recently (too much on my mind)

So I stayed in bed all morning, knitting Christmas Trees - this brings the total to fifteen, if I include the one that only has two triangles in its shape 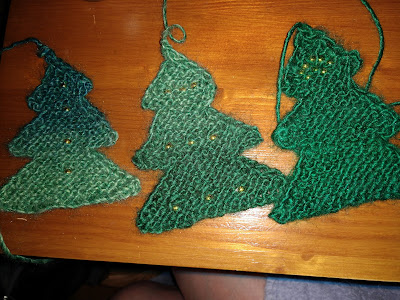 and doing some more to the current granny square 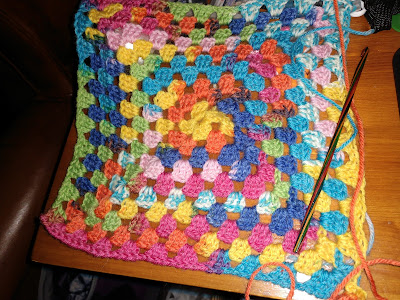 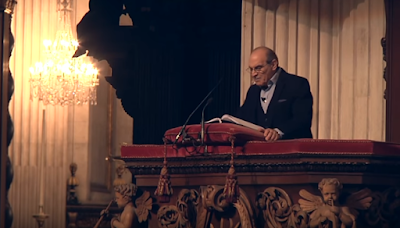 which I strongly recommend. It's on youtube - follow the link. St Mark is the current New Testament bit of Bible in the reading plan I am sort of following - the Old Testament book is Joshua, which I tried to read for Bible Book Club last month, and gave up in the end. Too, too, much blood and gore. Maybe if I hear David Suchet read it, I might cope with it? No, I don't think so.

A neighbour visited my godmother this morning and all's well. We had given her some bottles of liquid paracetamol as the effervescent and soluble tablets all taste pretty evil - and I had remembered to crack the seals on the bottles, but forgotten to remove the plastic inserts for use with the dosing syringe, so the liquid wouldn't pour out into the measuring cup. If we lived half an hour away - three-quarters of an hour, even, I could have sorted it myself. But and hour and a half each way - it is so difficult to do a good job of looking after her. I'm hoping that things will be set in motion this week to get proper care arranged, now she is admitting that this is what she needs.

Her stories of life during the second world war as a child in Finland are hugely different to the usual war histories that I am familiar with from my own parents. The Finns had a choice between being over-run by the Russians, or by the Germans - talk about a rock and a hard place. Somehow they managed to work out a way in which the Germans thought they had control, but the Jews and refugees were saved from persecution, and somehow they managed to stay as an independent nation after the war was over.