To my surprise, I managed to get to church this morning. At ten to nine I changed my mind from 'sit and knit' to 'get up and go' and arrived in verse three of the first hymn (and I was not the last!)

That made an excellent start to the day. Himself stayed at home. going through the last eighteen months of my Godmother's bank statements to identify all the payments. Intense work, prbably made a lot easier by me being out of the house.

We had an early lunch of dill herrings ( we had two jars at the back of our fridge, bought for my godmother, who at one stage appeared to be living on rice-krispies, swedish dill herrings, gluten-free crispbreads, potatatos, apple puree and rice pudding - but not all at the same time). She'd gone off the herrings, so I kept them for ourselves and we ate one jar of them today, with non-gluten-free crispbreads, home-made coleslaw and salad. And very good too.

How early? Half past eleven, because of trekking to the next town to collect this turkey that I ordered a couple of weeks ago, not knowing that Waitrose and M and S would have their shelves SOLID with turkeys yesterday. As it happened, this was one of the slickest 'collect-the-turkey' exercises ever, and we were home again within a remarkably short time.

I spent the afternoon stocktaking in the kitchen. All the housekeeping has ground to a halt since Easter, when life became so complicated and full of alarms. The cupboards and freezer drawers no longer had any semblance of order and method and had just succumbed to madness.

Suffice it to say that the worms in the compost bin have never had it so good, assuming they enjoy a bountiful feast of out-of date cans and jars, well-past-their-best-before baking good and vegetables, and stuff out of the freezer. I have a list of jars and cans and packets approaching their end of life to use up, all stacked in order on the shelves, and a shopping list of replacement goods. Yes, I KNOW custard powder lasts for ever, but even 'for ever' comes to an end sometime.

Well, it is half past seven, and we have done what we wanted to for today. I've cooked a batch of sausage supper 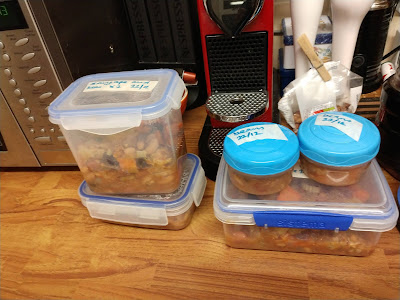 and will put the spare portions in the freezer, and also a tray of  mincemeat surprise from my friend Laurie's blog.  The scone mixture is flavoured with mixed spice and orange zest, which is why there is a bald orange sitting beside the remaining 'surprises'. 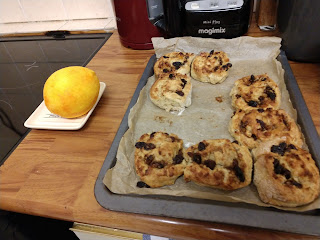 They should have been allowed to cool, and then iced and garnished with dried cranberries, but I'm not sure they are going to last that long.