Oh well, I was expecting it, but it still feels a bit - surreal.

I had a letter this morning from the hospital informing me that I'm in the 'at-risk' category of people, and should stay away from all contact (except my Nearest Dearest) for the next 12 weeks. I reckong thats round about mid-June.

We've sort of been acting as this were the case for a week or so now, but it has all become a bit more Real.

Nearest-Dearest has been getting increasingly twitchy about his foraging expeditions, for fear of bringing uinvited guests home. We shall be fine for the next four or five weeks anyway, and there are friends and neighbours, and hopefully on-line delivery opportunities once things settle down. He's lso old enough to be included in the 'you really out to stay home' category.

At the moment my father seems to be ok for supplies, which is just as well, as if possible we would prefer not to get too close. The sheltered flats where he lives are putting things in place to try and reduce the risks, and he still gets lunch every day - delivered to his flat, rather than all eating together in the dinig room.

We saw each other briefly yesterday, when we handed over a few bits and pieces of shopping that he had requested.

Meanwhile, life goes on as per the 'New Normal'. Maybe a little less knitting or crochet than yesterday, a little less gardening... At the beginning of the week I managed to extract a decent amount of earth from the base of the compost container, leaving it hollowed out. He's now stirred it all so that everything collapsed into the void, and there's room for more. It was perilously close to Full!

Some of my seeds have germinated; 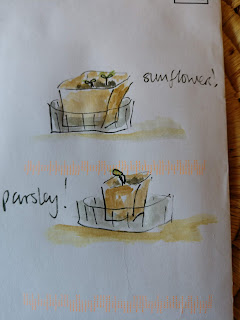 I saw on twitter that some streets in another town had put bears in their windows - teddy, not live - to create a 'bear hunt' for the familes who go out for along the streets. Good plan, I thought. I suspect ours might be the only bear-in-a-window for miles around at the moment - I wonder if it will become a 'thing' here? 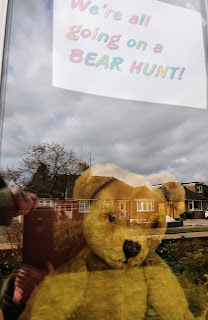 This is the bear I was given when I was about nine years old. It plays Brahms lullaby if you wind the winder, accompanied by a sort of grumbling noise which I think is the mechanism. My friend had a bear just like it, but with a growl instead of a music box. She swore to me that it used to talk to her at night, and I desperately wanted to believe her.

The other excitement was I taught my first on-line piano lesson this afternoon. I contacted a family that I thought would be happy to be 'guinea pigs' for the experiment, and it went more or less ok - sound quality is rough, but good enough to teach a half-way decent lesson.