That was a question posed on twitter (humouroursly, I hasten to add) this morning.

Although today has already had its moments. We both felt a bit 'hustled through a hedge backwards' by the end of the morning;

The catflap has been playing up for a couple of days. New battery time? No, that didn't sort it. The latch was operating at random intervals regardless of whether there was a cat anywhere near.

Himself spent a gruelling half hour changing batteries, doing factory resets and generally fiddling about with the contraption - uncomfortable work when you are crouched down at cat-flap level. Then we both spent a hectic time trying to re-programme the catflap. The cats are microchipped, and it is this that unlocks the door. So we have to catch a cat (easy, the frst time, just nab it while it is asleep) and then feed it through the flap several times in each direction to register the chip. This gets trickier as you go on. At least He had removed the contraption from the back door so we could contain the cats in the sitting room and work in the warm.

This process proved unsatisfactory. Well, to be blunt, it didn't work - replacement catflap time. Luckily the nearest pet shop had something that would do the job in stock. so He nipped out and returned in triumph.

'Right', he said, a short while later, 'just grap a cat and we'll get this sorted.'

Yeah, well, I'd just started a pre-scheduled zoom session. The first participant was greeted to the sound of extrememly cross cat and both of us making 'persuasive noises' of the 'oh just go through you stupid animal' type. Then, with one hand on the screen and another on the cat the phone went, because the other participant had lost the email with the password for access...

Oh well, we got it done - everything - catflap now installed, zoom call accomplished and password re-emailed.

First thing this morning, when I was still at the breakfast-in-bed stage, and all these excitements where yet to arrive, I watched this tutorial

and thought - 'that looks easy enough' 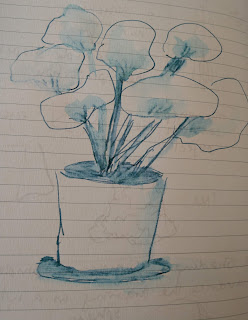 I drew that while I was waiting for Himself to pause from fixing the new catflap and work out why my connection to the zoom meeting had dropped, and how to restore it.

Later this afternoon, I added to my collection of learing to draw figures 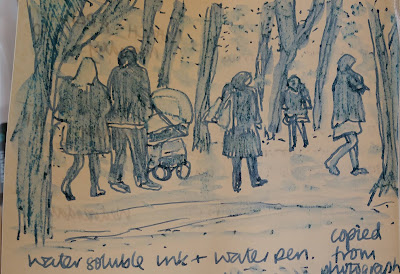 and I'm pretty chuffed with this too. Especially as several art teachers at several schools informed my that I was no good at 'art', and I believed them. I rather think this comes into the same bracket as telling people that they are 'no good at music'. Sure, some people are 'naturals', 'pre-wired' to be able to do it. Like some people (most, actually) can sing in tune, just like that.

Drawing, for me has just been a case of learning how to do it, and then being accepting of the results.

Like cooking. Read the recipe and do what it says? Learn enough technique to be able to get along?

I'm 'cooking' supper tonight - baked beans on toast, reasonably within my current capabilities. I've also put the last egg to good use - it was a bit too elderly for me to want to eat it boiled or fried, but baked in a cake for an hour and a quarter should render it harmless enough. 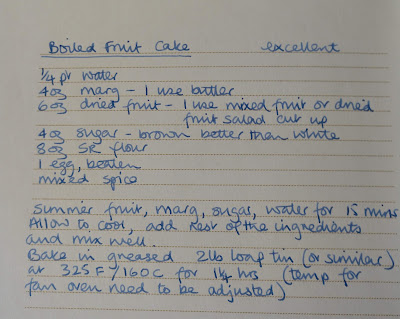