Friday - Saturday - Sunday - Monday - Tuesday -Something happens each day, to be sure, but I have to go back through calendars and journals and diaries to extract the details...

This is turning out to be one of the best memory joggers; along with photographs on my phone.

The piano keyboard is Wednesday of last week, when I signed up for an on-line piano course on practising techniques. It a 'how to practise' rather than 'how to learn these technical skills' and I'm finding it very inspiring;  the course, and also starting piano teaching again after a break, has got me playing much more than I ever did over the last couple of years. But I might have written this in the last post.

On Thursday as we looked out of the kitchen door we saw a very bright star in the sky directly over our garden gate.

'Star light, star bright, first star I see tonight,
wish I may, wish I might, have the wish I wish tonight'

is a song I have been teaching for around 10 years... a simple, rocking tune using just two notes.

I was having a zoom chat on Friday morning with a friend when an ENORMOUS parcel arrived - we looked at eachother in blank amazement, wondering who had ordered what without saying anything to eachother?

It was addressed to me -  and came from Canada, and inside was this;

There's a hardware store there called Lee Valley follow the link and get lost in a world of wonder for several hours. We've bought 'essential must-buys' from there every time we visited. Search on 'music' and you will see what our friends started with - and with skill, persistence and determinations turning into this beautiful glockenspiel! If you want to play the starlight song, pick G and E and play

The rest of Friday and most of Saturday were screeds of emails, letters, telephone calls, catching up with friends, completing the last pieces of unfinished business from being furlouhed by one employer, and setting up the schedule for on-line zoom piano lessons starting on 22nd April.

Sunday was 'zoom church' -  an oddly moving and chaotic time of songs and Bible readings and sermon and prayers; one person is the Controller, from his study, another person 'assissted' by her ten-year-old son does the powerpoit screens, the Bible readings, prayers and songs all came from different households and our vicar gave the sermon from his house in Kent because he hasn't been able to move here yet. It was well 'attended', many still finishing their breakfast, drinking coffee (me) colouring, doing crochet (me - I was delighted as I got four rows done!) The square for Sunday is a merging of the colours of the blanket I am making as a wedding present for some friends. The deadline was august - now - who knows...

Monday is when I did gardening, and we also discovered that our drains were blocked - again. Himslef and two neighbours and a set of rods managed to clear it, just in time for the water authority man to turn up and say - 'it looks fine now'. He did check it with a camera, and disinfect everywhere so his time wasn't totally wasted.

I made a tiny sketch on the bottom of a post card I sent to my father. I also took pictures in the garden; the lilac is in flower, the apple blossom is wonderful, the camelia has two more buds 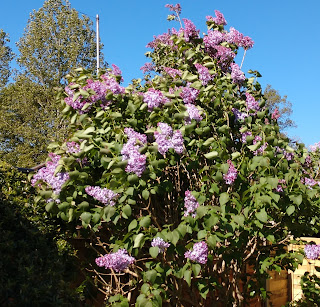 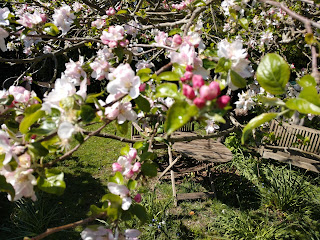 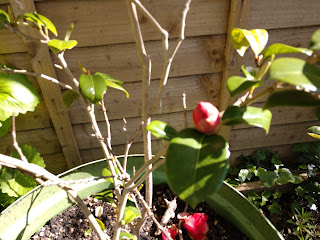 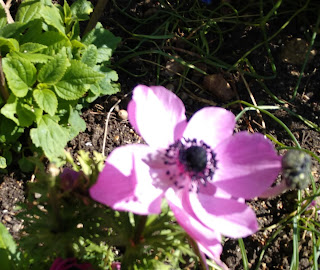 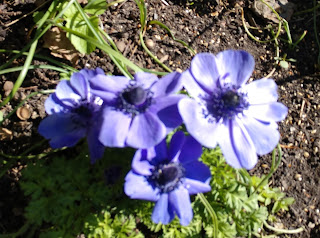 and Leo has a new favourite spot, balanced on a wooden beam and leaning against the fence after the sun has warmed the surfaces for an hour or so. 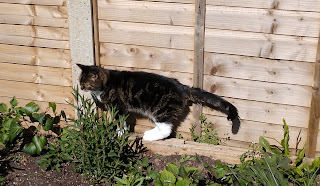 I did a tiny watercolour of the anenomes for another postcard Today I've had a zoom chat with friends, and then we went out for a little 'tour' - dropping books off for my father, who islooking very well, I might add, and collecting some plants from a friend who is handing out 'extras'. I've two courgettes to plant up, and four hollyhocks which she has to 'weed' out of her borders.

Tomorrow I have to try and be a piano teacher again - so far I will have two pupils on Wednesday, five on Thursday and four on Friday, I reckon three - five pupils on Wednesdays, Thursdays and Fridays shouldn't interefere too much with my 'retirement'!