Saturday 30th May - Five months through the year

Do you remember all those jokes back in December 2019 about the New Year being 2020, and having  twenty-twenty vision, and everything would get better? Well, who knew?

Lots of people, come to think of it, but the hard decisions proved too hard to take at the time when they needed to have been taken, so here we are. World beaters in terms of infection rates, deaths and general stupidities.

We - Himself and I, are lucky though; our circumstances are such that we've not had financial worries, and we've managed to sort out getting food delivered, and pet food, and even garden supplies. People are amazingly kind and considerate. We've been able to see my father from time to time; earlier this week we even took round some garden chairs and sat round on a grassy patch outside his block of flats for a chat, instead of standing around in the car park. He's looking well, maybe a bit bored, but is managing.

I've had many a happy hour or so while the weather has been so glorious through April and May. I've so enjoyed having time to notice the plants growing and the flowers coming out in due season. At the moment the gardens everywhere are full of roses in bloom, azaleas, peonies and rhododendrons - in our own garden and in the other gardens up and down the road. 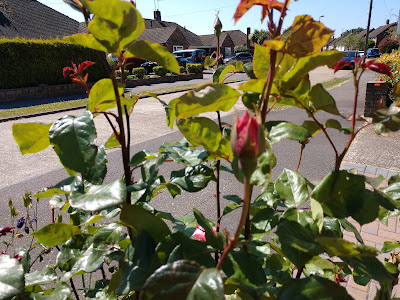 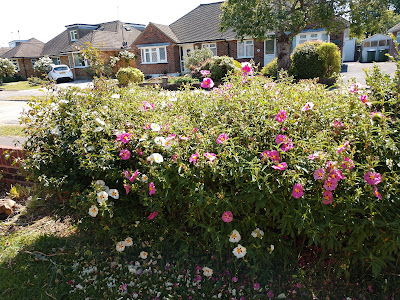 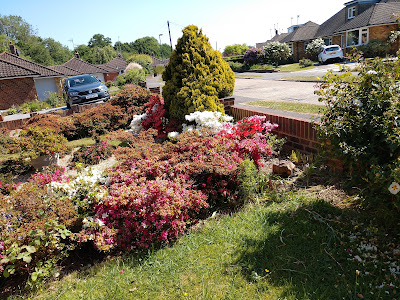 Zoom teaching - five weeks now, and another seven until the end of the Summer term - has been a mixed experience. However most lessons go fairly smoothly now, and I have hugely enjoyed being able to teach as though I had two pianos side by side, one for the stident and one for me. Indeed, I spent an hour or so working out how to rearrange the dining room so that I could use the electric harpsichord on the fortepiano setting to replicate the setup from September when, maybe, face-to-face teaching might possibly start. It would solve any issue of social distancing, for a start. 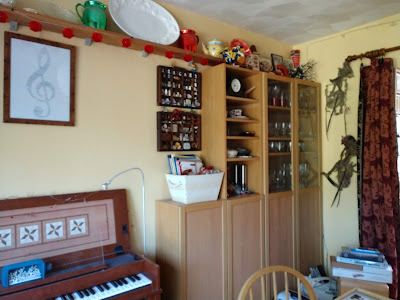 and swap them with the piano and the shelves full of music. 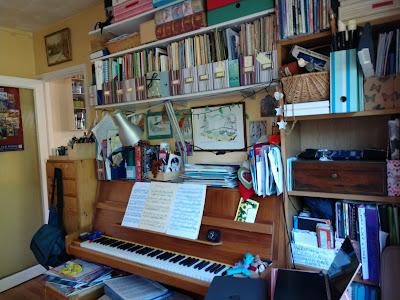 It would also create a little more space around the dining room table, perhaps. Himself considered it in a profound silence for a full minute and then vetoed the whole idea. I can't say I was surprised. It would be a mammoth task. Although, what else might we be doing for the next couple of months? I'm supposed to be staying home until the end of July.

I wonder how much of the music I might be prepared to part with. Last time I went through all the folders I removed about six of the several hundred music books.

Unfortunately this is not the kind of task I can do on the sly when he isn't around, like the time thirty years ago when I painted our bedroom because I couldn't bear the awful faded floral wallpaper. He was away on a business trip, so I just bought the paint, and painted all the bits of wallpaper that I could see. Number One son, then aged about three, was perfectly happy as I gave him my radio cassette player to keep him occupied. Although it was never quite the same, and luckily it turned out that the hinged door for the cassette access wasn't crucial for functionality.

I did get caught out when we rearranged the room several years later... 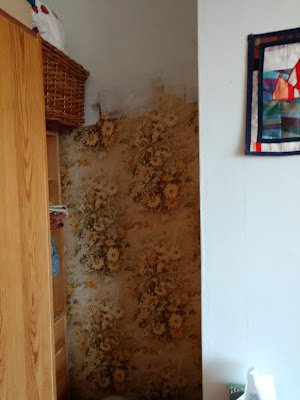 No, this time even I can see that moving all the furniture would be beyond me, and anyway, now he is retired and we are both Staying Home, he is always around. It would take me a lot longer than the time it takes him to nip round to the post box to post a letter, which is pretty much as far as we go these days.