Where have I been these past ten days?

My zoom piano teaching schedule is now at capacity; 18 students a week over three days since I last posted. It makes Wednesday, Thursday and Friday very intense, and Saturday and Sunday a bit of a blur. Monday and Tuesday I raise my head and see what's going on, and then 'how did that happen?' it's Wednesday again!

But, as I thought, after a couple of weeks I have managed to create a system that roughly works  for keeping my lesson notes together, the music together, and the admin running along parallel. The bit I hate is checking my bank account to see if the payment has come through... have they forgotten to pay? Or is it just a banking processing delay over the weekend... I'll remind them next lesson that the last lesson's payment hasn't appeared...

I have rewarded myself by spending nearly all my earnings on a loverly superduper ridiculously extravagant large red leather folio to hold notebooks to record everything in. It was so expensive that having my initial gold-blocked in the corner hardly seemed to add to the cost. They did throw in a little tin of leather polish and polishing cloth, all in a little bag, for free. It makes the admin a little less admin-ish.

Strange things happen in zoom lessons. The child suddenly disappears from view, and reappears brandishing a pupppy at the screen. Or her younger brother.  Put the puppy/brother away, dear, and show me how you should sit at the piano, no, not crosslegged...

My fiend's daughter works in a kindergarten, and zooms lessons to the three and four year-olds. children. She says they spend a good deal of the lesson shouting 'David! David! David's Mummy, are you there, we can't see David on the screen anymore, we don' know what he is doing'. Or 'Sarah's Mummy, Sarah's Mummy, Sarah is jumping up and down on the table...'  I don't know why the parents think that the teachers can do crowd control from the screen. Once this lockdown ends and they go back to the school, she and her coleagues should really spend the first few weeks training the children to react like well-trained dogs to whistles and commands, like those amazing dog trainers on television.

I would be almost unable to remember anything much about last month if I hadn't kept a diary, taken photographs from time to time, and done all the daily thumbnail sketches. 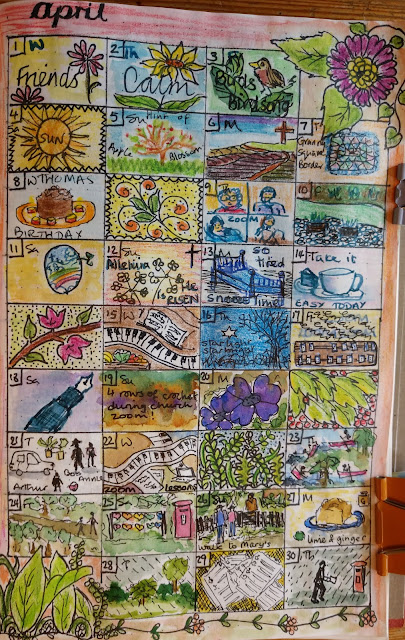 It was a Johanna Basford post that gave me the idea; she suggested you pick out one word, which I did for the first few days, but after that I mostly just sketched a picture. They are only the size of a large letter stamp - just enough to trigger a memory of the day.

I've set up a page for May, and already I am two days behind. Sunday was quite a dull sort of day - I spent most of it creating this page and trying not to wander round whining 'I'm bored'. 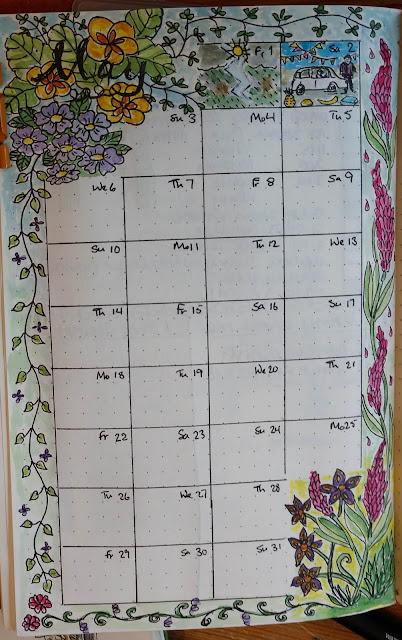 I did make a cake with leftover fresh pineapple. Himself ate the last of it today. I've discovered that a two-egg sponge recipe fits nicely into the little panikin that you can use in our air-fryer. It is a great thing for cooking cake - heats up in less than five minutes, and switches off once it has finished cooking.

Monday - pottered about in the morning - what did I do? No idea.

I did discover a new composer; I was reading in bed when this extraordinary music came on. It is composed by Kaija Saariaho, and was one of the movements, called 'Moss' from 'Six Japanese Gardens'. I think I will order the CD if there is one.

And now it is today, Tuesday. We have worked out that this shrub 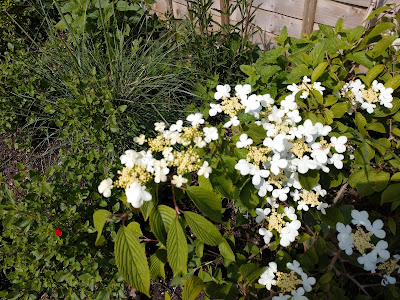 that burst into flower a week ago is a Virburnum, 'Japanese Snowball'. It is very pretty, glowing in the rain or the sun near the bottom of the border. This border is the setting for a series of surprises; James the gardener didn't get round to telling us everything that he planted when he dug out and replanted the whole length last Summer, or what it would do, or when it would do it. We just have to go and look and see what is happening. That tiny red dot to the left of the shrub is the first of the Salvias, 'Hot-lips' coming out - I had no idea that they would start flowering so early. 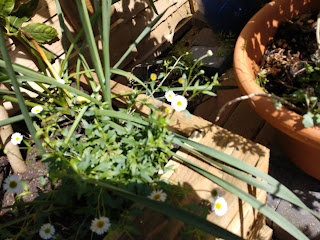 You can just make out the little daisies in the corner of this bed; we bought two pots from the National Trust property Standen one hot Summer's day last year, and planted them in the raised bed where we tend to have coffee in the morning once it is warm enough (not today, for sure). They are everywhere in Cornwall - a weed, I expect - but we love them because they remind us of all the times we were down there when the children were small.

I want to buy lots of pink and white fancy tulips this autumn and plant them everywhere. And blue cornflowers. And irises. I've seen them everywhere on a short walk to the post box on, let me just check the thumbnail pictures, the 26th April.