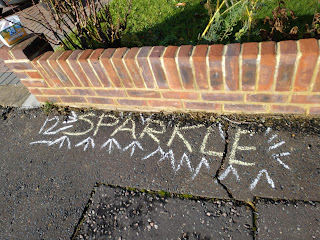 It was a sparkling morning, and I reached breaking point with the un-sparkly appearance of the bedroom windows (I had a project back in - September, I think it was - to clean all the windows. I managed them all except for the bay windows upstairs and downstairs, and the window in the hall).

So today I made two of the five bays in the bedroom window sparkle - I had just about finished, and, to be honest was just about finished off, by this effort when a phone call came for me and I had to clamber down the rickety folding step-stool (the one we 'borrowed' from my parents ten years ago having decided that it was too rickety for their safety and our peace of mind).

Himself dealt with the couple of streaky bits I had left which was much appreciated.

Wobbling at full stretch, balanced on the same step-stool that I remember from my childhood had left my legs feeling as though I had done an hour at the gym.

I fully expect son or daughter to 'borrow' the step-stool in a year or so... That will be fine so long as they replace it with something equally convenient, as we did for my parents.