I watched the dawn again - quite easy, as it is still dark at 7 am, and we are tending to wake at about 6 which is not our preferred hour. The world outside my bedroom window is actually much more colourful before the day begins; 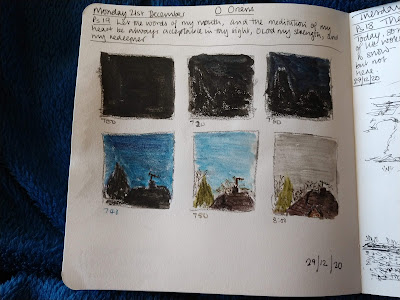 Once dawn had become day the sky was a uniform grey, the roof tops brownish grey, and the tree opposite a greenish brownish grey, not as bright as the picture.

Some lucky people woke up to snow - someone tweeted a picture of their garden with the caption 'Narnia', looking something like this; 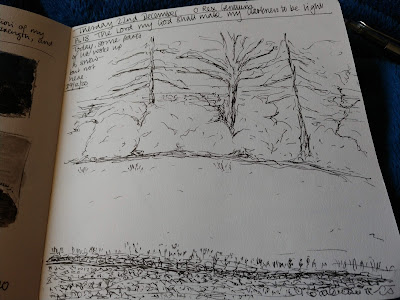 According the to weather report at lunchtime there is a slight chance we may get snow for New Year's Day. I'm not getting my hopes up...

I never did finish posting all those pictures of weird and wonderful teas from my Advent calendar. I have now tried nearly all of them, except coconut and chocolate tea which went straight to the worms in the compost bin. I even drank the beetroot tea - a pretty pale pink, and tasting mostly of orange. I have reverted to English Breakfast.

It's a bit annoying that the Twinings tea bags, of which we appear to have several hundred, can't go straight into the compost after use. Last year's compost is full of skeletal vestigial teabags, ghosts of tea-times past. Now I carefully tear open the bags and tip the leaves into the teapot and chuck the bag into the bin. As soon as I have drunk another 100 cups of tea I shall change brands. Or just stick with loose tea - even tea-bag tea tastes better when released from the little bag.

A pot of tea is a statement of love and warmth and comfort, in a way that a mug of tea isn't. 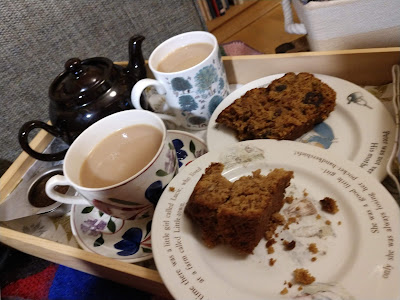 It' around 4pm and I have just brought in the tea-tray; mine is in the cup and saucer - a proper breakfast cup and saucer, the last survivor of the 'Polruan Breakfast Set' used by my father's family when he was little, and used by our family when I was little. It was made by T G Green in Church Gresley, Cornwall; they are more famous for the blue and white striped china which you can still get today.
I weighed myself this morning; it could have been a lot worse. My calorie control system seems to be working; in order to avoid gaining the kilos (I used to read the scales in stones and pounds, but the numbers for kilos are bigger and easier to read) I simply ensure that Himself eats half as much again, or more than half, than I do. Hence the little and large slices of cake. This is another whiskified wonder; the fumes as I open the tin are still strong enough to make me take a step back, and could explain why my slice is more of a ragged chunk.
If dawn came at 8am, dusk has fallen at half past four or thereabouts. We staggered round the block at about half past two - 880m this time - I was staggering because it was slightly uphill apart from the home stretch, and he was staggering because it is hard for hi to walk so slowly with his long legs. That's three days in a row...