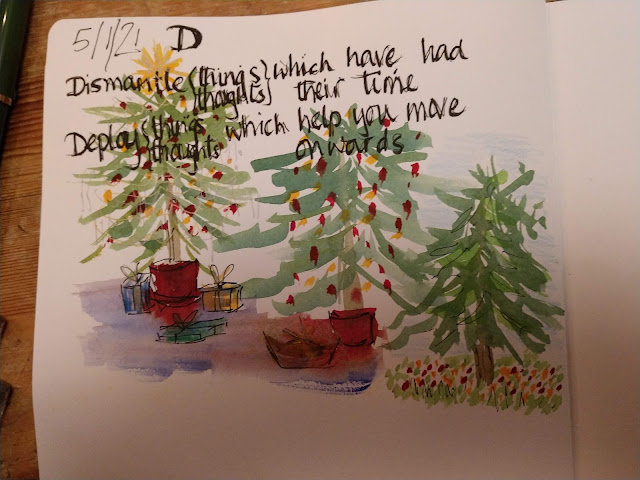 D - dismantle the tings/thoughts that have had their day, and deploy the thoughts/things that will help you journey onwards.

Not that I have journeyed further than the settee today. We were promised snow! Or, less welcome, but more likely, sleet. Instead we had Grey, cold and uninviting. It seemed to be already dusk by half past three.

'Half past three. Have-a-cup-of-tea!' That's a djembe rhythm I have been teaching to primary school children since I learned it myself twelve or more years ago. And that's exactly what I did, have a cup or two, of tea. 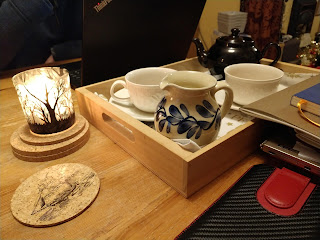 Tea tastes better from a cup in my opinion. These were at the bottom of a cupboard; I bought them in October 2015 from a charity shop - how do I know? It was my parent's 60th wedding 60th anniversary that month, and my mother stipulated that the table decorations should be small sprigs of flowers and greenery stuck in wodges of oasis stuck in white teacups and saucers... Ten cups and saucers took some searching out, but the end result looked very pretty and I have been using them for this purpose ever since, although nowadays I buy small pots of bedding plants (primulas, usually) and just plonk the pot into the cup. I wrap the pot in a but of tissue first if I feel so inclined.

I've also been disposing of the candle ends by BURNING them - I do like a bit of flame and fire. 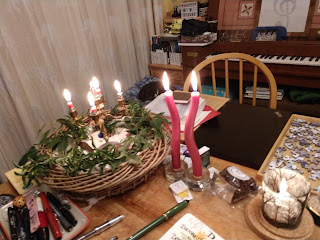 The red candles are meant to be wonky, I should add. I've had them for years and years, discovered them at the back of a cupboard this Christmas. (The one with the white teacups). They were twice that height to start with (the candles, not the tea cups); slow burning, and they don't seem to drip either.

We have taken down the tree and most of the Christmas cards. Tomorrow we will take down the rest of the card and the lights around the sitting room, but we are leaving the ones in the window until - Epiphany?, no, that's tomorrow. Candlemas - 2nd Feb? Maybe. Easter? Now you are talking. An act of defiance against the dark...

We didn't go for a walk - grey weather, and a couple of glasses of wine at lunchtime removed all inclination for exercise. Tomorrow is another day.