Monday 10th May - Another week

I have cast a clout - again. I did try casting a clout a while back - was it days? weeks? who can remember anything longer than three hours ago anymore?

Anyway, that clout casting was premature, and up until today I have gone back to three layers, two of them thermal. Today I ditched the non-thermal layer, and right now I am wearing just a thermal vest and a sweatshirt. Although I have a crochet blanket close by to swaddle myself in as the evening progresses.

We had a tea-party in the garden on Friday afternoon

for various family members. It was sunny, but briskly cold. I should have wrapped up in a blanket that day, I had put them all ready, but didn't. Too much getting up and down to refill the teapot. Somehow the conversation got round to 'what can you buy my brother for Christmas' - apparently the most successful present in recent years was sticky tape with a zip pattern printed along it - I shall be searching for such a thing. He is a fan of gadgets, so I brought out the egg-opening device we were given as a silver wedding anniversary present; 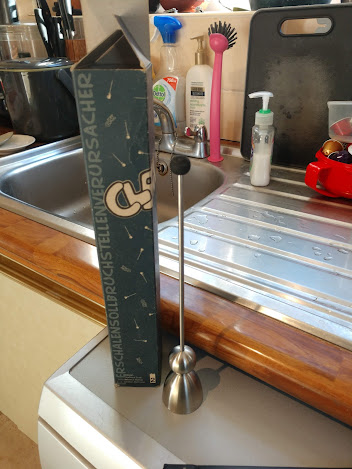 It is an Eierschalensollbruchstellenverursacher, or 'clack' for short. 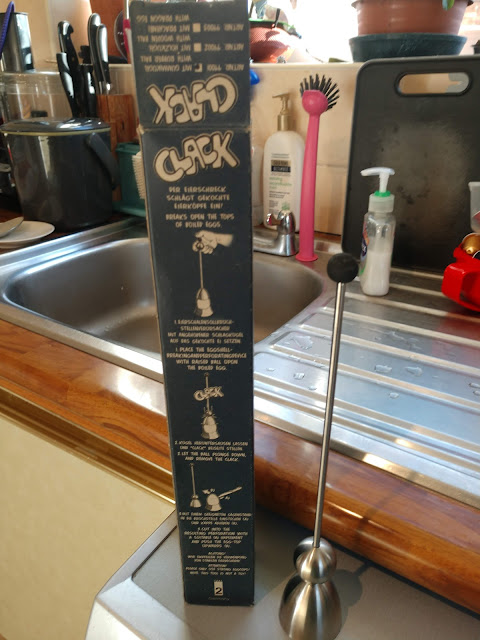 The instructions are pretty clear; boil the egg, put it in an egg cup. Put the dome of the Eierthingywhatsit on top, raise the metal ball, and let it drop onto the top of the dome. 'Warning', it says in the instructions. 'please use a strong egg cup'.

The bevelled edge of the dome cracks the egg in a need circle which you can prize off with a knife.

I brought it out, and my father insisted I go an boil an egg. Why not - it only takes a couple of minutes, after all. The egg was boiled, the Eierschnappenburstenkontraption did its stuff and made a perfect inscision, surgically precise. Now what - my father had no intention of eating the egg, but luckily it was just what my sister in law fancied eating before setting off on the long drive home. Which brought this passage from 'Emma' (Jane Austen) to mind;

An egg boiled very soft is not unwholesome. Serle understands boiling an egg better than any body. I would not recommend an egg boiled by any body else; but you need not be afraid, they are very small, you see--one of our small eggs will not hurt you.

It is a long time since I have had a boiled egg for my tea... this was placed into a pan of warm water, brought to the boil and given exactly three minutes; perfect. My godfather was the last person I saw eat a boiled egg, he wanted his 'very soft'. Ah, said my Aunt, in Dutch 'enn snot ei, ja'. It's pretty close to English - so no need to translate, I think. Three minutes is a bit firmer.

I've been making a point of wandering around the garden nearly every day, rain, wind or shine, for a couple of minutes at least. Sometimes I get involved in repotting seedlings, or a skirmish with the goose grass - you think you've got it beat and then, 'it's behind you!' Other times I just look and see what has grown since yesterday. (Ah yes, those marigold seeds I planted a couple of blogs ago are coming up!)

Today my attention was caught by a movement among the leaves of what will turn into 'that big clump of yellow flowers' later in the Summer. It was a grass snake, about nine inches long, about as thick as my finger, slithering between the stalk and leaves. Himself came out just at that moment, and was in time to see it wriggle smoothly through the plant and disappear under the fence into next-door's garden. That might be one of the garden highlights of the year.