Well, so much for blogging every day in November. Monday, Tuesday, Wednesday and Thursday have slid by...

It has been a good week, though, in spite of the fairly cold and dreary days. Tuesday was a sunny morning - we had intended to take bags and bags and boxes and boxes full of stuff to the charity shop in the morning, but I derailed the plan by inviting friends round for coffee and croissants.

We had a very pleasant, if slightly chilly time sitting well wrapped up under the apple tree in the pale weak sunshine, not as warm as it looked, but ok for an hour or so.

Yesterday I tidied up the Christmas stash, and also created more mess, by getting out the Christmas cards and the wooden Advent calendars from the chest. After a bit of a disaster one year when we put the tree up before we remembered where all the Christmas cards, thriftily bought in the January sales had been stored, I have been better at remembering.

For some reason I am feeling all anticipatory about Advent. I can't remember if I have already mentioned the Advent tea lights. So simple - you just put a strip of Christmas Washi tape around each one. These are the fifth and sixth sets I have made this year... using 3 bags of 50 tea lights! It is always so satisfactory when you find a box that they will go into. 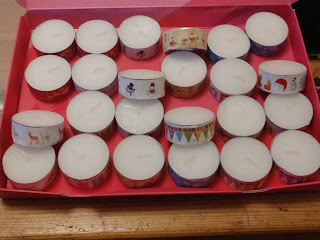 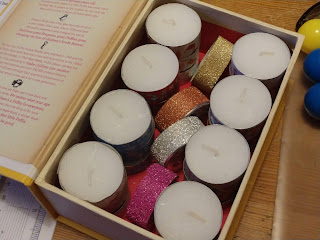 The pink box is an empty 'graze' box from my son; we met up with son and daughter this morning at a cafe halfway between where they live and where we live. The weather was far less favourable, but not exactly raining, although wearing waterproof jackets turned out to be a good idea. After hot chocolate and waffles with maple syrup (mmmm, sugar overload.....) we exchanged gifts; I handed over their chocolate Advent calendars, sets of tea lights and their Christmas stockings, and they handed over early birthday presents. The graze box contained super silly google-eye rings; 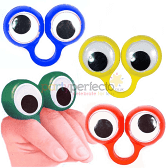 and a selection of Christmas teas; daughter gave me a Roger de Borde Advent calendar which I spotted last year and put on my 'wantables' page; you assemble it throughout December. It is with great restraint that I have left it in the packet until at least my birthday at the end of next week.

Also the Mary Oliver poetry book 'A Thousand Mornings' which I have had my eye on. I shall endeavour to read this slowly, highlighting ideas using the little mini highlighters included in the package.
So! My birthday has started - and will last all week as I savour these presents - drinking the tea and reading the poems.
As for the Christmas stash I tidied; a good deal of it went into the Christmas Stockings. (We are unlikely to be all staying together or meeting up over Christmas while covid is still quite so endemic which is why I have handed them over so early!)
And I have already filled all the little drawers in Himself's Advent calendar... 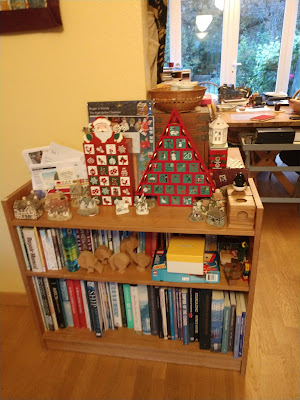 'It's beginning to feel a lot light Christmas....' 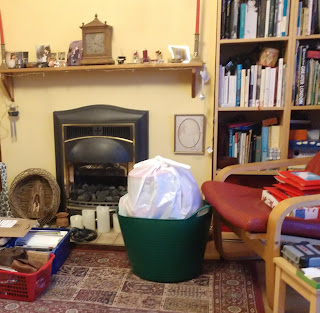 Tomorrow is another day....