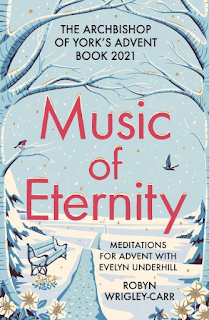 And once again there is so much in the Chapter that I've ended up skim-reading, just waiting for the phrase that will 'ping out'...

Or phrases - and here they are;

Right at the beginning;

Welcoming God will involve shifting focus from 'Mine' to 'Ours', for we're all linked as we respond in worship to our Triune God'..... We are drifting towards a religion which consciously or unconsciously keeps its eye on humanity rather than on Deity - which lays all the stress on service, and hardly any of the stress on awe: and that is a type of religion, which in practice does not wear well...in those awful moments when the pain and mystery of life are most deeply felt...It does not lead to sanctity.

We mostly spend [our] lives conjugating three verbs: to Want, to Have and to Do... forgetting that none of these verbs has any ultimate significance, except so far as it's transcended by., and included in, the fundamental verb, to Be: and that Being, not wanting, having and doing is the essence of a spiritual life.

Dante says that directly a soul ceases to say 'Mine', and says 'Ours', it makes the transition from the narrow, constricted, individual life to the truly free, personal, creative, spiritual life; in which all are linked together in one single response to the Father of all spirit, God.

At this point I stopped highlighting the text... quite soon the whole chapter would be turning yellow.

At first sight I might think that I was being asked to simply focus on our awesome God, whose power and capacity to create, save, forgive is constantly rehearsed in the Psalms.

However the emphasis on 'Mine' becoming 'Ours' as a response to this worship speaks of a mirroring of the Three Persons in the Trinity being combined together as 'Ours', not completely separated individuals each with their own 'Mine'.