Such as changing the sheets on the bed today resulted in me discovering my missing sock tucked into a fold of the fitted sheet...

presumably it hid itself there when it was in the washing machine, and stayed there while the sheet was hanging over the spare room door to dry,

clinging to its hidey-hole while I folded the sheet and jammed it into the airing cupboard... dozing in the warmth and darkness until rudely tipped out when we used that sheet to make the bed.

Such as making rice pudding in the microwave because we were running over with spare milk, taking my eyes off the bowl so that in two seconds the milk al,l over-flowed and now the microwave was running in milk...

and as we cleaned it out it became apparent that the bearing in the bit that turns the turn-table is completely worn out and so ordering a new microwave (the old one is a ripe old age)...

A bay leaf and a couple of cardamom pods

All placed into a suitable receptacle and brought to the boil, then simmered until it is not quite as thick as you think it ought to be because it will thicken as it cools. This takes maybe 30 mins, and you should stir the mix quite frequently to stop it sticking and stop that horrible skin forming. Wait, you LIKE the skin?

This makes enough for 4 portions - no, not really. Probably 4 'yogurt pot sized' portions. So He had a large portion, and I had a small one, and there was a small one left over for the next day.

The best rice puddings were made in the slow cooker, we remembered. This had been banished to the cupboard under the stairs some years ago, but was retrievable, cleanable, and soon made ready for use. But where to put it?

The consequence - plastic storage containers sorted, and a new home found for them, all corralled into suitable canvas bag and put in the broom cupboard, the bread maker repositioned and cookery books reorganised.

We shall bring it back into use next week.

That's quite enough for today - when the new microwave arrives on Monday the opposite side of the kitchen will have its chance to be cleaned and sorted... 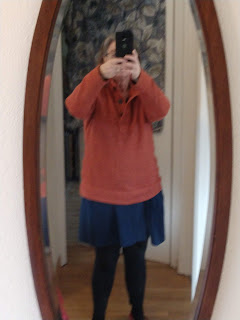