The sock is coming along - it stalled out twice; once when I picked it up after having a glass of wine and the subsequent effort of sorting out the consequences took most of the next day, and again when other projects took over. I've nearly finished the hell heel and then it should be plain sailing until I get to the toe. Now I'm hoping to get the other sock completed by the end of March. 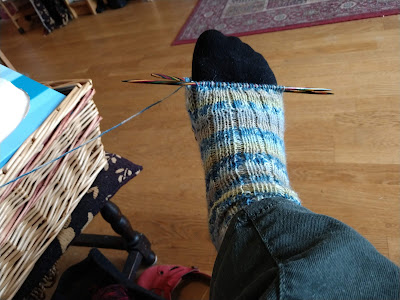 I'm also mighty relieved to see that there is a good chance it will fit.

I put off knitting socks for years, until I could be sure that I would be able to persuade myself to knit the second sock. 'Second sock syndrome' is a well known condition in knitting circles.

I've finished the wristlets, commissioned by a friend after she saw mine. why is it, that when one knits for oneself  it all goes reasonably well, but making the slight alterations in order so make it for a friend causes endless complications, dropped stitches and other issues?

Ah well, I'm at the stage of finishing off the loose ends - literally - and will soon put them in the post.

The greeny-blue jumper has also stalled out, but at least I got the 'hard thinking' part straight in my mind. I'm realising once again that it is probably unrealistic to start a winter jumper in Autumn, and similarly a Summer jumper in Spring. One should really be knitting thick heavy garments all through the long hot days of Summer, to be finished in time for the cold weather. And likewise creating airy-fairy items in linen and cotton all through the snows rains of December.

As long as I don't get side tracked by the ideas currently filling my head for a wool cosy with felted steeks for my new tea pot..... the previous stump tea pot developed a crack and was leaking tea everywhere. This one is slightly smaller. 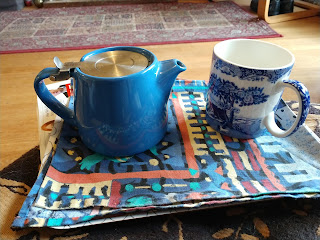 Sewing
I have been sewing a lot - another reason for the lack of progress in other areas. I completed the sewing kit, and the daffodil 'freestyle' picture, and I've nearly finished the stitchery swap postcard project I'm doing with Ang over on Tracing Rainbows. No pictures yet - I've got to wait until I'm sure she has had a chance to have a look first!
I think embroidery will be the new skill for 2022. Last year it was touch typing, which has stood me in good stead all year. Mind you, a bit of revision wouldn't come amiss.
Bread
I finished making the giant Hot Cross Bun on Saturday. Here it is about to go into the oven; 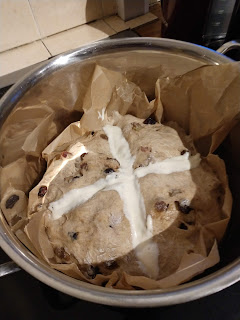 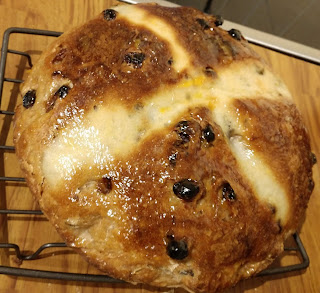 And discovering we have no container large enough to store it in. 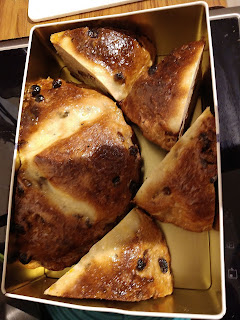 It has come out pretty well - I'm enjoying it - but himself isn't so keen. I shall slice and freeze it so that I can slowly consume it while he indulges in other more calorific treats.
I have cut one of the segments into cubes and toasted them in the air-fryer into little rusk-like bites to make snacklets for morning coffee.
Well, I guess tomorrow's post will be 'Looking forward into March' - if I get it written -
.
Posted by KirstenM at 11:40:00