I'm not doing 'New Years Resolutions' this year. I decided to start each month afresh, with a 'wish list' rather than resolutions, and see how I got on.

Did I learn the new piano pieces? NO! And I didn't do much practice either. Ah well. I did make a start on the Jacques Ibert 'Little White Donkey', and it wouldn't take much effort to finish it. I think I'll carry that one forward.

However I did finish the mitten (memo to self, next time DO use a smaller needle for the ribbing) and also a pair of socks, my first ever. 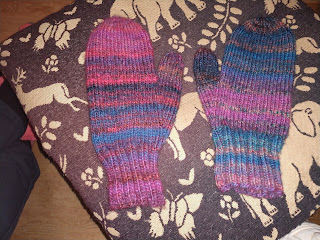 I am amused to see that laying the socks on top of the printer for the photograph has resulting in me awarding myself a star! 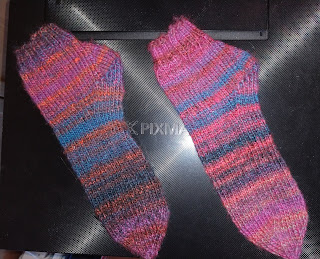 The socks have pointy toes; I did graft the toe end of the RH sock but had the sock in the wrong orientation. Who cares! I am going to use them as bed socks, which is one of the reasons why the legs are so short. The other reason is that I wasn't sure if I would have enough wool.

I did finish the other two projects; a cowl (now chopped up in the compost bin, memo to self; DO NOT knit things like that in pure Shetland wool, far too itchy) and the little white Christmas ornaments, now stuffed with lavender and reposing in my sock drawer.

Walking happened - and I now that I have discovered I can convert 30 mins ballet to approximately half a mile of walking, I shall make faster virtual progress around the Ring of Kerry.

Weight-wise I ended the month a couple of pounds lighter than I started it - in spite of the Christmas Chocolate stash, home-made macaroons and rockish scone-ish cakes, pannetone, and other delights.

Make another pair of socks in finer wool and try and get the green jumper going again (it's stuck at the moment as I work out what to do next. Following a proper pattern would have made this much easier!)

Walk more, now that the weather is improving

The new picture at the top of this blog comes from when we took a short break in Tewkesbury, oh so many years ago now. Maybe it was 2014. I notice the month is April, but it was bitterly cold when we were there, more like February. The dragon lives at the bottom of someone's garden, facing across the water meadows and the River Severn. We spoke to owner; she had commissioned it as a memorial to her husband, who came from Wales.

Here he is again, for people using their tablets or mobiles to read this post; 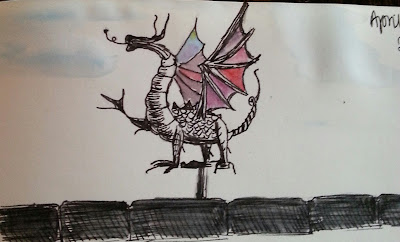