Today was bright and sunny again. I pottered about in the garden for most of the morning, sowing flower seeds; calendula and nasturtium. These can be sown out doors where they are going to flower, but that requires me to know where I want them to go. Ah. So I've put them into individual cardboard tubes in the cold frame. If I plant them in the ground, then I get confused between seedlings and weeds; this way I should now what is going on!

I've also planted a 'bee-friendly plant bomb' that I had  been given a while ago.

Instead of hurling it into the undergrowth, I have spread the contents over a seed tray so see what comes up. I have a notion of creating a wildflower patch somewhere in the garden, and I read in a blog post from 'notes from a smallholding' about starting the wildflowers from seed in pots, to be planted out later.

I had some other 'seed bombs' last year, and they did seem to come up, in a random sort of fashion. This way I can be a bit more certain.

Noah's Ark; Saturday - these look like quails; the reference is Exodus, but this morning I had reached the chapter in Numbers where the Israelites have a big moan about the food, and God says he will give them so many quails that they will get sick of them. 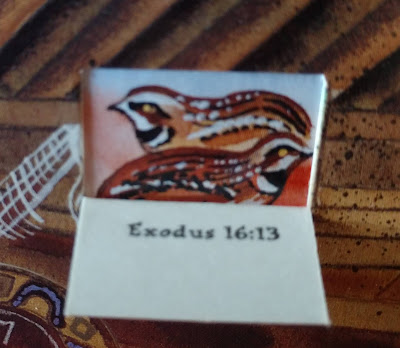 Yesterday; Some deer, and a phrase from a well known Psalm;  As a deer longs for flowing streams,    so my soul longs for you, O God. 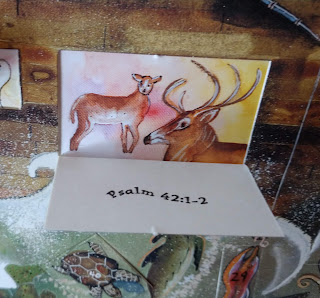 Today; It's an eagle, and those verse from Deuteronomy will be familiar to readers of Tolkein as well as  Bible readers;

As an eagle stirs up its nest,Hovers over its young,Spreading out its wings, taking them up,Carrying them on its wings,12 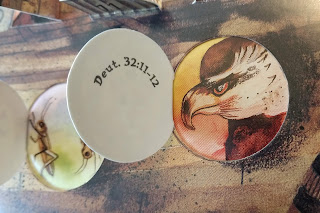