I'm finding it quite hard to tell... my eyes have been so wanting to close themselves all day. Now, at half past eight in the evening I'm clock-watching until it can be time for bed. (going up early isn't helpful!)

I have given you authority to trample on snakes and scorpions and to overcome all the power of the enemy; nothing will harm you.  However, do not rejoice that the spirits submit to you, but rejoice that your names are written in heaven. 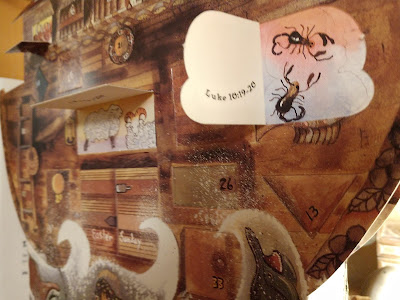 Today was oxen, looking quite snug in their quarters. I hope they can't read; the scripture is Proverbs

Better a small serving of vegetables with love than a fattened calf with hatred.

I'm fairly certain that they would be in agreement regarding the best menu. 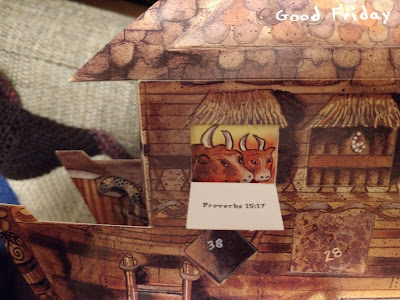 I have finished the first sock, and it fits - I should have had more confidence, even though I was using a different yarn and different needles to the ones specified in the pattern.

I am now marking where start knitting from each day, in order to encourage myself with visual evidence of progress. So the little yellow marker shows where I got to on Saturday, and I did all the rest on Sunday, in spite of my hand threatening to cramp every so often. 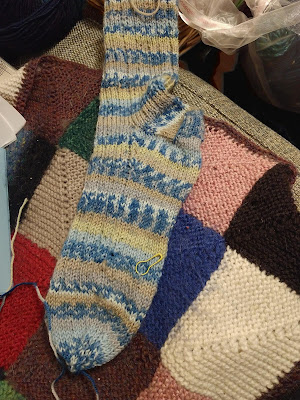 If the sock fits, wear it! Though it would make sense to wait until the other one is done. The fabric is quite loose and open; the pattern specified smaller needles which would have given a closer, and better texture. Still, I shall knit its twin on the same needles, and remember for next time. These are 3mm diameter needles; whether I can cope with even thinner ones remains to be seen. 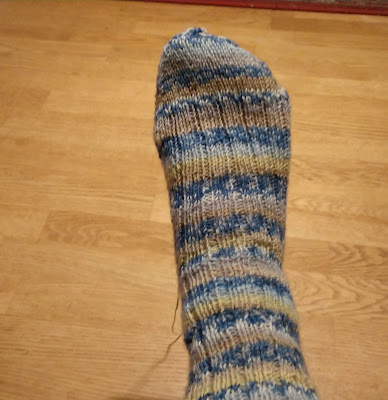 The tea cosy continues; I tried it on (the teapot, not me, obviously) on Sunday, and it was just about the same height. Allowing for shrinkage after the felting process, it wants to be about half as tall again. It does seem to be about half as wide as it needs to be which makes me feel hopeful. 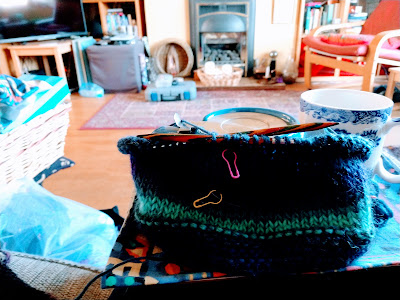 I continued from the pink marker today, and added all the nine tags in among the stitches along the needle to mark the decreases; I shall do a round with K2tog (knit two stitches together) after each marker, and then a round with no decreases, and repeat these two rounds in the hope of achieving a fairly flat top. 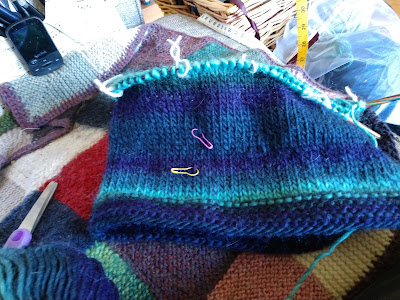 Then I shall wash the completed copy with soap, hot water, and violence, to turn it into felt. Assuming it turns out roughly the right size, I shall do some stitching either side of where I propose to cut slits for the handle and spout, and then either celebrate, or cut it up into pieces and put it in the compost bin compost according to whether I have succeeded or not.
Sewing;
I managed another couple of rows yesterday of the 'try-a-stitch-Tuesday' series (www.pintangle.com). Buttonhole and stem stitch. I think that completes the January posts. I had no brain for sewing today. 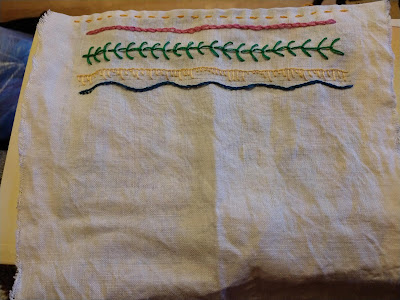 The weather outside was beautiful - sunny, with the daffodils nodding in the garden, the little sparrows and middling sized starlings and enormous magpies all busy-busy at the bird feeders.

I stuck my nose out-of-doors, considering taking a short walk, and promptly ducked back inside again. Not a cheerful breeze out there, but a blisteringly cold wind.

By tea time I was 'finished' with the day. We had sandwiches and 'salady-bits'. I was so tired I cut up my sandwiches into tiny squares to make it easier (do you use scissors to cut up your sandwiches? I always do). Some kinds of cold meat (like corned beef) are easy to eat, but other kinds, like Italian cured hams are resistant to teeth, so scissoring it all up beforehand can take the effort out of the eating. 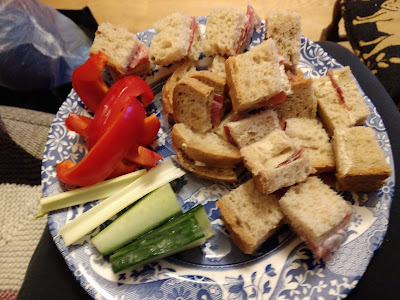