The weights have arrived - a small heavy parcel.

I was slightly alarmed, but of course ALL the weights for BOTH ankles were in the one parcel, a total of 10 pounds, or rather nearly 10 pounds. It's not entirely clear to me what the unit of measurement is - does it matter? Nah, not really.

Each anklet has five little pockets, and each pocket has a little packet of some kind of heavy sand, and each packet of sand weighs around fifteen and a half ounces, or whatever that is in kilos. Or grams. 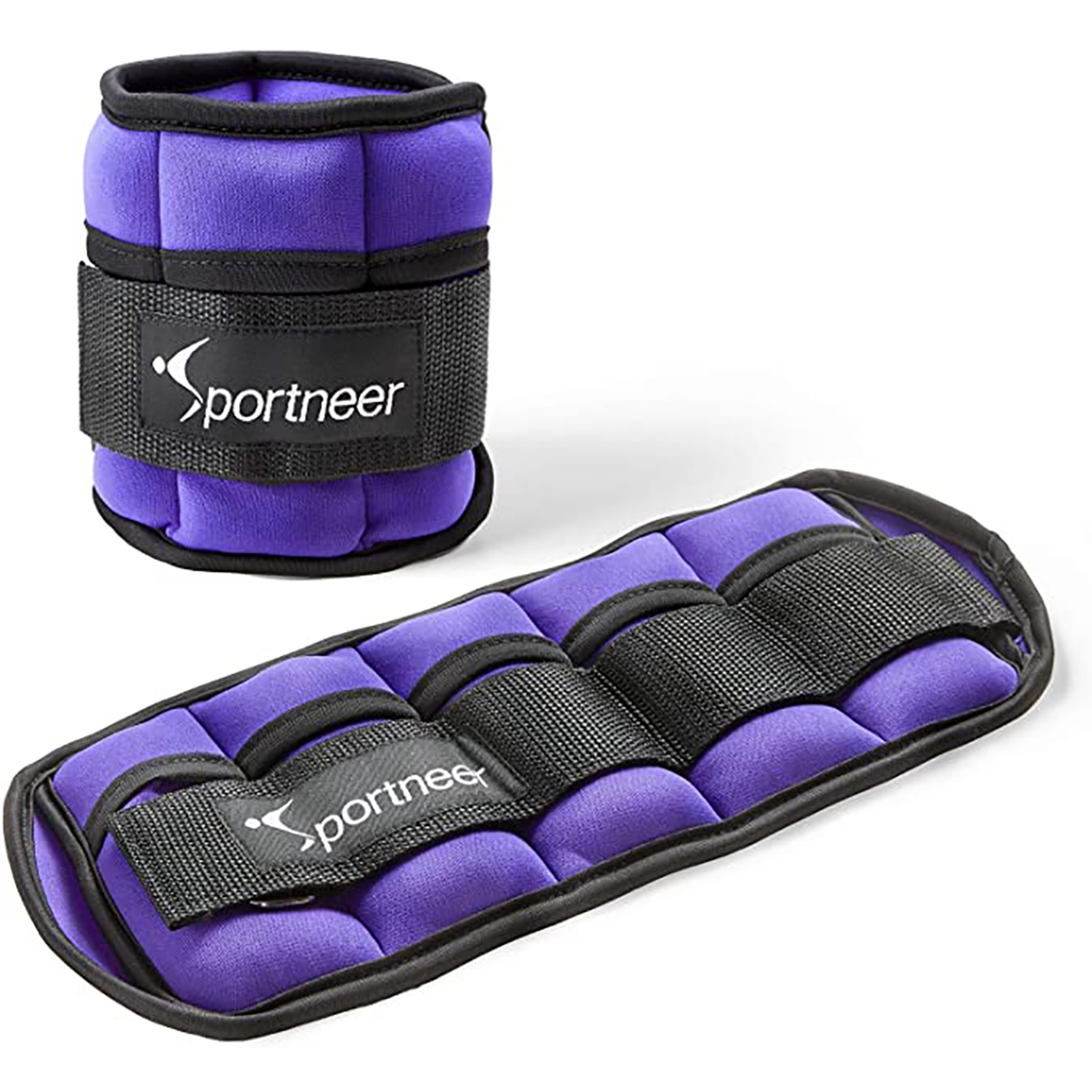 So I have removed four packets from each anklet, and tomorrow (or the next day) I shall have a go at strength training, starting at below level 1., as then I'm more likely to succeed. Never set yourself up for failure - aim low, and you will taste success, as I tell my piano pupils. It blows their mind after all the years of inspirational, challenge yourself, must try harder, gubbins they get all day at school.

They whole lot is stored in a stout canvas shopping bag at floor level, as advised in the book.

Low target setting is why my step count target at the moment is only 1250. I'm much happier reaching my step count most days, even without going for a walk, than missing it every day. I've got 1000 steps or so already, (it is 6pm) from pottering around in the garden all day, and should be able to get the rest by bedtime. I have been known to pace up and down the landing for five or ten minutes just to reach the magic number.

Yesterday; Bees. The book of Sirach is not one I've encountered; before. It is in the Roman Catholic and Orthodox Bible, but Anglicans keep it in a separate section called the apocrypha. I'm not going into all that... although I did encounter another book in the apocrypha in the novel 'Miss Garnett's Angel' by Sally Rooney, which references the story of Tobias and the angel.

"The bee is small among flying creatures,

but what it produces is the best of sweet things." 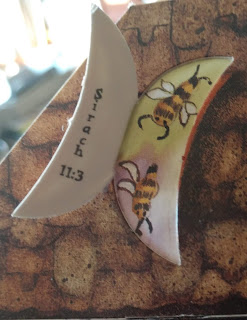 Catch for us the foxes,    the little foxesthat ruin the vineyards,    our vineyards that are in bloom 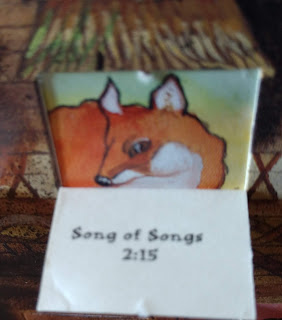 We used to have a problem with foxes, the little foxes, that ruined our milk, delivered by the milkman. They would pick up the plastic bottles and run around the garden with them, piecing the plastic with their teeth. We fixed that by putting out a milk protector, an upturned bucket with a half brick screwed to the top to act as a handle. Our usual milkman is used to the way that the bucket comes too when he lifts the brick, but I wonder what temporary milkmen think. 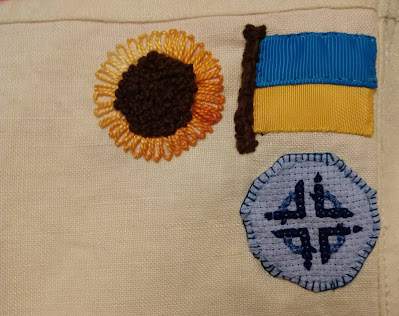 These are on the cloth that has her name and address on it, and are her mementoes of her month of March.

The embroidery I sent to Ang is less topical as concerns current affairs; I sewed a picture devised from a selection of my favourite prints, and also celebrating my new developing skill of making a reasonable fist of satin stitch (aim low!) I also enjoyed using the variegated threads I bought, 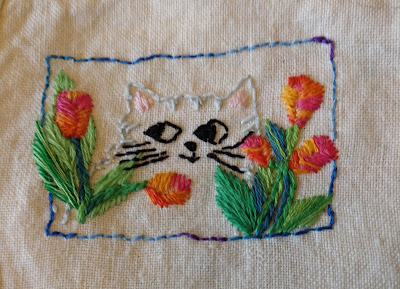 and also learning how to start and finish bits of stitching without leaving knots. Of course, the cat is on the cloth with my name and address - but, do I end up with the cloth with Ang's name or mine? Either would be appropriate! 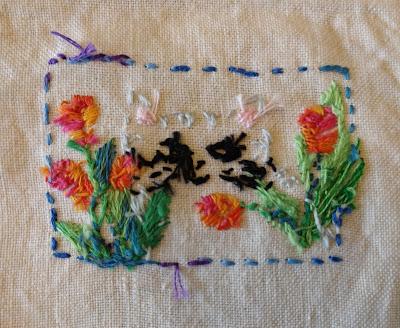 Now I am starting to think about what I sew onto Ang's cloth for April - Easter is an obvious theme... and I need to create the 'postage stamp'. But I think I know what I am doing for that - I just have to practice drawing it a couple of times until I have learned the shapes.

Piano teaching has had its moments this week; you need a surprisingly mathematical head to work out how to play the first movement of Mozart's sonata K331. We've been working on the ornaments variation 5, the slow one; (I can spot the error in my notation now, but it gives the general idea. For perfection, there should be 4 horizontal beams joining notes grouped under each bracketed 3...oooops) 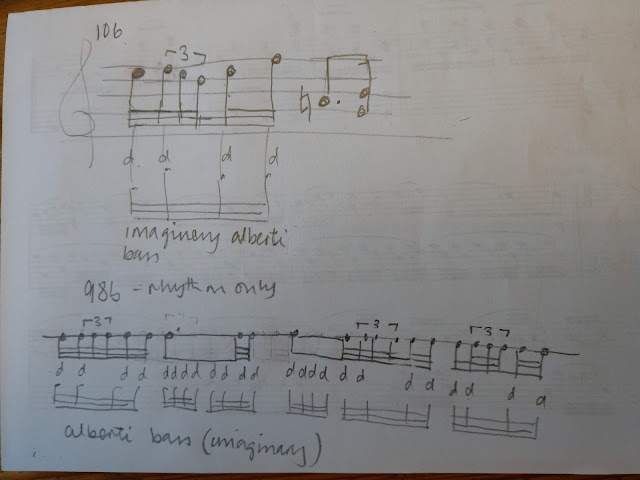 I think we got there; my student had sort of crammed the notes in together in a flurry of activity, very similar in result to tidying a room by shoving everything under your bed.

Here's Daniel Barenboim demonstrating how 'easy' it is. The slow variation starts at 7'58", but listen to it all; it is divine! I haven't heard my student play any of this except the slow variation - she says she has already learned it, which makes me a little worried as to HOW she has learned it! There was a time I could play it, after a fashion...