I was up and downstairs before 8 am this morning, having cleaned the loo - a usual Monday task that sometimes slips by a day or several, and put away the laundry, done my exercises, listened to yesterday's Bible in one Year chunk and part of today's (that seemed to have slipped by a day), done the sketch for yesterday, and had breakfast in bed.

Wowsers! I'm not usually so quick. However, the plumber was due from 8am to fix both that leak we found under the kitchen sink and also a slow leak from the heated towel rail in the bathroom, so I wanted to have upstairs reasonably clean and tidy, be presentable and ready to stay out of the way in good time.

The plumber arrived at about 10.

Ah well. We were ready for him whenever he came.

He needed to drain the whole system, but once that was done, he was fairly quick. Certainly gone by the time the window cleaners arrived.

And everyone was gone in time to cook lunch.

Meanwhile I discovered that a book I had my eye on; Arthur Parkinson's 'The Flower Yard' was on offer for Kindle for 99p! Instant download, with a view to buying the actual book! And I'm really glad I bought it on Kindle for 99p instead of new for £14.99, because although it is a lovely book and full of beautiful pictures, it isn't exactly what I was hoping for. More coffee table book than the kind of ideas and information that I wanted. I've skim read through, and will go back to peer at the pictures, but if I had been able to get to a bookshop to look at it first I would have had a clearer idea of the contents.

I am plagued by a couple of slugs or snails in my vegetable tubs. Most of them are completely clear, and I think I have dealt with the marauders in the broad beans. I had a brainwave - and transplanted a couple of young lettuces around the base of the peas and broad beans, thinking that the pests would go for these in preference. Success! There was the most humungous snail just about to breakfast off one of the lettuces, so I was able to pick it off and fling it high over the hedge. Not into the neighbours, I hasten to add, but into the common land behind us. I know they are homing creatures, but I put some energy into that throw so that should be that.

To my surprise, I read an article later suggesting that you can protect your crops by planting sacrificial lettuces and marigold between your 'real' crops, as slugs and snails would rather eat these, especially lettuces with soft juicy leaves. 'No greater love hath a lettuce, than to sacrifice its leaves to save the peas...'?

Here is the 'Baby Surprise Jacket' so far; 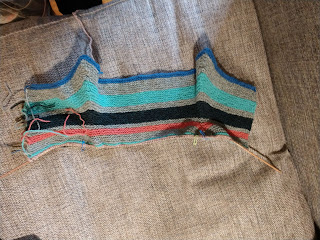 Look below, I think you might be able to see how this is going to end up - the blue, cast on edge, will become the back neck and shoulders, and also the cuffs. The orange stripe goes across the back at the underarms and then round up to the shoulders. 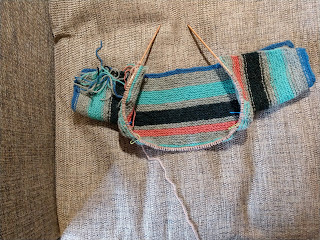 Now the knitting that happens will make the left and right fronts, and the back, all in one go. I'm still increasing by two stitches at each corner (you can see them better in the top photograph, they are hidden by the needles in the lower photograph). In a few more rows I shall cast off about 30 stitches at the beginning and end, to make the neck.

I deliberately used the scrap of blue wool to do the first couple of rows, because once the whole thing is made and off the needles it is quite mind-bending to work out how to turn it into a jacket.

I've put it away for the rest of today, as I still have to get this ready to post; 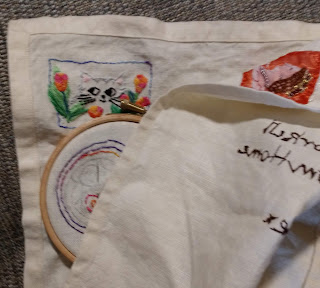