Sooner or later things catch up on one. All the things that should have been done earlier in the week began to tip over from pending to urgent.

I was distracted from getting started by a couple of parcels waiting for me to open - we still leave them in the hall for a day before opening, which is plenty long enough for me to forget they have been delivered;

One hundred and twenty assorted teabags - yes, a tad excessive, but delivery was free if your order came to £20 or over; 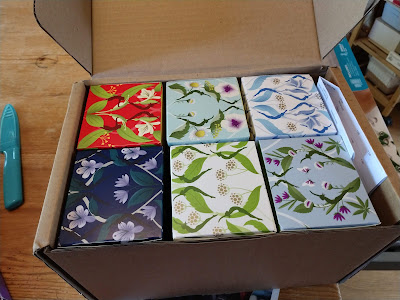 I chose random flavours when I placed the order according to the name (or promise?) on the box; peace, relax, cleanse (no, not a laxative!), night-time, feel new, and revitalize - that's the red box. I just pick one according to the colour.

And also, Ang's stitching was waiting for me! 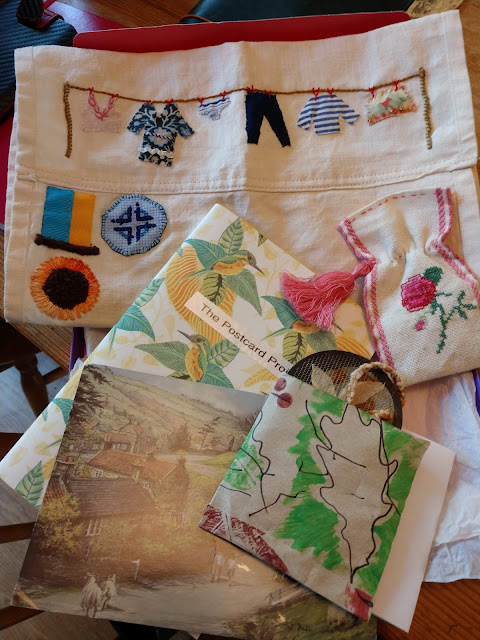 She's created a washing line, even including jeans and a stripy breton top! There were little gifts as well, a lavender sachet with a cross stitch rose, and a curious hand-made gift tag which you can see peeking out of it's hand-made bag.

We are slowly working towards getting our rotary drying line up; it has been a work in progress for about 5 or 6 years, but I'm hoping this year will be the one where it actually happens. The obstacles - like clearing the space for the washing to safely flap around in, and sorting out how to fix it into the concrete slab have been cleared one by one, and the final solution is in sight.

I made a pot of revitalize tea - it has a marked ginger flavour - and got stuck into the list of procrastinated tasks;

Finishing the last few stitches and ironing the fabric, packing and posting to Ang in time to catch the last post for the weekend, writing two postcards and a letter and packing up another parcel.

The letter entailed copying up some notes first to go in the letter, so I did that, and the parcel was the result of a phone call that was moving from 'soonish' to 'now' to 'do it today'! 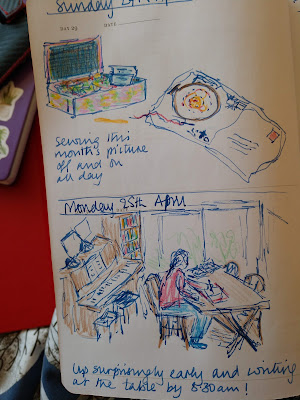 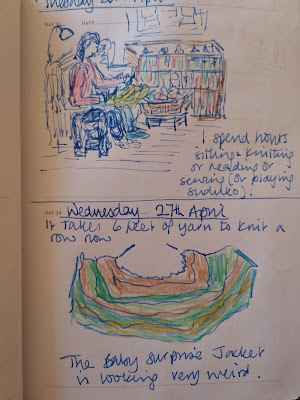 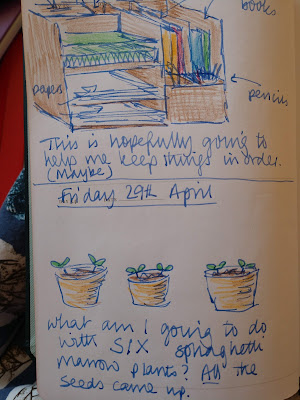