Himself had a three-hour optician appointment... so he drove us both there, and I went on to a nearby National Trust House and Garden to wait.

That makes it four times now that I have driven the car since March 2020!

And today was the first time either of us had visited a National Trust place  since March 2020.

And the first time I had been out and about (apart from meeting up in a garden with a friend for coffee) on my own since March 2020.

And the first time I have been into a cafe and bought a coffee since March 2020.

And, when I drove us both home afterwards, the first time I had driven more than 3 miles since March 2020  - this trip was roughly 20 miles or so each way.

So now I have clocked up five trips, and about thirty miles since March 2020. Before then I used to drive around 200 miles a week, criss-crossing the county from one school to another, loaded up with such a weird variety of instruments - trumpets, clarinets, recorders, keyboards, ukuleles, cellos, violas, samba drums and djembes, ocarinas and a wild and wacky selection of percussion instruments. How things have changed!

Both of us were feeling fairly wiped out by our experiences today - when we got home we had just tomato soup with toast and marmite for lunch. Come suppertime we put the planned meal into the freezer and and settled for comfort food - scrambled eggs on toast, with fried tomatoes.

Normal life (what IS normal these days?) might be resumed tomorrow - after a zoom routine clinic appointment following on from the lung function tests last Monday!

I have posted the 'Postcard Project' to Ang this afternoon; I was determined to try and get it to her before the end of the month, and I may just have managed it. I won't put up any photographs today, as it would spoil the surprise.

And the next four 'daily drawings' are here;

Wednesday; I have had a set of Derwent colouring pencils for maybe twenty years, and have been trying them out, following some youtube tutorials. I quite like using them, but don't find them 'exciting', like watercolours or lino printing.
Thursday; these poppies are amazing; they were a joy last year and the same this year. They have a white cross in the centre, formed by a pale stripe on each petal.
Friday; Vicky and I are planning a living willow screen to hide an ugly plastic garden storage shed at the bottom of the garden.
Saturday; every so often Himself bakes a batch of gingernuts and a kind of flapjack called 'flakemeal shortbread', recipes that his mother used to make. It's only Monday evening and we have already eaten most of them. 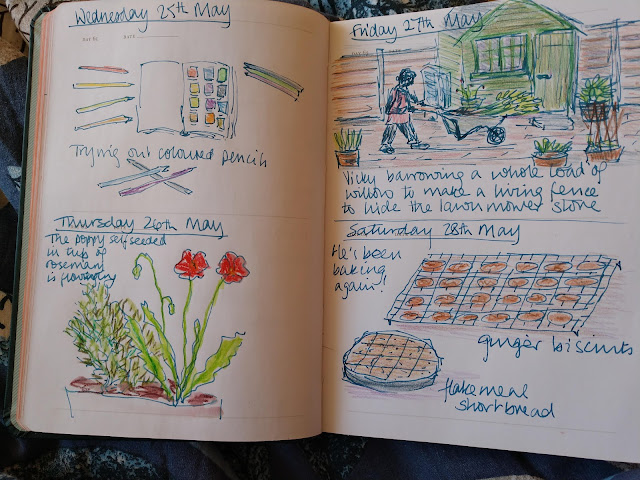