I'm sure I've seen pictures of subsistence farmers creating little dams around their plants. While I was hunting for the information, I came across this quote in an article on drip irrigation systems in agriculture.

When the well’s dry, we know the worth of water,” Benjamin Franklin wrote in a 1746 edition of Poor Richard’s Almanack. He didn’t know the half of it. Today’s global population is 10 times what it was back then, and freshwater sources are in decline. The biggest water hog by far is agriculture, which accounts for almost three-quarters of global use.

I'm sure I've seen pictures of subsistence farmers creating little dams around their plants. While I was hunting for the information, I came across this quote in an article on drip irrigation systems in agriculture.
Aha, this is the same idea;
and I think I might take steps create a little well around my plants to control where the water goes when I am watering. My vegetables are all in patio tubs and pots, which must have a similar effect.
Anyway, that wasn't what I was going to blog about.
I finished making the creme de cassis earlier this morning. From half a pound of blackcurrants, I got about half a pint of liquid for the next stage (adding sugar and reducing over low heat). It didn't take all that long to reduce, even t a very low heat, because it was such a thin layer in the pan. I added the brandy after reducing while it was still warm, as the residue in the pan was beginning to set like blackcurrant jelly. Yes, I did lick out the pan, and yes, it was delicious.
My final yield is a bit less than 6 fluid ounces, and has gone back into the little wine bottle that supplied the wine for the first stage. Ice cream and creme de cassis sounds like a good summer desert to me.
I'm also enjoying the consequences to the white cotton cloth I used to drip the pulp through; It turned a beautiful vibrant red. Then I rinsed it through and it became a dark purple blackcurrant colour, and now it is drying to a kind of violet. I wonder what if the colour will transfer to whatever I use it for next?
It also occurred to me that you could take a jar of, say, orange jelly marmalade, or apple jelly, or something jelly, melt it, add brandy or vodka in the proportions of 1 part hooch to 3 parts fruit, and see if that turned into something delicious? Worth a try?
Drawings
Next door's sunflowers are humungous - about 8 or 9 feet tall at the back, and a mere 5 or 6 feet at the front of their border. We can share the beauty from our garden. I think I have identified an approximately similar-facing spot in our garden to try them next year, is this year's sunflowers have been disappointing . 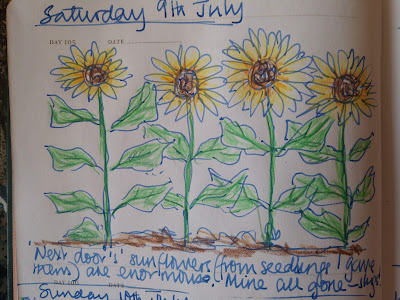 We've had the parasol out once or twice. Eating out side (in a shady spot) makes me feel like we have gone abroad for a holiday, and are having a meal in some bistro somewhere. 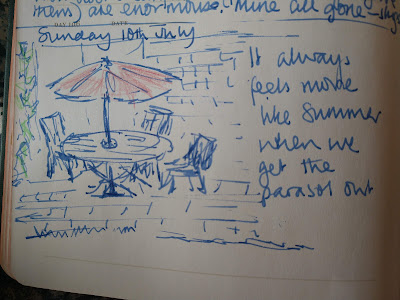 The window box on the shed is dull, and never gets the sun. So I have decided to draw some fairly simplistic flowers, laminate them, and put them in the window box instead. Still a work in progress. 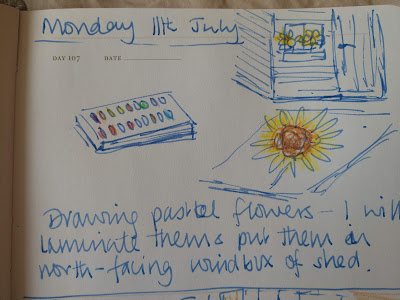 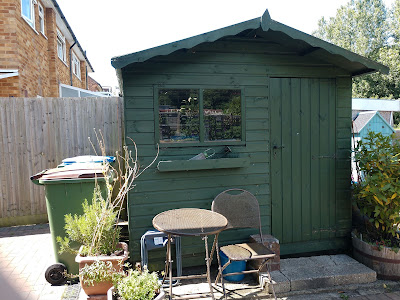