Tuesday 12th July - Just about half an hour left

I've just another half hour, I reckon, sitting at this table before the sun reaches me. Then I shall move - to the table under the apple tree if my wifi will reach that far, or to the table by the shed which is currently in the sun, but not for very much longer.

It is 11 am - I have sons lettuce in pots, and pak choi in the now empty broad bean tub. I expect 'Veg in one Bed' will have thoughts about that - but then Huw wants me to plant turnips and that is never going to happen. I will read this book this evening and discover what I should have done.

I have a horrid suspicion that the cuttings I have tenderly nurtured since last Autum are not, after all, Salvia Armistead, but WEEDS. I shall ask Vicky-the-Gardener before I chuck them, just in case. But my hopes are low.

To business; Elizabeth asked me about the creme de cassis recipe;

I had only half a pound of black currants, and a small bottle of red wine made a very scant half pint. I'm still at the 'steep the black currants in the wine for 48 hours' phase. 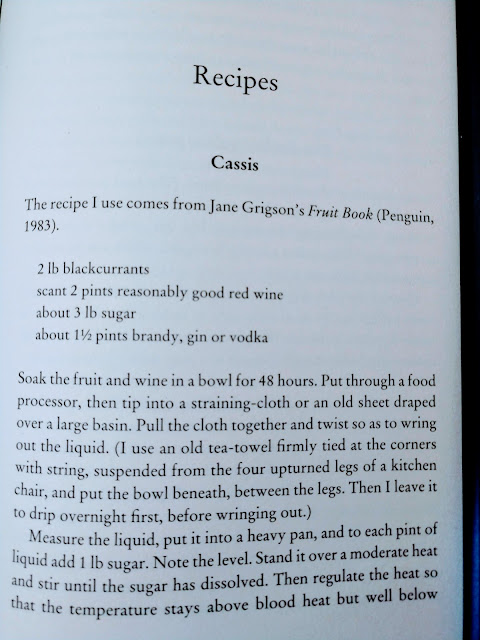 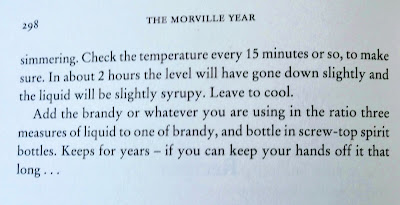 Drawings; - Ah, in reverse order of the days. That's rather appropriate, considering the difficulties I was having with 'which day is it today?' last week.
On Friday, I finally finished up the postcard project for June and sent it off. I'm glad to say it arrived the following morning. I can't show you my embroidery for June, as I forgot to photograph it first. However Ang did so today.  I'm not happy with the wonky vase bottom right, and had thoughts of cutting out, and then dismissed them. Maybe that tile was painted by a beginner! 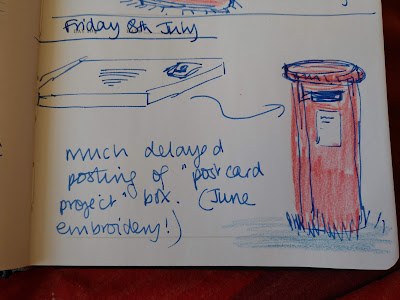 Thursday I had a fit of housecleaning. This doesn't often happen, so was worth recording. 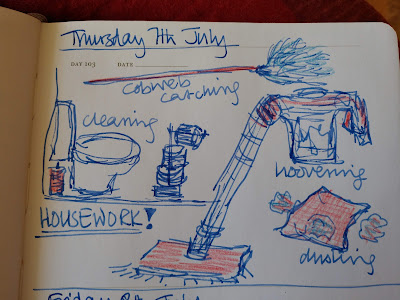 Wednesday felt like a 'too many people', 'too much communication' day. Which is a bit mean of me, because I did enjoy each of the zooms and emails and so forth. Maybe it was like eating a whole box of chocolates in one go? 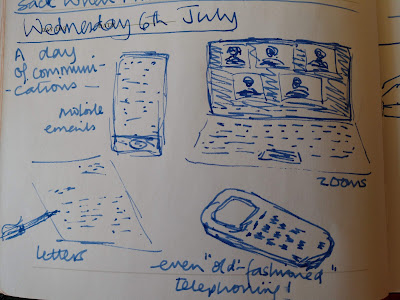 On Tuesday I discovered a stealth anti-slug and snail weapon that had been hiding from me; A large and rather flattened toad under the potato sack I emptied. How did he survive under that weight of earth, I wonder? He slowly inflated a bit over five or ten minutes, and then, when I was looking elsewhere, disappeared. 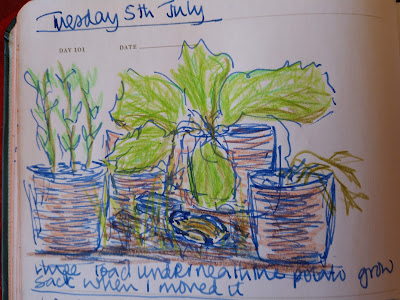 The sun has reached me, my tea has gone cold, and it is time to make a move. We shall shift a little table and two chairs to right up close to the house, where it will remain in shadow until only just after lunch. But the area by the shed will be shady by then. (it is in full sun now!)