Hello! It is October - half way through October!

What happens is I forget to blog for a few days, and then there is so much to say that it all seems like too much, so I don't post anything, which doesn't really improve the situation. Ah well. I'm here now. 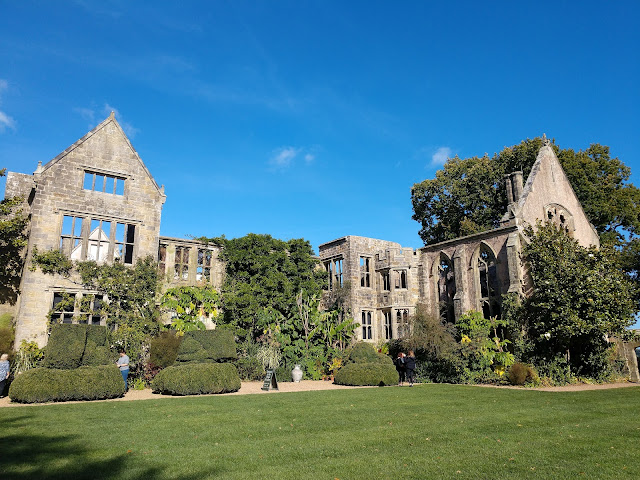 This is a the ruins of Nymans - a favourite National Trust place for us. We were there on Thursday; a lovely, bright sunny morning. You can go inside the ruins - there is a whole house in there, concealed behind the original walls. We didn't go in this time, though; I'm still 'not going in' (as opposed to 'not going out' - where does that phrase come from?). When I do go round, I always look out for the old television set, placed inside a puppet theatre, so that the curtains can be decently drawn across the the blank screen when it was not in use. Harking back to a time when television was regarded as rather 'modern', and 'not quite the thing for cultured people' no doubt.
I was rather miffed to discover that I had missed the start of Inktober. Then I realised, of course, that I have been doing a drawing a day since April this year so Inktober wasn't so relevant to me this year.
At the moment I am knitting woolly hats to go into the Shoeboxes for Roumania collection that our church does every year. I've knitted two of these adult sized stripy patterned hats now and am part way through a slightly smaller one in a thicker yarn. I don't know how many more I will get finished before packing day on 6th November.
The basic pattern is so easy, called 'simple is best', free from lovecrafts.com. It is just all in knit stitch, on a circular needle until you switch to dpns for the last rows of decreases. 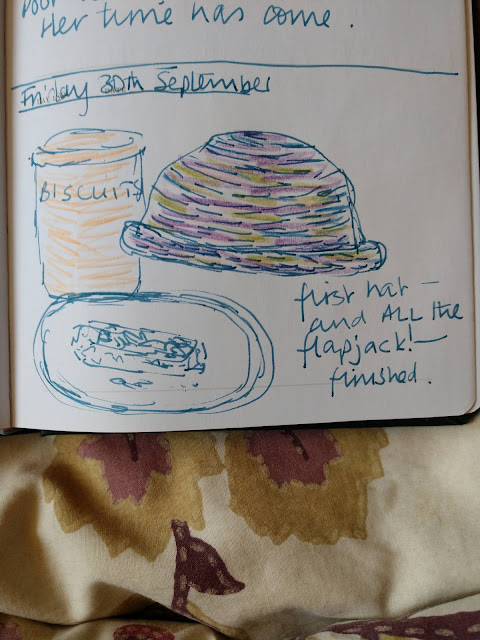 You might be a bit mystified by the 'her time has come' comment at the top of the drawing. There is a sketch to accompany it, but I didn't want to post it; it refers to one of our two cats, Leo (we thought she was male when we named her). We had to take her to the vet on Thursday 29th September; over a couple of days it became clear that her joints were giving her considerable pain, and she was very unsteady on her legs. It was a snap decision (although we had seen it coming for several weeks) that morning. This is how she was spending most of her days for the last month; 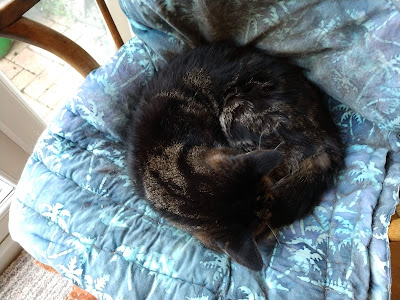 Of course we (and the remaining cat) miss her, but I don't miss watching her moving around so stiffly and cautiously.
Lots of other stuff has happened over the month, fun stuff like meeting up with the 'children' at our favourite farm shop cafe for breakfast last week, and less fun stuff like having the latest Covid Booster - my word, this one is a bit of a shock after the previous versions. Bu we were more or less recovered after a day or so.
I hope you all managed to watch the Young Musician of the Year instrumental and concerto finals; I expect you can find them on BBC4 catchup/iplayer whatever. Well worth it. The pianists would have made this look and sound easy... 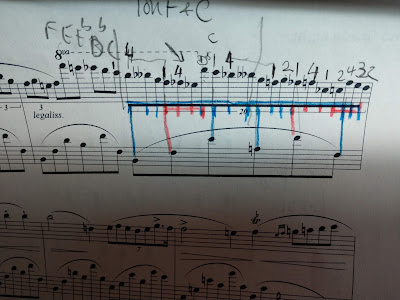 My Grade 8 student and I are both 'working towards' rather than 'at the expected level' - to use edu-speak trying to persuade 20 notes in the RH flow seamlessly against 6 in the LH. Brain-bending stuff.
From Chopin's Nocturne in Bflat minor. I seem to remember it featured in a Lewis (or was it Morse?) programme about a girls school being apparently haunted by a murderous ghost...
Here's Rubenstein's performance - beautiful.