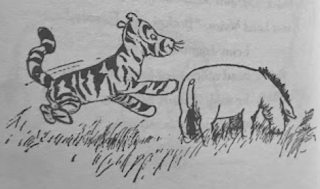 “How did you fall in, Eeyore?" asked Rabbit, as he dried him with Piglet's handkerchief.

I have been putting off making a dental appointment for several weeks - Summer was cataract operations for BB, and then we waiting for the Covid boosters, and then for the flu vaccinations, and all the time my teeth felt reasonably fine so I wasn't worrying.

However, these past few days the twinging molar has become - more twinging, shall we say, so I phoned the dentists. Our beloved dentist (yes, I can call him that; he had the gentlest touch and was almost the only one to do any work on my teeth for the last 36 years apart from his daughter who had the same light touch, and once or twice when there was a locum who was equally good) he retired. I suppose if he is about the same age as us that is not too surprising.

Our children have given positive feedback about the new dentist, so I phoned expecting to make an appointment for a couple of week's time.

'Yes, that's fine, we can fit you in tomorrow afternoon'.

I know just how Eeyore felt.