Thursday 10th November - Still on top of things - How long can this last?

Ten days into November and I'm still roughly keeping on top of things.

Admin; writing up and emailing the note for yesterday's piano lessons, posting the notebook for this month's swap (my notebook partner's book dropped through the letter box today - hooray!)

Housework; washed the windows in the small bedroom which catch the morning light and annoy me when the sun is shining and shows up every mark and smear. The cobwebs were something to marvel at - all due to that big black spider that scuttled into the crevices as my wet soapy cloth came near.

Sewing for the post card project; it is a minor marvel that I am already part way through this month's design.

Knitting; I'm suffering from second sock syndrome, you know, the sock I was going to finish last February? I've had a torrid time with it and in the end started again.

Christmas; What?!? I hear you cry! I've wrapped a couple of presents ready for a family meet up in a few days, so save posting them as one is heavy and the other flimsy.

Other stuff; I had a brainwave, and waited until I was alone in the house to explore my plans for a major furniture reshuffle involving me new desk, the ailing Roland digital harpsichord, my stationery trolley on wheels and a small filing cabinet on wheels. I managed to get everything measured, drawn up on graph paper and little shapes cut out for the relevant items before He returned from his work to find - well, it could have been worse. I had managed to restrict myself to paper cut outs, and not physically move anything while he was out.

The harpsichord needs a replacement power supply (Roland don't appear to make that particular one  anymore) and the power strip it plugs in to needs replacing as one by one the individually switched sockets have stopped working so only one is functional.

So step one will be source the power supply, step two is a biggy, because the lead for the power strip goes BEHIND the tall cabinets to the socket behind the furthest one - there is a hole cut into the back of the cupboard at that point (are you still with me?).

As a gesture towards this, I have given up my wastepaper basket to become a home for all the knitting needles which were in the way.

But now, where shall I deposit all the little snips of paper and stray threads? This is perfect. Youtube to the rescue. 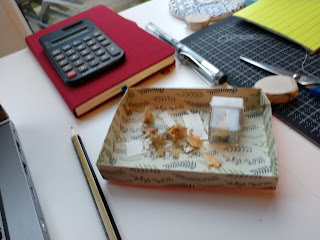 And here are the instructions. If, like me, relentessly chirpy cheerful musak drives you mad, you can perfectly well watch it with the sound off. Although there seems to be a cute little giggling baby on the track at one point.