May I respectfully advise you to move house every five years as a matter of principle? In the first eight years of our married life, we lived in four different houses, which meant that roughly every two years we cleared the loft and de-cluttered. We have been in this house for twenty-eight years now, and the consequences with regard to clutter are truly, truly appalling.

We needed to clear a space roughly 24 inches square for a piece of kit due to be delivered and installed on Thursday. We are not sure where it will go; one place is the hall, and the other could be our bedroom.

We've done a massive, massive clearout this weekend. It started with an IKEA trip to buy some stacking shelving to sort out the hall: 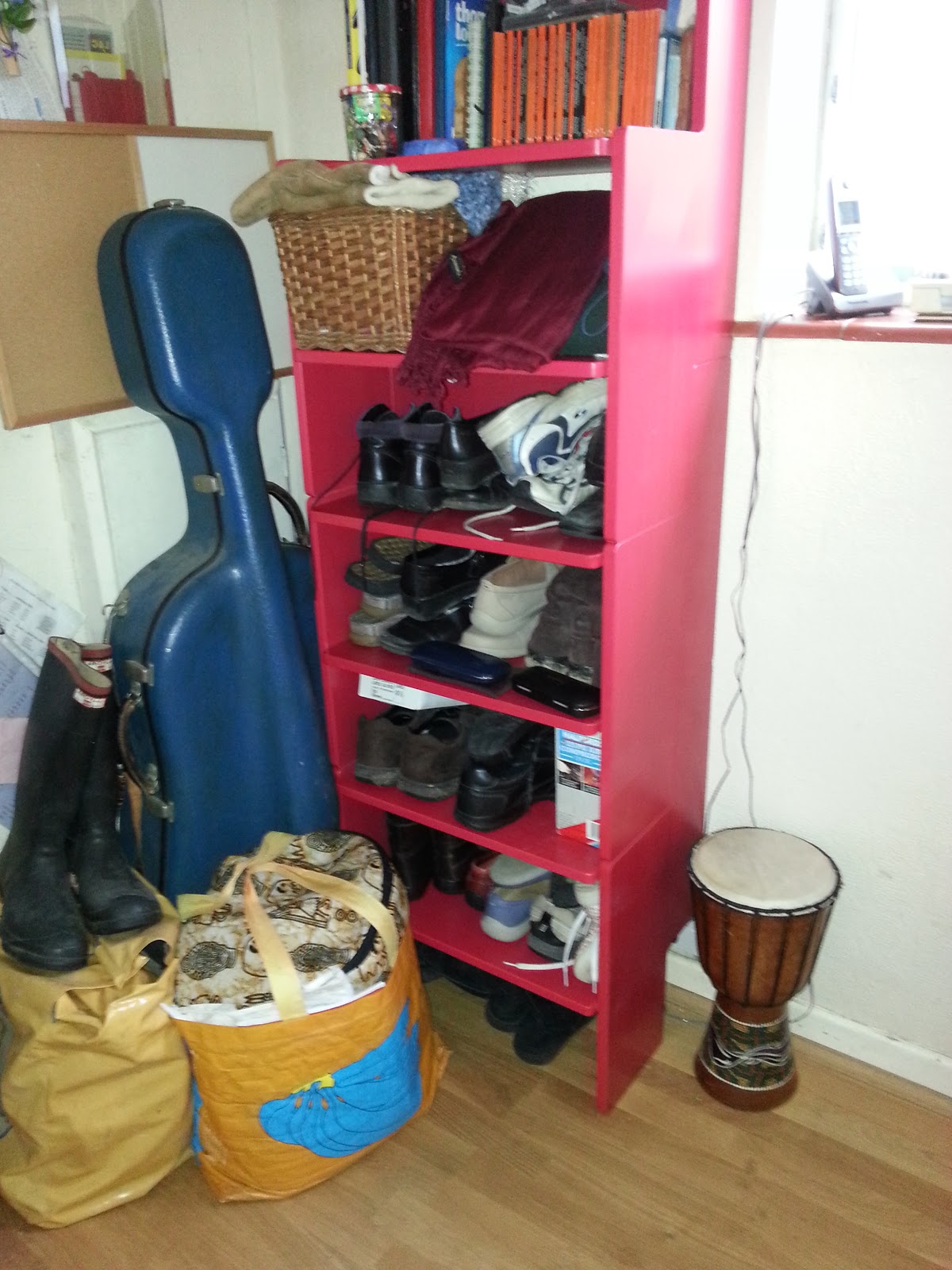 The two bags will need to be rehomed before they get too used to living there; one is ful of wellies which we hardly ever use, but would probably regret disposing of, and the other is my samba drum. YOU may think it looks too cluttered and untidy; well, you should have seen it before! Anyway, if the machine has to go in the hall, then it will fit in the space at the bottom of the stairs currently occupied by the djembe drum. That was Saturday.
.On Sunday, after breakfast, we girded our loins and set to work in our bedroom. Step one was to dump everything on the bed. The space we had in mind proved to be too small, one we excavated it and were able to get a tape measure into the corner.  ﻿ 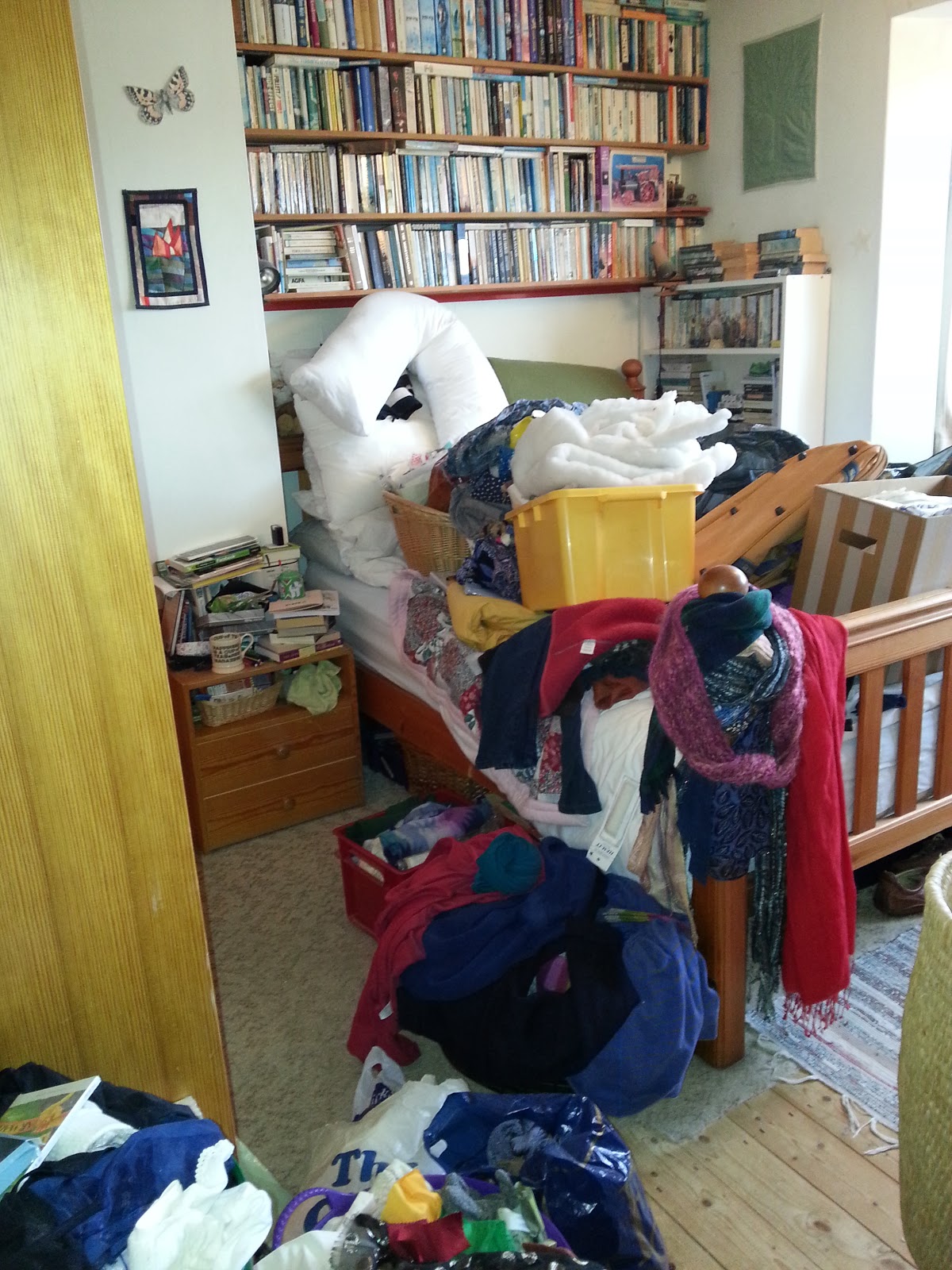 That meant dismantling some shelves, (revealing the consequences of my home decorating impulse many years before) and moving some other furniture to fill the small space and create a larger space. More stuff stacked on the bed; the cat came in, ran three times round the chaos, scrambled through the debris and fled in a panic. She hates change.﻿
﻿ 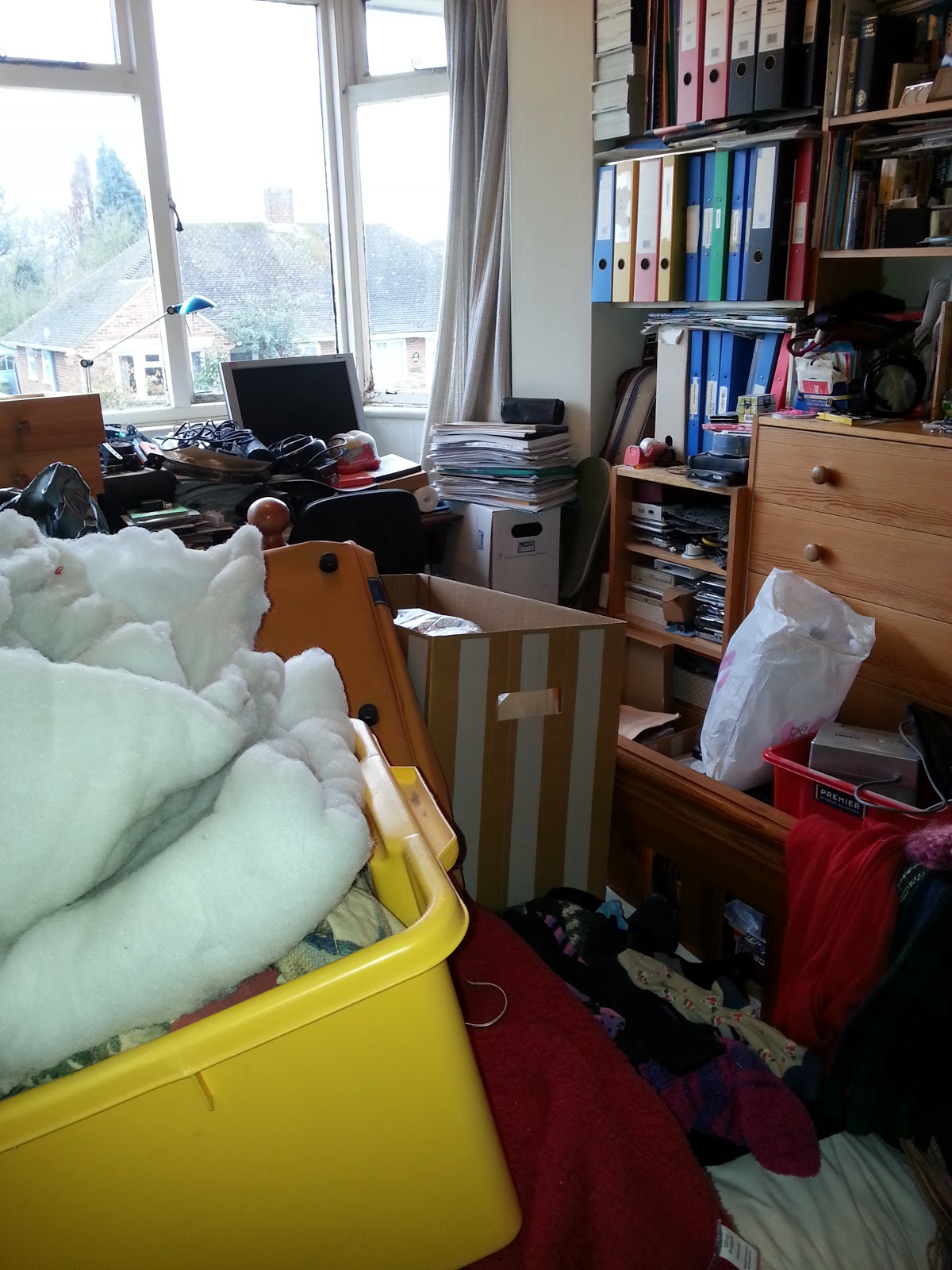 However, one tip-trip and several hours later, we ended up with the furniture re-arranged, the bed revealed, 5 bags of possibly useful stuff and a rug for the charity shop, one huge bag of rags for Help-the-Aged, one bag of bags to recycle, and the bins outside over-flowing. 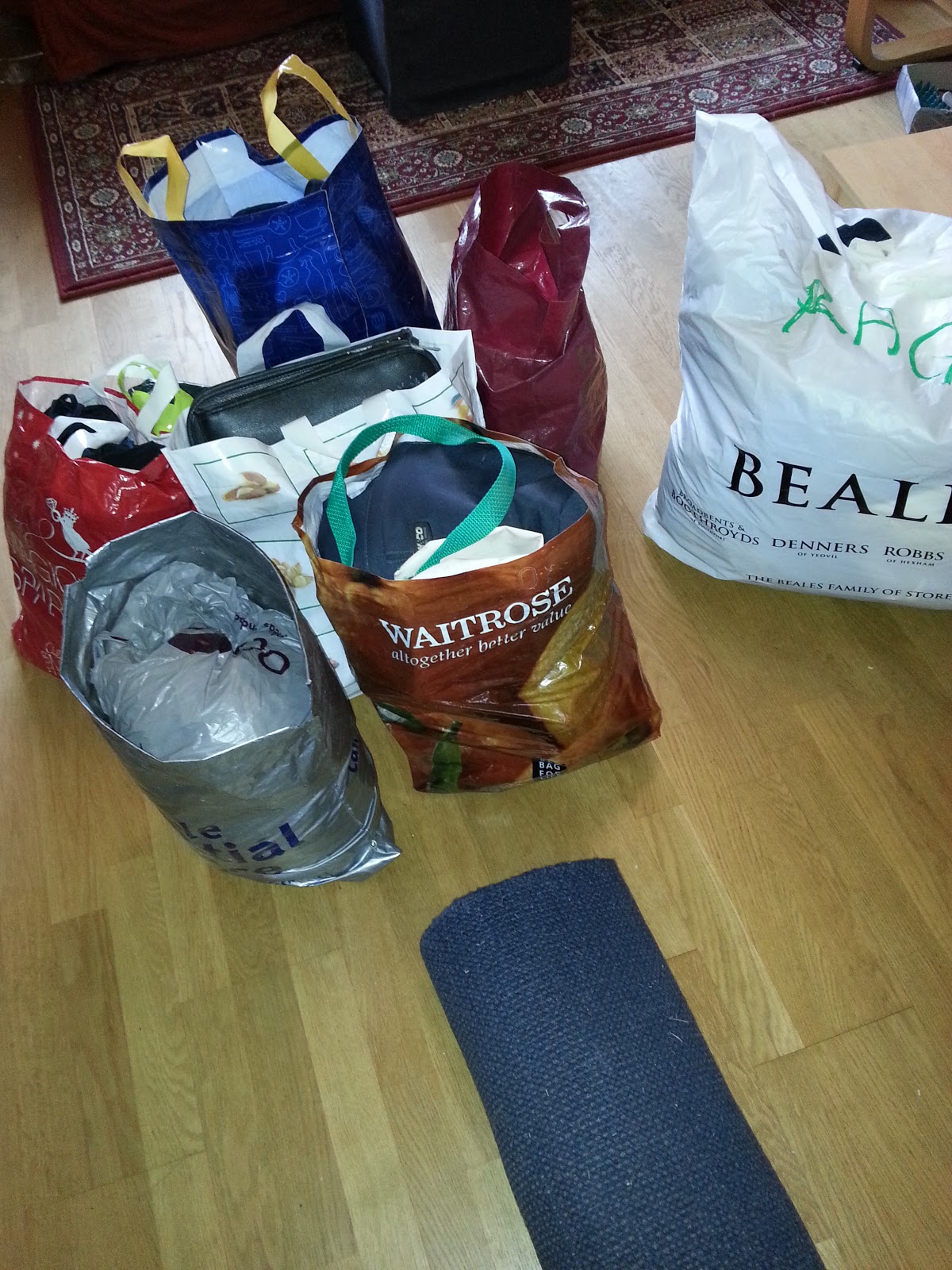 It is just amazing how smug, how light-hearted, we feel having divested ourselves of so much stuff that we probably won't miss. It also means I will easily achieve my New Year's Resolution this month (a bag of stuff to the charity shop every month). Actually, I give it ten days before we've encroached on the space....

We now have a choice of three places where the machine can go - the hall, beside the bed, and the sitting room. The machine is an oxygen concentrator; my lungs are pretty rubbish, and have been slowly getting worse. I have tripped over a threshold which means that I will need to have night-time oxygen. I'm getting used to the idea - and working hard at putting a positive spin on it. If I have the oxygen at night, it means that I put less strain on my heart and delays the time when I might need oxygen for longer periods of time.  The whole oxygen supply set-up is amazing - it appears that I can just ring up and say I'm going on holiday and apparently they will arrange for a machine to be available anywhere in the UK or even in the EU!  I was certainly able to call the help line on Sunday morning to aske about the actual dimensions of the machine, which they measured for me then and there.

Watch this space - it's being delivered on Thursday and I'll post a picture.