Today is the hottest day of the year so far.

Today we have made serious inroads into outstanding household tasks.

We could have tackled them before: there have been opportunities here and there, from time to time. When these windows in the schedule appeared, we usually just collapsed, catatonic on the settee, to be honest.

Eventually, the little tasks pile up, and irritate, like a wrinkle in your sock, or a stiff label in the back of your shirt. They actually "get under my skin", and the "not doing them" is worse that than "chilling out and taking a bit of time".

This morning, I got all the washing through the machine, and on the line. It was all dry by lunchtime. Hopefully I won't run out of steam before I bring it in and put it away!

I washed half the kitchen floor - which included the cupboard doors, and the back door and cat flap. He scrubbed up the rubbery bits where the door mat had stuck to the floor. We chucked said mat out. It was never exactly right anyway.

I took up the long dirt-trapper mat in the hall, which protects out beautiful oak floor from the tramp of 25 pairs of piano-player's feet every week. Today has been a perfect day for giving it a wash and leaving it to dry.

We went out to Homebase and bought another garden bench for the morning end of the garden, a replacement mat, a light bulb and some fuses for my father, some gardening gloves.

It was now lunchtime. Tuna mayonnaise sandwiches, sitting on the afternoon benches under the apple tree at the bottom of the garden. From this angle the garden looks - lush, maybe inviting. Fortunately you can't distinguish the mass of horsetail, bramble and goosegrass which is what actually fills the borders. 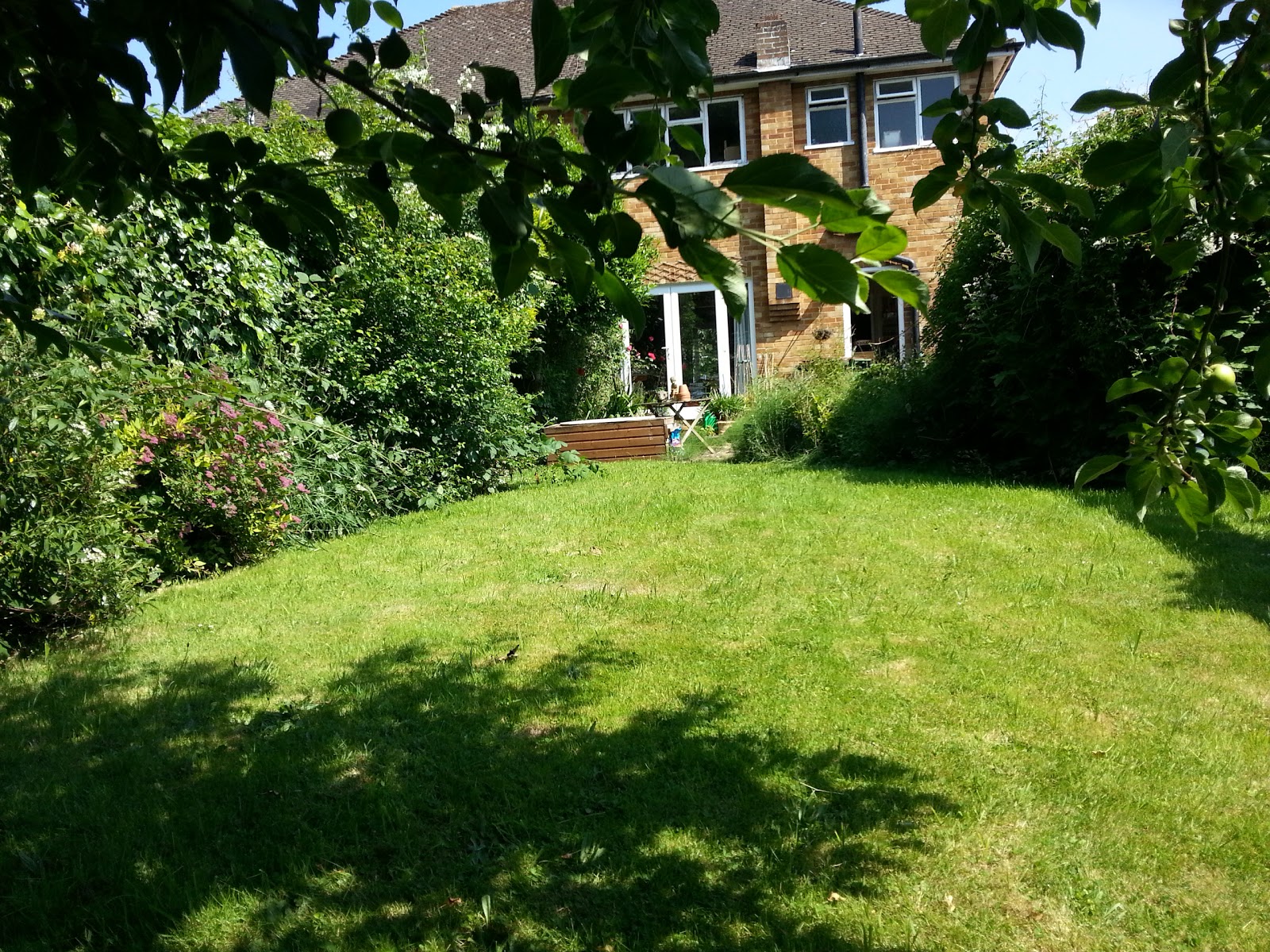 After lunch, he constructed said bench, and set it in the blazing sun, near the French windows; this the place to be catch the gentle morning sun, and to avoid to escape the burning heat of the afternoon.

He extricated the strimmer from the depths of the garage, and behold, or rather, hark, it still works. And there we stopped.

This is the scene that meets your eyes as you look out of the kitchen door. Somewhere in that lot is the barbeque, a couple of large potato grow-sacks, some bags of earth, and who knows what else besides. We did find the chimnenea, but U don't think we will be needing it today.

These are the "before" pictures, but as yet, there are no "after" pictures. 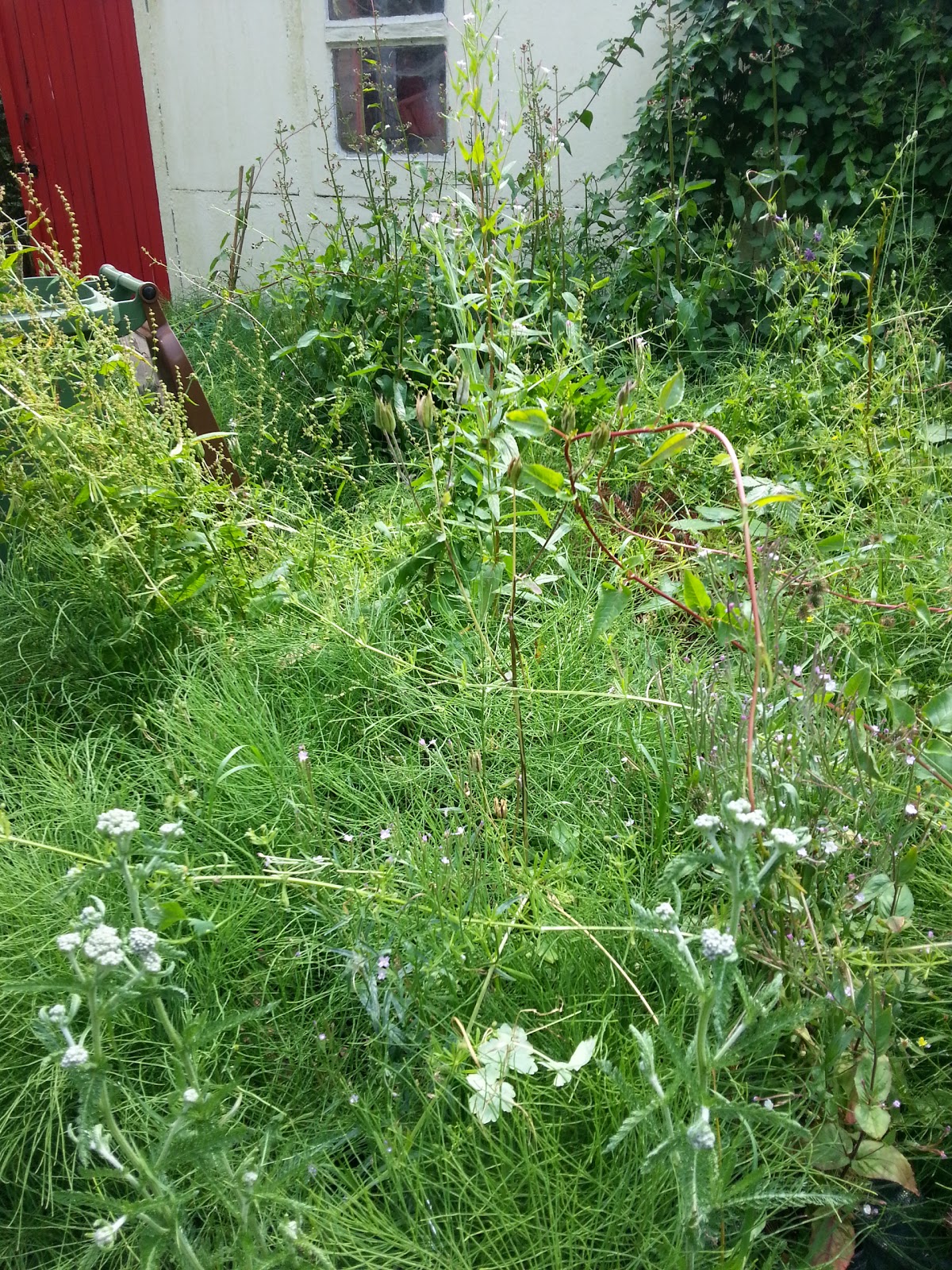 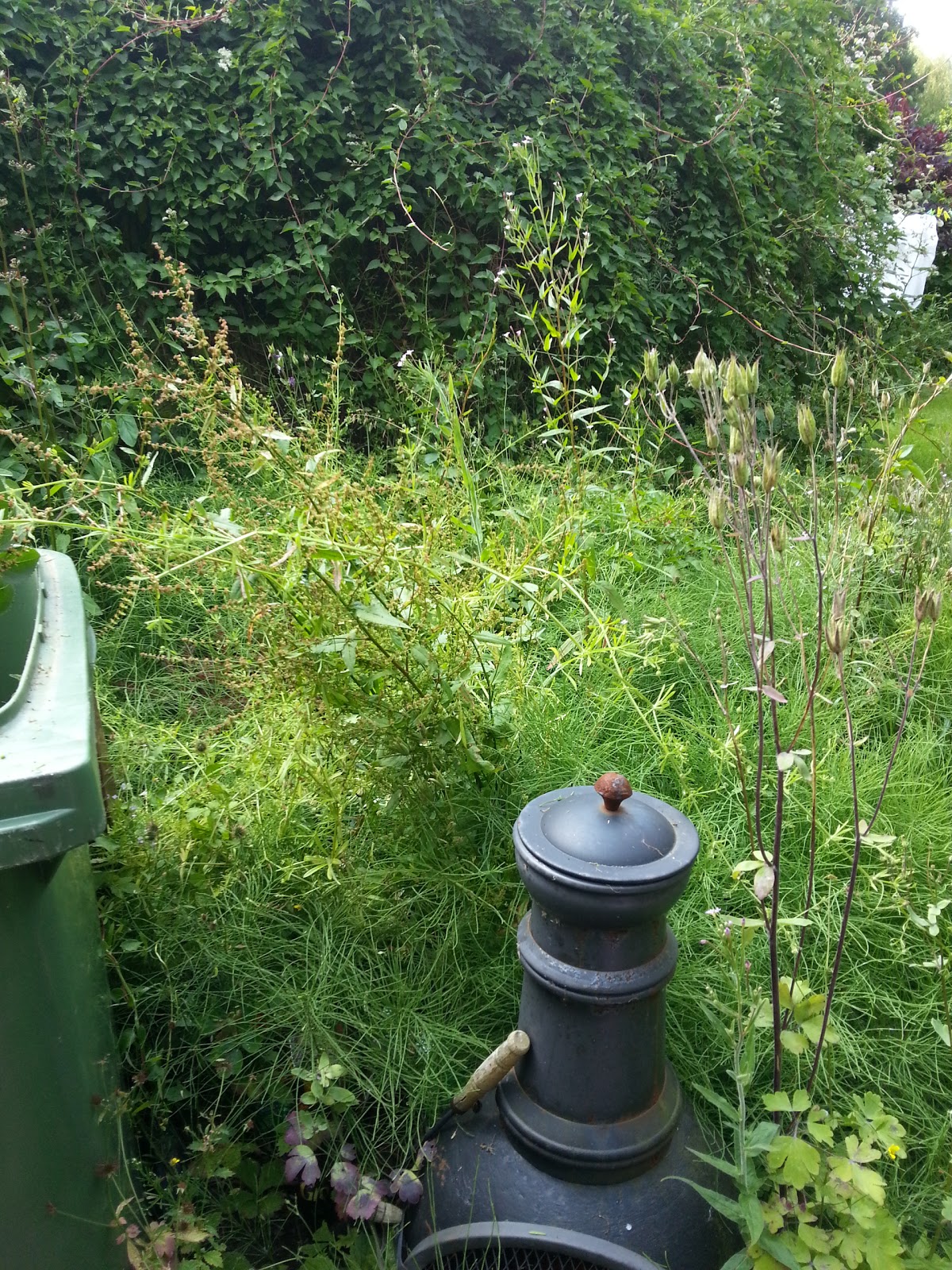 We tested the strimmer on another patch of horsetail and weeds, and it is definitely the tool for the job, as you can see by the results.

Today is the hottest day of the year so far.

And we have made sufficient amount of serious inroads into outstanding household tasks to alleviate the worst of the irritations that they were causing, for the moment, anyway.

And The Tennis Final is on!

Email ThisBlogThis!Share to TwitterShare to FacebookShare to Pinterest
Labels: gardening, too much to do