Saturday 21st December 2013 - The Ceremony of The Tree

We got the tree done!

Every year, I wonder if it won't be just fine as it is. 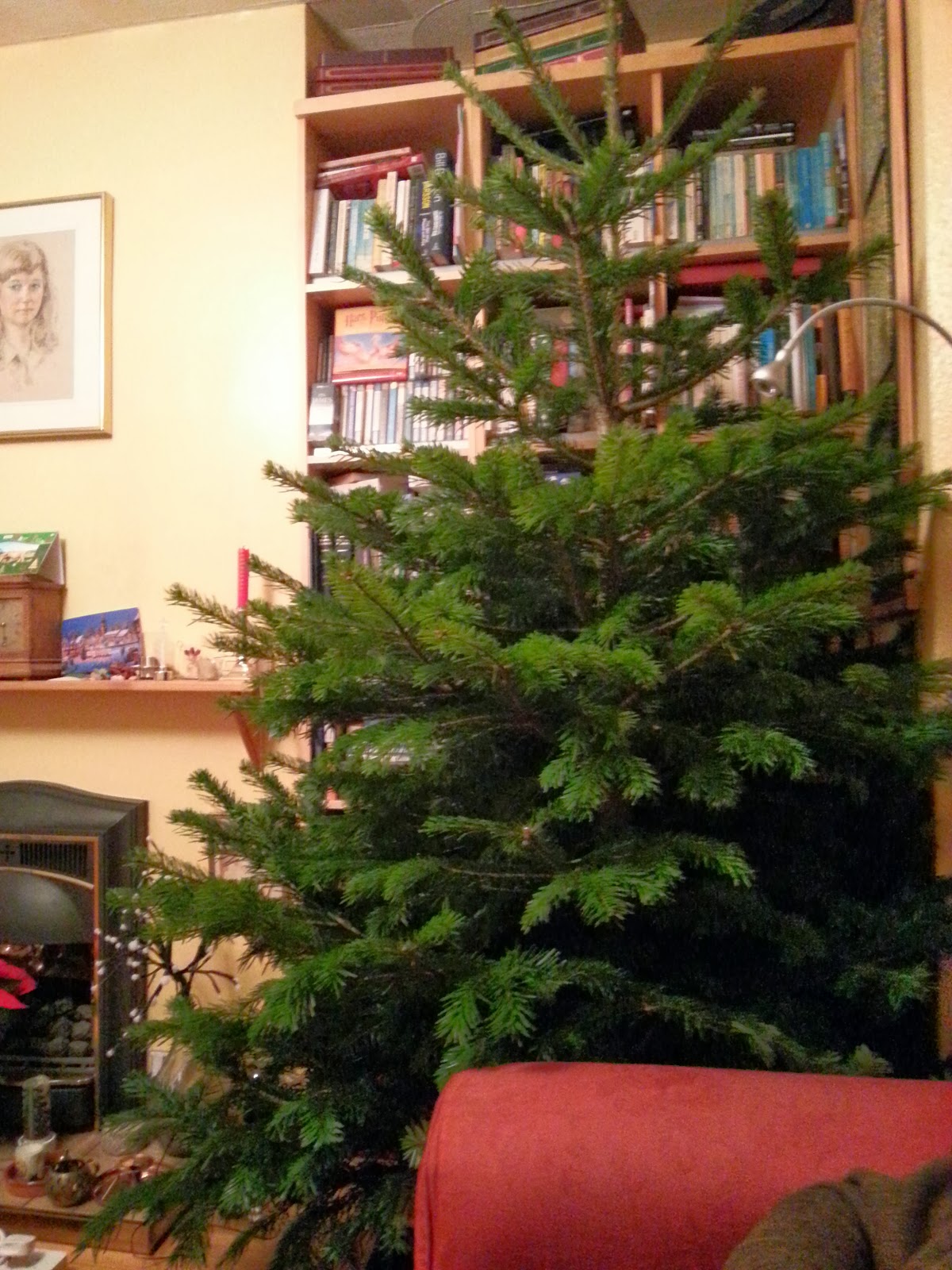 Then I give in and put the lights on - and yes, that was worth doing. But it looks so pretty, need I add any more? 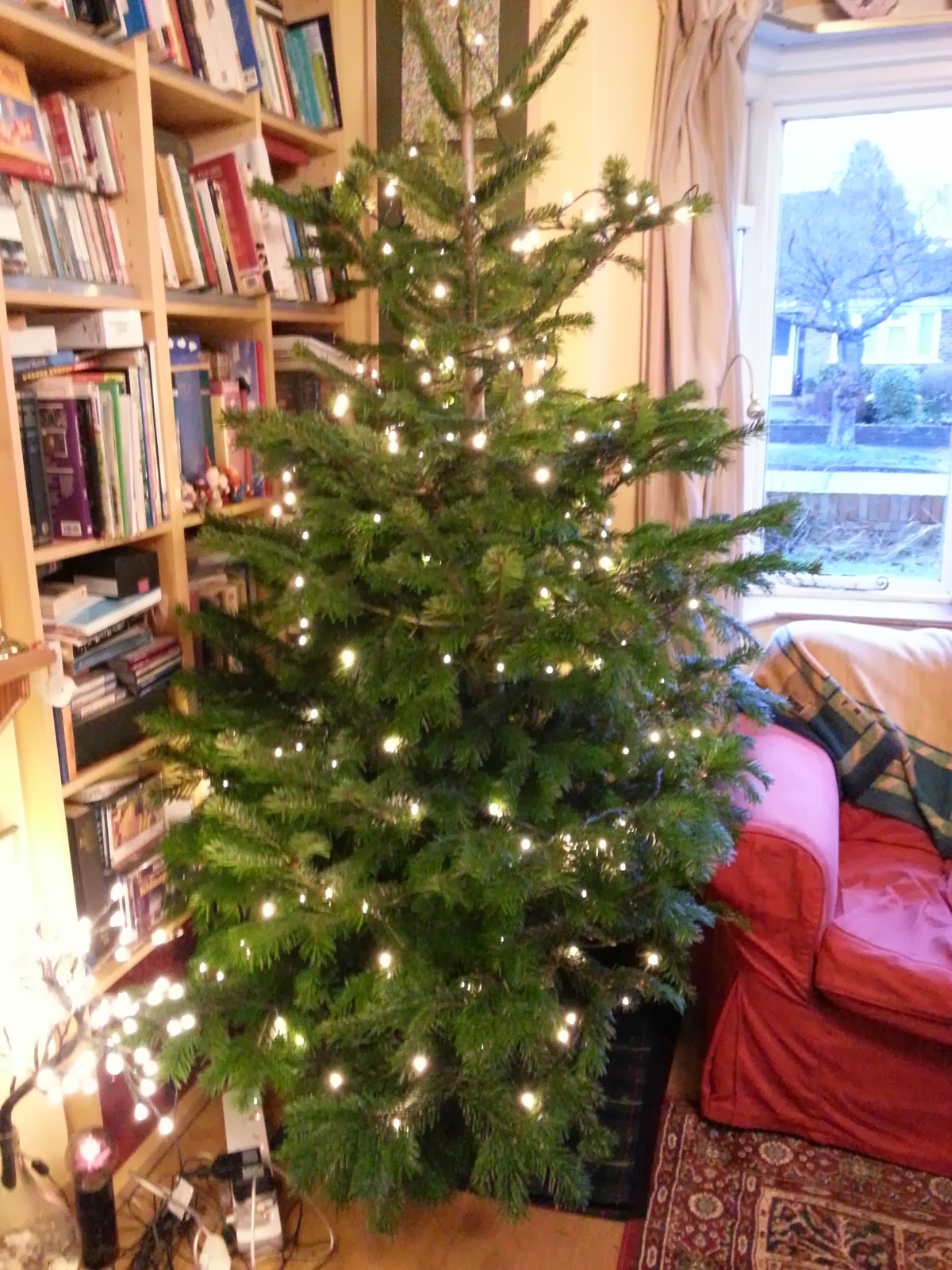 Tinsel next. "It has to lie along the branches as though it was snow" can you hear my mother's voice? No? Well I can, so there is no other way to put the tinsel on. 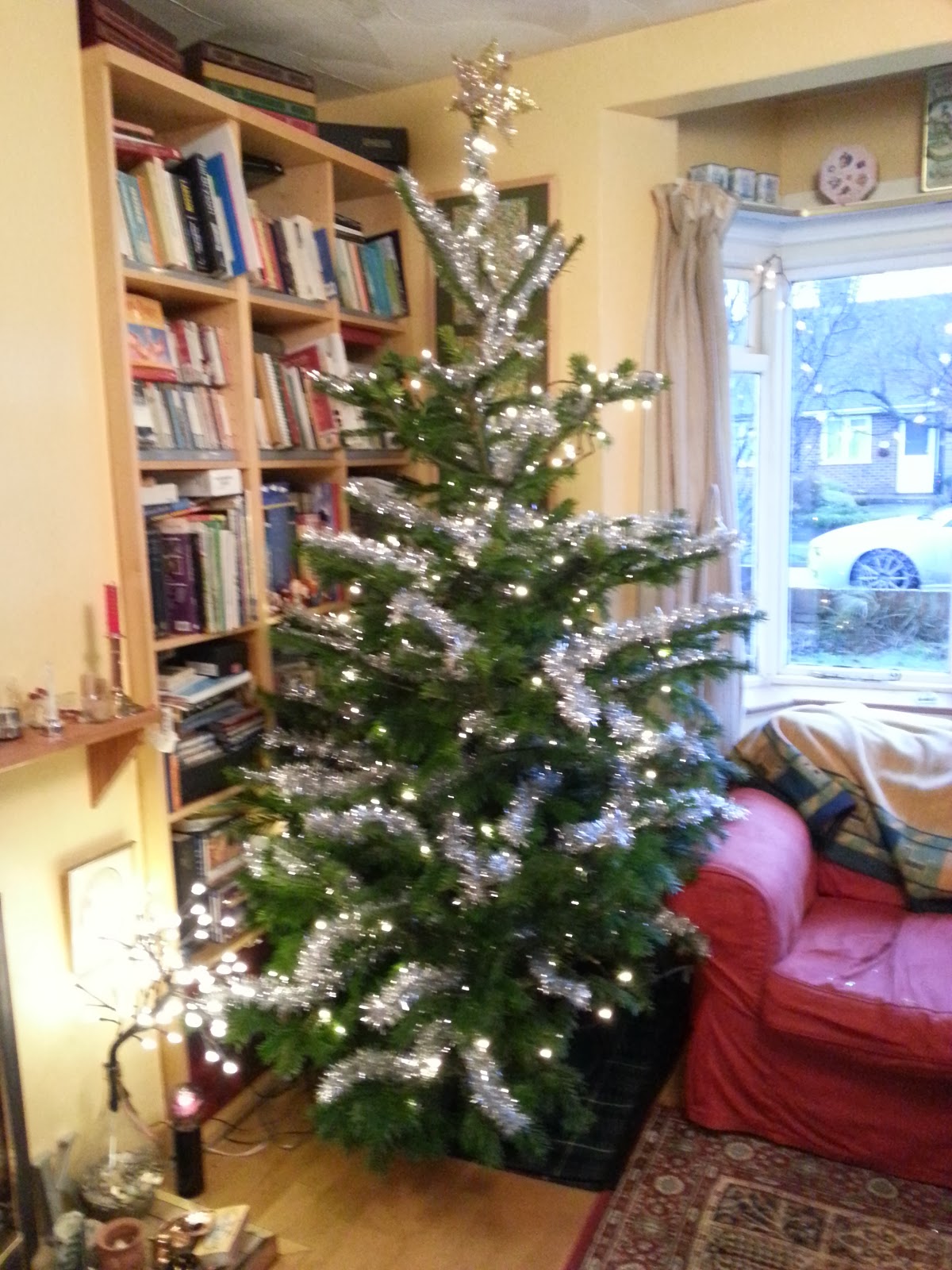 Baubles. Red and Silver, and, daringly, pale gold ones. Four of the baubles are from Woolworths, still intact since our first Christmas Tree in 1977. They are a bit faded and tarnished, but go up every year. 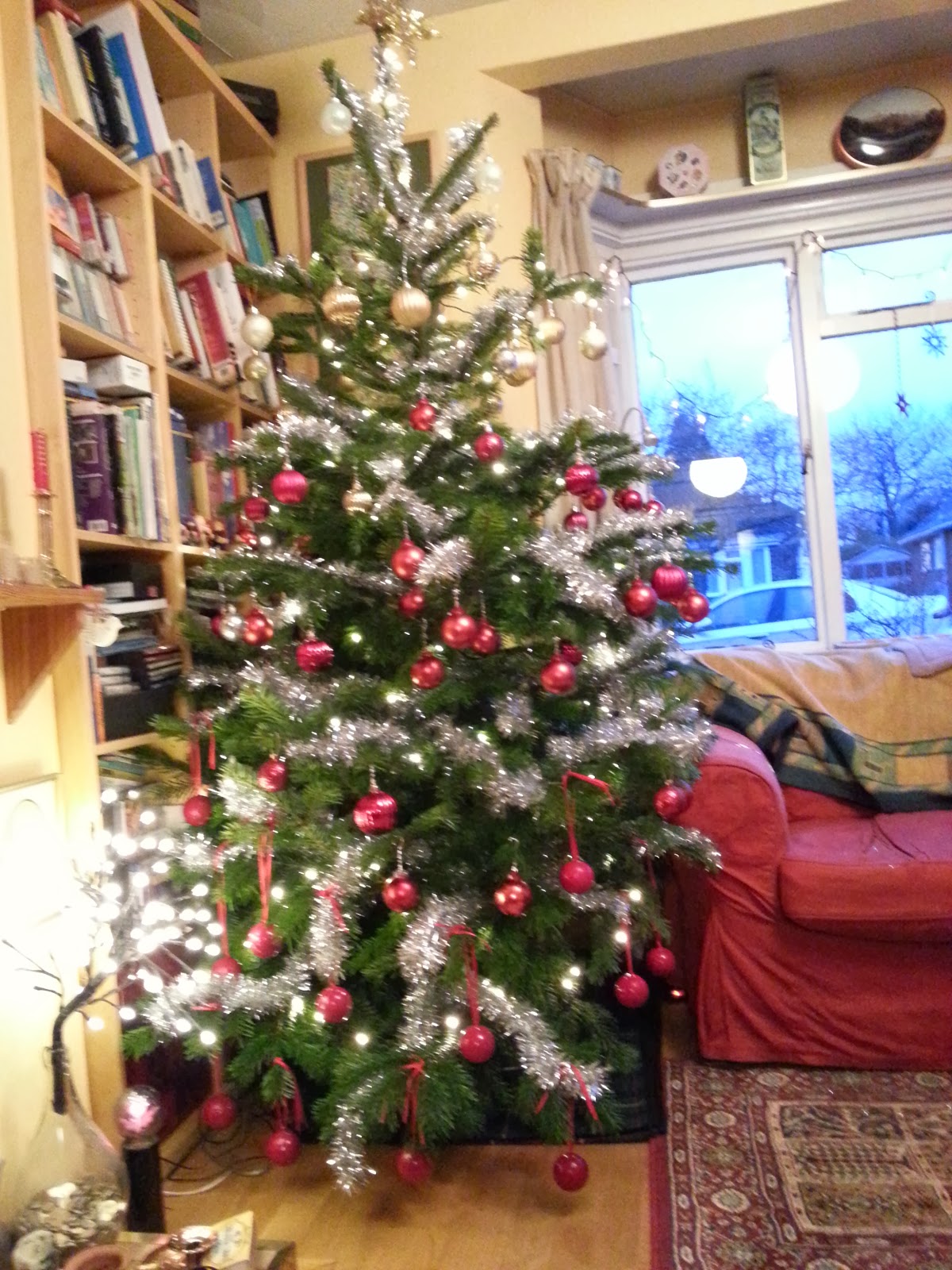 You might think that the tree was finished now, but no. Between 3 and 6 strands of lametta have to be hung over every single little branch and twig. 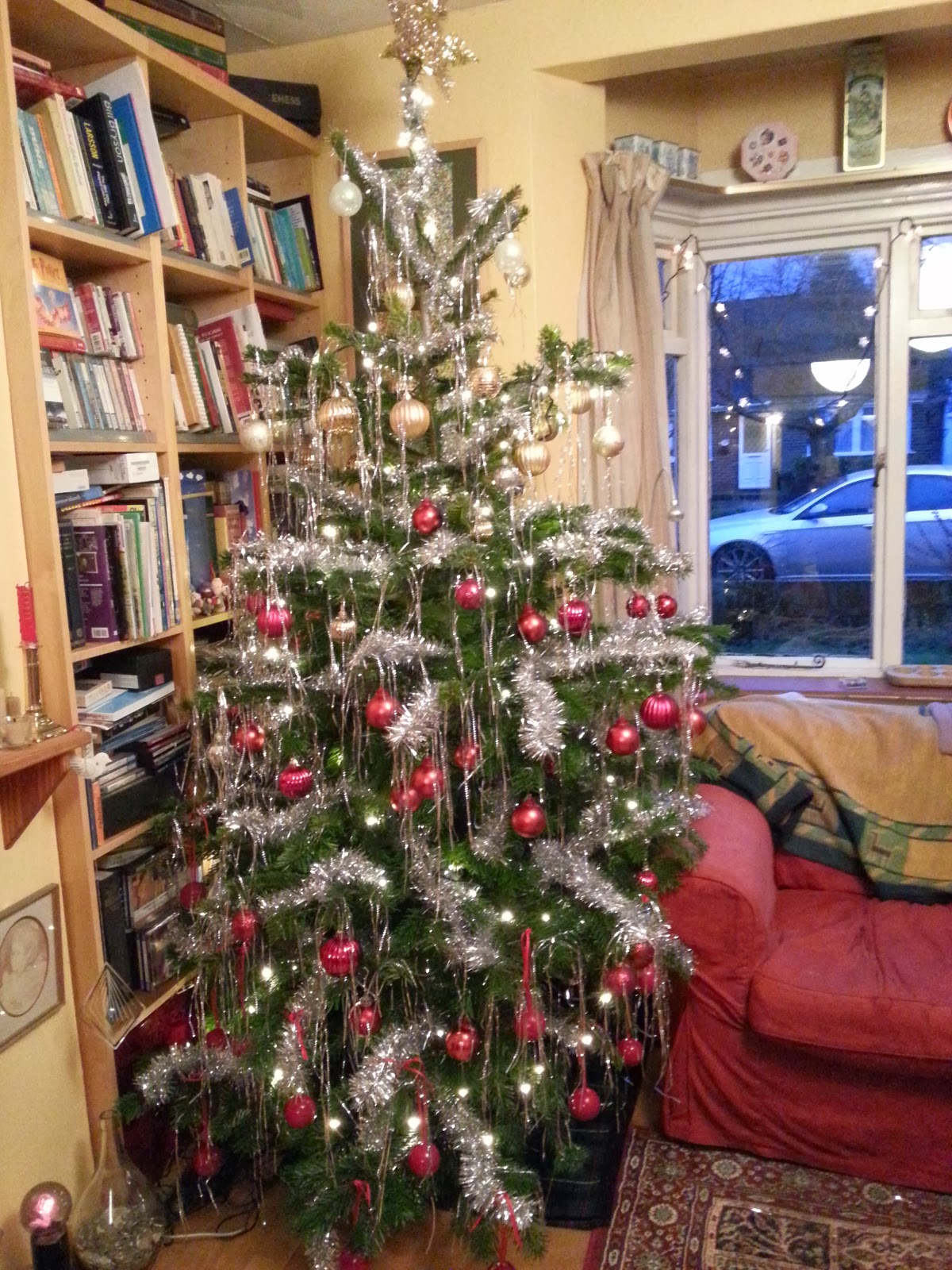 You might have noticed how the day was advancing; it took the whole day, off and on, to decorate the tree, with intervals for visiting parents, having lunch, wrapping a few presents that someone was going to come and collect, pause for a tea-break...

And in just over two week's time, we will be reversing the process and bracing up for next year. Christmas seems to go on for ever and ever, through December, and then, suddenly, The Day arrives, and Christmas is here, but for such a short time.

The little crochet Nativity figures I bought from Traidcraft a couple of years ago have been on the bookshelf for several weeks. 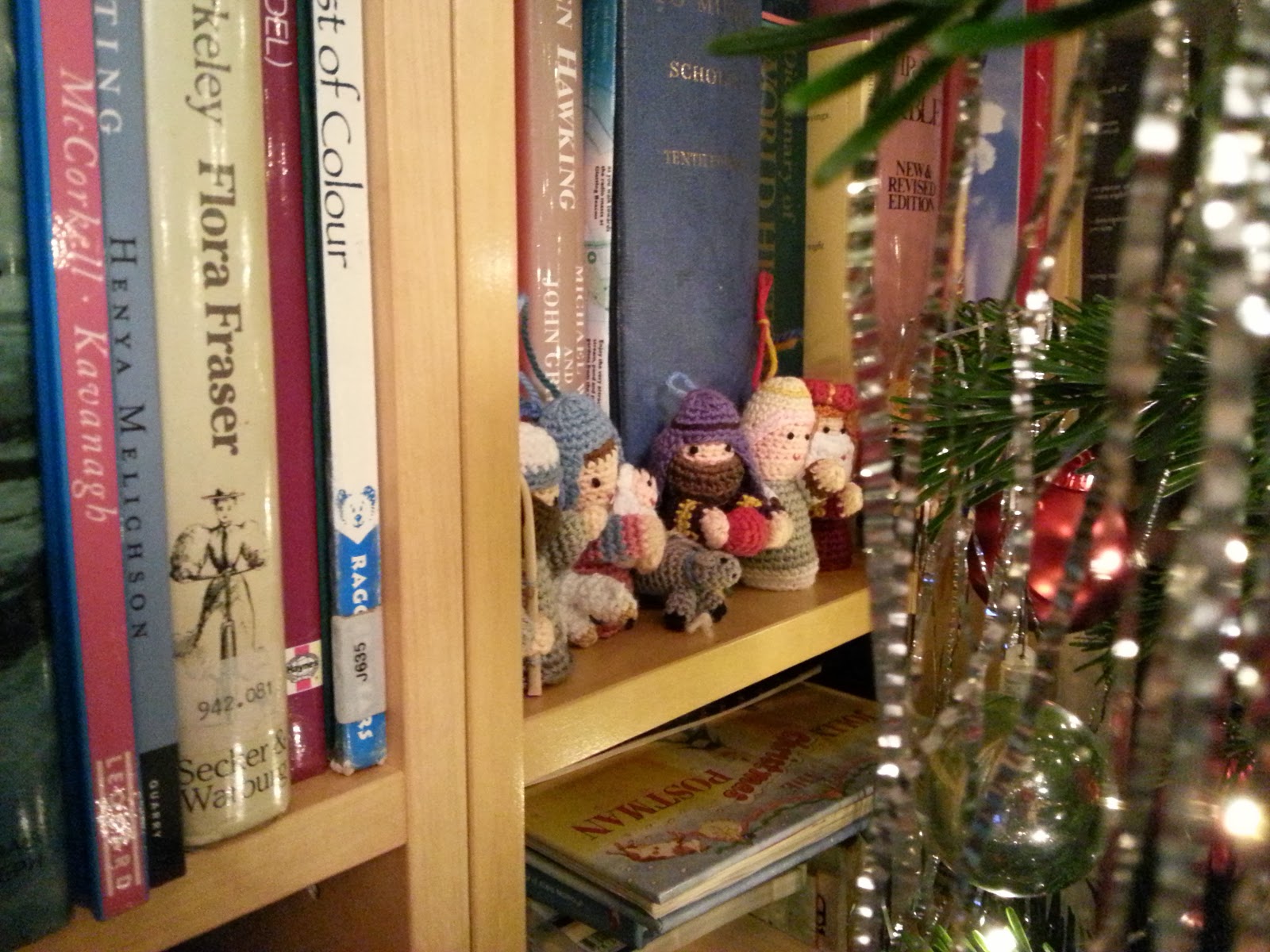 Now they are almost hidden by the tree; you might just be able to make them out now you know where to look, precariously balanced just in front of the "Oxford Companion to Music". A reminder to me; although as I am playing the organ at a Carol Service tomorrow evening, and for the Midnight Communion on Christmas Eve, and on Sunday 29th December, the Christmas story won't be far from my thoughts.

Email ThisBlogThis!Share to TwitterShare to FacebookShare to Pinterest
Labels: Christmas, my mother says