Well, it did rain on the parade, as our pictures show, but not too much.

How did the day start? With a trek across the country from Belfast, across the Glenshein Pass, to visit old haunts.

We started with the graveyard, to see BB's father's grave, but we drew a blank there. Unless it was the one grave with the illegible writing, or the other grave where the headstone had toppled over face down. So that's a task for another day, and probably after some research.


and some ruins just nearby. 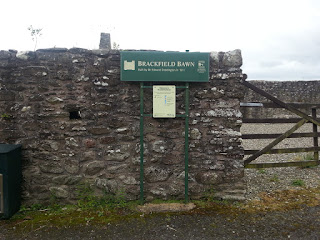 but it turns out that it is all that remains of one of the early plantain towns, called Brackfield Bawn, built by Sir Edward Doddington in 1611!

Located off the main Derry to Belfast Road (A6) the ruin of the bawn house dates to 1611, built on lands of the skinners company. This type of fortified house was a requirement of the Plantation of county Londonderry by the 12 London companies; it was designed by Sir Edward Doddington, who designed the walls of Derry. A survey of the site in 1619 shows a village of twelve houses and a church near the bawn and house.


Onwards, through the grey day, to Londonderry. The road that we wanted, down to the Craigavon Bridge was closed for some reason, so we went through various side streets until we reached the way down to the river. This was when we discovered why the closed road, and the increasing crowds, and then drummers and fifers and men in suits and ceremonial collars... It was the day of the Londonderry Apprentice Boy's Parades. Big Ooops. The next few pictures aren't too clear; they were snatched through the car windows. We found ourselves literally IN the parade. A harassed steward guided us through the various bands, which were lined up ready to go, and lodged us in a space to one side.

Each group was lead by a mace bearer, leading first the drummers (snares, and a bass drum) and several rows of fifers. This was always followed by lines of men wearing suits, white gloves, sometimes bowler hats, and always the braided "collarettes". Finally there was a black, highly-polished car, or sometimes a minibus, carrying the veterans. And, for one band, us!. As they approached the bridge to the old town, we were guided off to the left, and out of the parade. Phew! 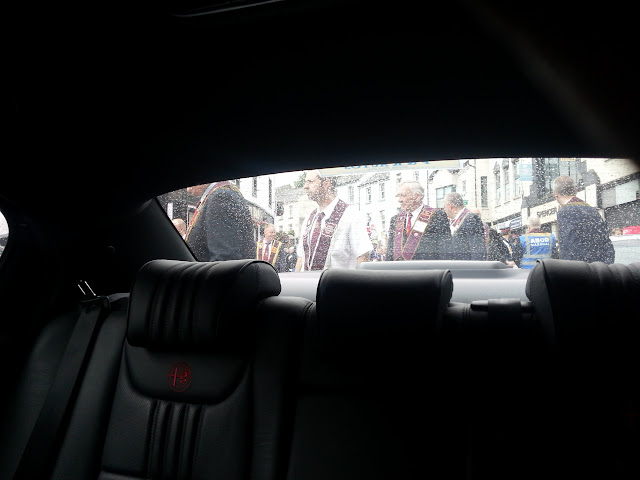 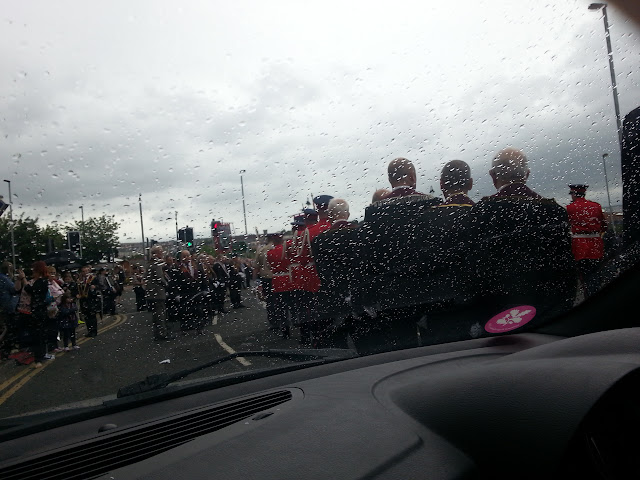 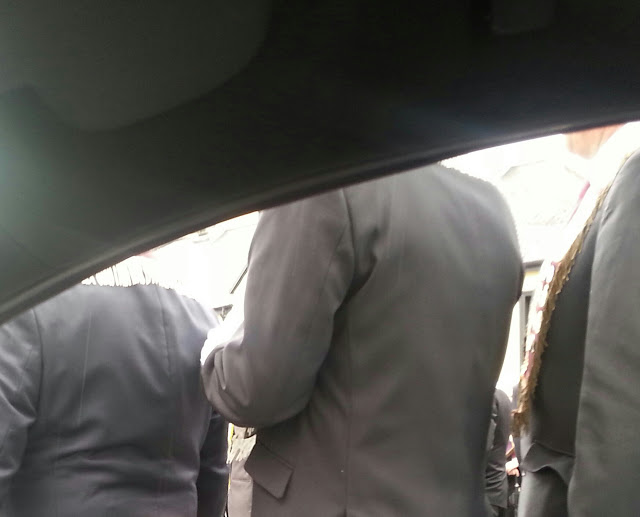 Intruigingly, the Craigavon Bridge is a double-decker bridge, so we were able to cross on the lower deck while the parades whistled and thumped their way above us. For future reference, the day to avoid (or aim for, depending on what you want) is the second Saturday in August.

Needless to say, most of the shops, and the cathedral and the museum, in the centre of the town were all closed. The modern enclosed shopping centres away from the main parade routes were open, so we were able to park in the multi-storey car park and wander around the city walls, looking out at the distant hills, or down at the parades weaving their way through the narrow streets below.

The atmosphere was generally a sort of seriously light-hearted. The sentiments behind the parades are clearly no laughing matter. Just beside the wall were the dying remnants of what had clearly been a HUGE bonfire; the houses closest to the fire all had boarded up windows to protect the glass from the ferocious heat.

In the streets behind the parades were plenty of police and armoured vehicles "just in case". We left around 4pm, after the last band had done the route and the clearing up was in progress.

We had no trouble, and I guess the same could have been said for most, if not all the people present.

Londonderry looks to be a lovely city, full of interesting places to see, and I look forward to going back sometime. When it is sunny. And the cathedral is open!