First Quarter 2013
The cooker non-functional for the whole of January after exploding with a BANG as we took out the turkey on Christmas Day. Mummy still in hospital in rehab after her stroke at the end of October. She came out in February. Total domestic chaos for everyone while we all worked out how to manage everything. Also, I was trekking up to London for overnight hospital tests and investigations regarding lung problems in  February and March

First Quarter 2014
BestB headed towards retirement, just in time to sort out his sister's affairs which took up most of his non-working time.

First Quarter 2015
My parents moved to their present flat, which took several months of planning, moving, and settling in. I was ill most of the time with what turned out to be side-effects from one of the medicines I was taking (I've stopped, and am back to normal). We also had a new driveway done - very chaotic but Most Excellent.

First Quarter 2016
Well, if you've been following this blog, you will know all about my mother's illness and everything. Now we are all reshaping our lives, clearing up, sorting out, which will be on-going for a good wee whiley yet.

It seems that the beginning for every year has been a whirlwind; illness, chaos, disorganisation, unexpected events, challenges...

Every year has begun with snowdrops under the apple tree, shy, easing into flower around Christmas Day and staying with us for several weeks. Then came the catkins, almost overlooked. Early daffodils by the roadside in certain special places, the first camellia, a rhododendron in a rush to be first.

Only last Friday, driving from one school to another, the verges were a mass of primroses glowing in that particular greeny-yellow shade. (Do you remember that field of primroses, or maybe cowslips? that we used to look for up on the right, near the top of a hill, as we drove to Cornwall in the Spring? No idea where it was on the route, but we always watched for it.)

Ever since I started this job where I drive all over the place from one school to another, I have been mesmerised by the flowers, trees, skies, leaves. At the end, whatever has happened, however it goes on, there's always something around that will pick me up again. 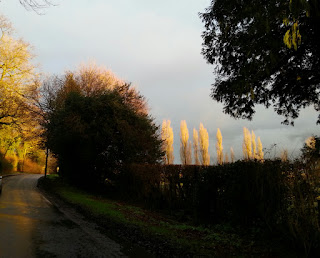