Sunday 27th August - Now, what has been happening?

Let's see - last post was 10th August. I've enough for a score of posts since then - every day, it seems, except today, has been packed full.

So, I'll start with today and work backwards.

Nothing - well, almost nothing has happened. I guess the main event has been high-speed croissants for breakfast - but more of that in yesterday's post which will be coming up next.

I have learned how to crotchet - well, that started last night, after I ripped back the scarf I had been knitting while in Northern Ireland. The scarf was a failure - I was going round and round on circular needles, and when I cast off it rolled itself up into a nasty narrow snake.

I'd always thought of crochet as a Dark Art, and apart from a roundish coaster which I made in the August-of-making-something-every-day a few years back, hadn't really done anything. (I'm not counting the Tunisian Crotchet Blanket Project, which has stalled at the sewing-together phase).

And perhaps late at night, after a glass of wine, and in poor light, was a bad time to start. But, it seems to be going ok for now. 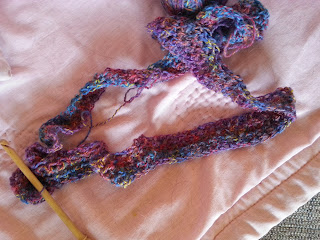 The peace and quiet of today has been blissful. I haven't had to talk to anyone (except BB) all day. He's had to sort out next-door's computer, (which was just checking that the neighbour next-door had got the order right for his new machine. He's finally moving off XP, which I gather is Significant.)

But apart from a few pleasantries with the other neighbour on the other side, I've had a day off "peopling". I'm beginning to feel human-ish.

Right. It will have to be new posts for the other days - too, too much for just a single news bulletin.
Posted by KirstenM at 17:10:00