Leaving a school where you have worked for fifteen or more years is slightly difficult - not the "leaving" bit, that was quite hard, but the actual handing over your security access key and walking out of the door.

Had I said good-bye to everyone, everywhere?

Well, that's that, I've gone now. Just endless folders on the computer, shelves of lists and lesson plans and resources, several hours of pressing "delete" or chucking stuff into recycling... and hopefully I'll be clearing a few inches of bookshelf space and a few bytes on the computer, and reclaiming a few hours of time.

They gave me these; 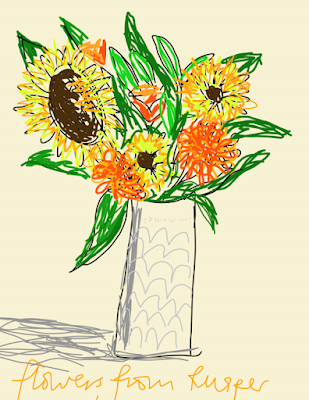 I enjoyed doing this rough sketch on the note-taking app on my tablet, using my finger instead of the stylus. The vase is a straight cylinder...

Then - time, time, time - but I felt cranky and out-of-sorts. Eventually, after lunch, I copied a quick water colour of the Venice Lagoon 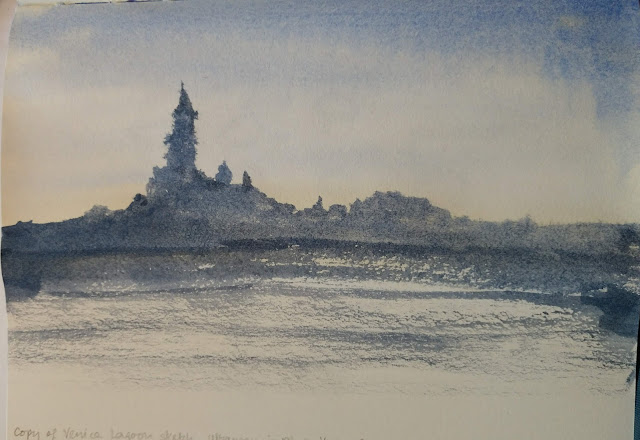 Result! I have learned how to do water by letting the paint break up as you brush over the paper! The tower is a bit fuzzy because I didn't wait long enough for the sky to dry. I'm still using the journal that daughter gave me for all these try-outs; there's something about a brand new sketchbook that is too intimidating. I have a method of avoiding the "I don't want to spoil the first page" syndrome which I can recommend; start on the last page and work backwards... Although some future viewer of my sketchbook might puzzle over why a relatively adequate start got worse and worse as they progressed through the pages...

Then He had the bright idea of going for a jaunt to Hove - no, not the sea front, but two of my favourite shops are on opposite sides of the same street - Lawrence, the art shop, and Ackermans music shop. Both with air-conditioning. So I had a splendid time in the shops, buying brushes and just one half-pan of watercolour (what is the difference between yellow ochre, which one art book suggests, and raw sienna? Almost nothing - the raw sienna is fractionally more brown. One writer states that the raw sienna won't make greens, so that could be it - using raw sienna might cure some of the dullness I am getting. Aha. I'll give it a go!) Meanwhile He prowled around in the sweltering sun, and found a water sports lagoon where you can go wakeboarding which looks like crazy good fun for lots of people... (not me!)

The music books were just a selection for pupils - what might enthuse this boy, or that girl, and how to move a talented child onwards with technique... The "Dozen a Day" exercises that I used to do when I was a 9-year-old are still some of the best on the market. Book 1 is seemples, Book 6 would give me serious pause for thought!

I'm ecstatic that all three pupils passed their music exams; one will be delighted that she passed (a bit close, but she was touch-and-go), another will be happy with his merit, and the last might be disappointed that he just missed a merit (but he is very young, only six, and gets distracted by Everything!). I'm waiting for the written reports to get an idea of what actually happened in the exams. This morning's "eat the frog first thing in the day" was texting all the parents to let them know.